823. New Birds Of Prey Stamps From Singapore; A Dull Stampex. 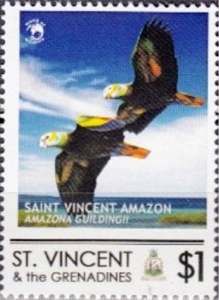 A set of 4 stamps inscribed St. Vincent And The Grenadines depicting the St. Vincent Amazon parrot has appeared. This does not look like one of the run-of-the-mill IGPC issues, having the appearances of actually being on sale in St. Vincent for the use on the mail of the general public. Unfortunately, this does not seem to be the case as explained in the Comment at the end of this blog by Stewie1911. It's a pity that these are not true issues from the St. Vincent And Grenadines Post Office as they are very   attractive. I was taken in by these stamps and gave the "issue" 5 stars but, given Stewie1911's helpful information, it of course gets a rating of 0. 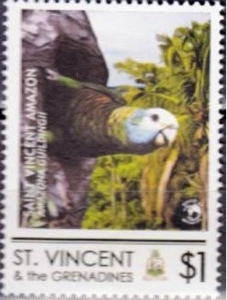 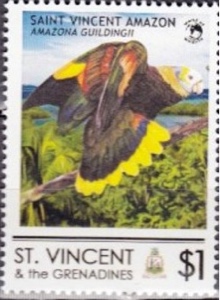 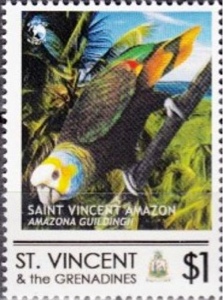 A second excellent set of 4 stamps on the subject of birds will be released by Singapore Post on 21 September 2016 depicting birds of prey. The lovely stamps were designed by Lim an-Ling and lithographed by Secura and perforated 13. Rating:- *****. 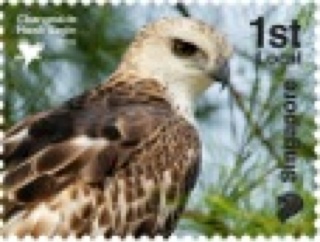 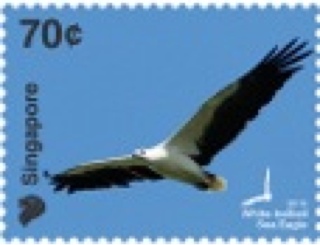 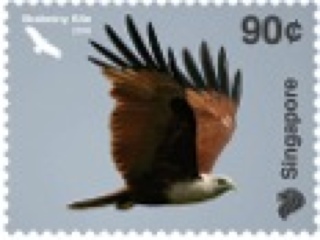 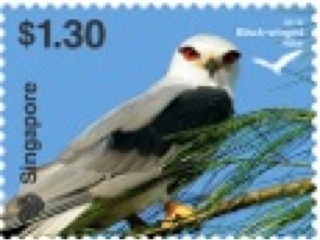 I visited the Autumn Stampex 2016 Philatelic Exhibition on its second day in a hot, sweaty, noisy, unfriendly London, which I always hate to visit not only because it's such an unpleasant city but because it's such an expensive place as well.
The atmosphere at the exhibition was hot and sultry, dealers looked worn out by lunchtime as the heat bore down on them and the number of visitors looked more like a trickle than a flood. There was quite a fair bit of activity around the Royal Mail stand - there was actually a modest queue - and a few individuals were embracing the joy of the "Post and Go" kiosks from which they able to buy Royal Mail's "poppy" labels with World War I tanks printed on them as well as the new "Ladybirds" labels, new Jersey Post "Beetles" labels and the Royal Gibraltar Post Office "Barbary Ape" labels with the UNESCO World Heritage Site inscription applied to them. 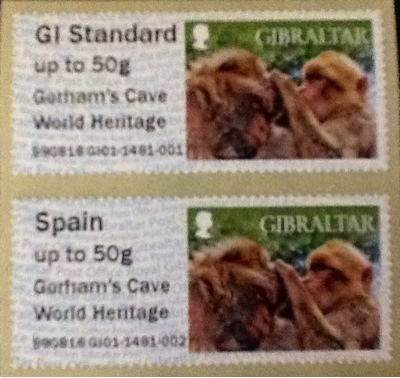 There was nothing new or exciting at the exhibition. It seems to have grown very stale. Apart from the Royal Mail stand, only the Isle Of Man Post Office had bothered to take a stand for its philatelic bureau and neither Jersey Post or Guernsey Post were represented although 2 Jersey issues were being sold by the Isle Of Man stand. The Isle Of Man stand was selling an enormous variety of items, many expensive, and very few having any relevance to the island itself. I didn't buy anything.
There were quite a lot of stands selling European stamps - I wonder if Brexit will affect that in the future. In contrast it was quite difficult to find anyone selling Commonwealth new issues though Nigel Haworth had a stand there with some exciting items including some of the Papua New Guinea surcharges which I've recently highlighted.
Eventually, desperate to spend a little money at least, I visited the Stanley Gibbons stand and treated myself to the latest edition of Gibbon's "Indian Ocean" Catalogue which is worth commenting on, perhaps in the next Blog.
I found that I needed to spend little more than a couple of hours at the exhibition - there was so little worthwhile to do there. "Stampex" really needs some life injected into it and to be elevated from the late 1990's to the mid 2010's. It needs something to make it worthwhile spending time and money to get there from anywhere further away than the Home Counties, the South East and London itself.     Perhaps talks, demonstrations and lectures of interest to the general philatelic public could be introduced, the display of more interesting exhibits and even a change of venue to a more user-friendly site might help. In fact, why is it necessary to hold the national exhibition in London twice yearly? Perhaps one show of the two per year could be held elsewhere in the country - it's hard for the London-based self-styled elite to accept I know, but as the vote for Brexit showed, Britain doesn't end at Watford - in some ways it begins there!
I really don't see myself spending time and money to travel to London twice yearly for something as dull and physically uncomfortable as my visit to Stampex yesterday proved to be. Rating of Stampex:- **.
And so, inevitably, to this weeks philatelic products from the notorious Stamperija philatelic agency. This week the names of 2 Commonwealth countries are inscribed on these products - Sierra Leone and Solomon Islands.
The Solomon Islands products take the form of 13 "sheetlets", each of 4 "stamps" with 13 accompanying "miniature sheets". The miscellaneous subjects are illustrated by some execrable art which, in the case of some of the portraits used on the "stamps" amounts to being little short of insulting with remarkably awful depictions of Queen Elizabeth II and her grandson, The Duke Of Cambridge, among others. The featured subjects are:- the 90th Birthday of Queen Elizabeth II, the 1st Birthday of Princess Charlotte of Cambridge, the Red Cross and the Zika virus, "Philataipei 2016 World Stamp Championship" Exhibition - Chiang Kai-shek, "A Tribute to Prince" (a deceased US popular singer), World Youth Day, 50th anniversary of the death of Walt Disney, Sochi Winter Olympic Games medallists, 500th anniversary of Royal Mail, 75th anniversary of the death of Robert Baden-Powell, 75th anniversary of the Japanese attack on Pearl Harbor, 30th anniversary of the Musee D'Orsay, 135th anniversary of the birth of Pablo Picasso. Rating:- 0.
I depict a few of these items to give an impression of the dreadful art but do not include the whole set in order to avoid disturbing anyone of an artistically sensitive nature:- 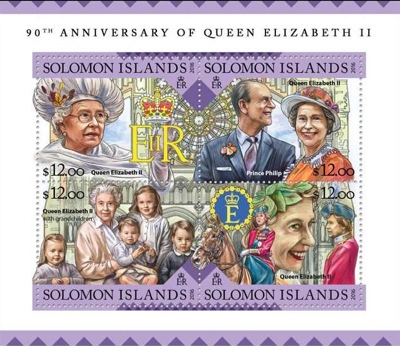 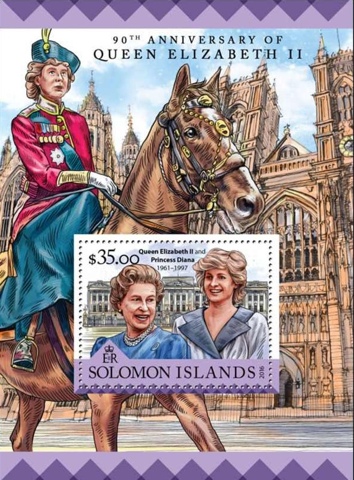 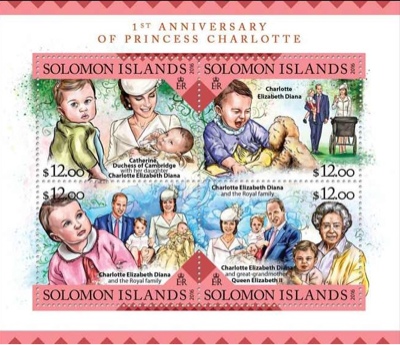 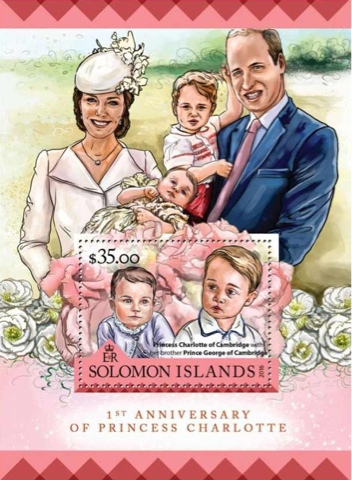 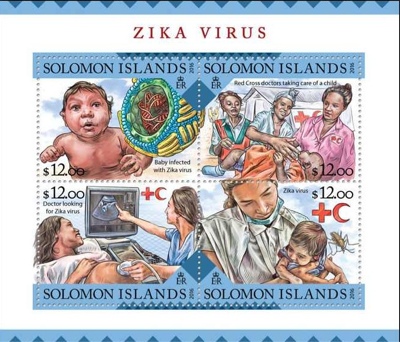 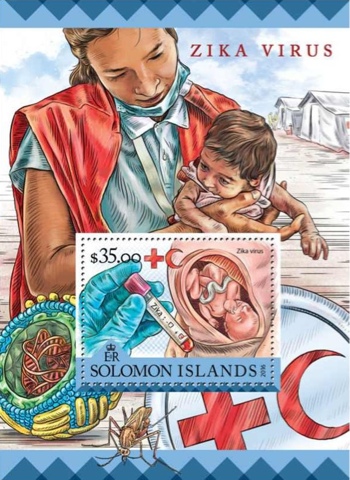 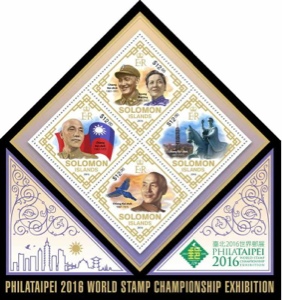 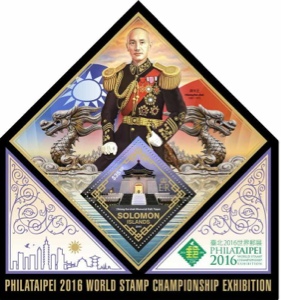 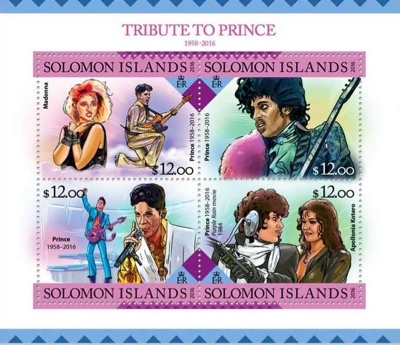 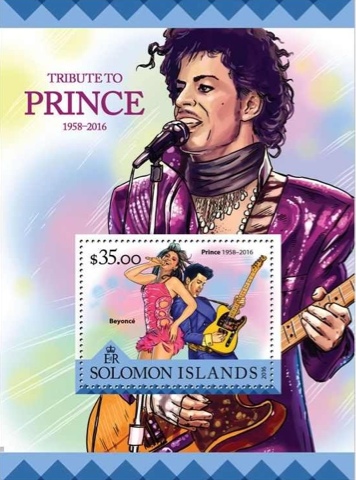 Issued in the name of Sierra Leone come another 10 "sheetlets", each of 4 "stamps", and 10 "miniature sheets" on the subject of Art in exactly the same style as those items reported in Blog 815. The featured subjects are the art of Joan Miro, Vincent Van Gogh, Leonardo da Vinci, Peter Paul Rubens, Pierre-Auguste Renoir, Raphael and Qi Baishi as well Japanese art, American Impressionist art and Russian religious art. I depict only one of these as they are all identical in format and life's too short to waste time uploading this sort of stuff to the blog. Rating:- 0. 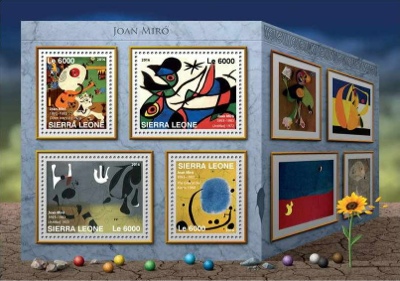 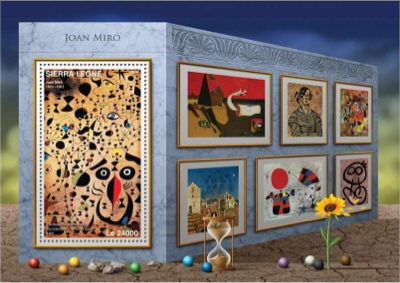 From the New York-based philatelic agency, IGPC, come a sheetlet of 6 different stamps and 1 miniature sheet inscribed "Antigua And Barbuda" on the subject of the 130th anniversary of the Statue of Liberty which clearly must be an anniversary of great importance to Antigua though, for the life of me, I can't see why. Rating:- 0 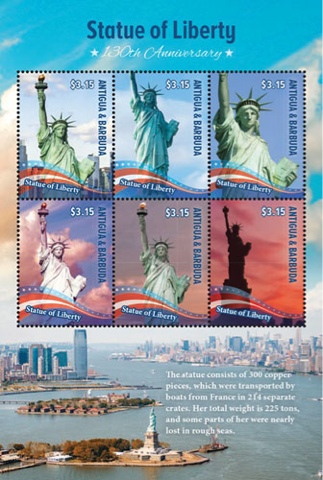 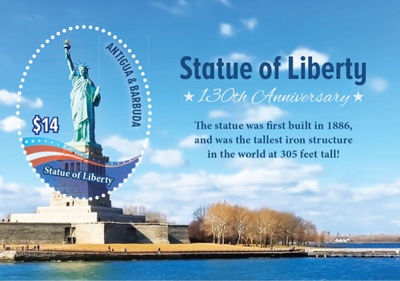