578. Stamperija Features The Sacred and The Profane.

On 2 June 2015 Australia Post will issue a set of 4 stamps and various other items as detailed in Blog 555 on the subject of "Islands of Australia". The featured sites are Bruny Island in Tasmania, Phillip Island in Victoria, Lady Musgrave Island in Queensland and the Buccaneer Archipelago in Western Australia:- 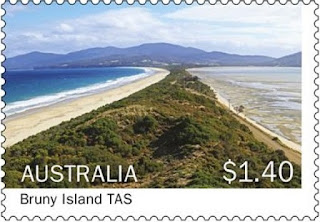 The Gibraltar Stamps website has announced that it is now offering Collectors' strips of Post And Go labels for sale at a price of £6.24p and states that it is "now very proud to have joined the Post and  Go family". The website gives the date of issue as being 13 May 2015, the opening day of the Europhilex Stamp Exhibition 2015 in London, where Gibraltar Flag Post And Go labels were dispensed from IAR kiosk GI01 (see Blogs 570 and 574).
The illustrations of the Collectors' strip show that the labels on sale on the website originate from the back office kiosk B002 which is situated in Bristol in England which is 1599.5 miles (by ferry and road) from Gibraltar. That's an awfully long distance for a Gibraltarian to travel if he or she wants to put a coin in the kiosk and buy a Post And Go label/stamp for use on a letter which of course has to be posted back home in Gibraltar (another journey of 1599.5 miles) and would not be valid for postage in Bristol.
It really is complete nonsense. This really does seem like an Alice In Wonderland concept at least until a kiosk is established in Gibraltar itself - I have seen nothing to suggest that there is a prospect of that happening in the near future. 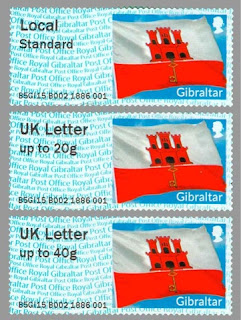 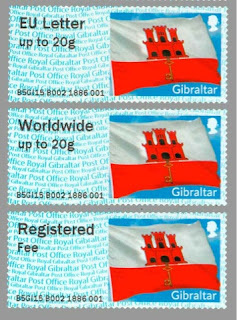 The Cayman Islands postal service has released a set of 4 stamps and 4 accompanying booklets as the second in a series on the subject of local heroes. I do not yet know the precise date of issue:-

Meanwhile Stamperija carries on regardless and has announced its latest release of philatelic products, this time with the name of Solomon Islands printed on them. There are the usual 10 sheetlets each containing 4 different "stamps" as well as 10 accompanying miniature sheets which feature an eclectic and random list of subjects which may or may not have anything to do with the Solomon Islands. For the record (and no other reason) the subjects featured in this latest outpouring are:- The Vietnam War, the Second World War, Alessandro Volta, the Wright brothers, Singapore 2015 World Stamp Exhibition, the Penny Black (see Blog 572), Taipei 2015 Philatelic Exhibition (wildlife of Taiwan - see Blog 576), Pope Benedict XVI, Mother Theresa and (presumably just to show Stamperija has a sense of humour and features on its products not only the Sacred - Pope and Mother Theresa - but also the Profane) Marilyn Monroe in a scantily clad and provocative state. The "date of issue" of these items is stated to have been 24 May 2015:- 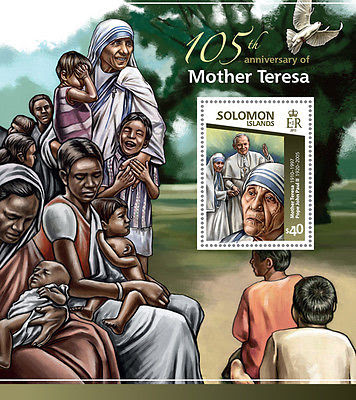 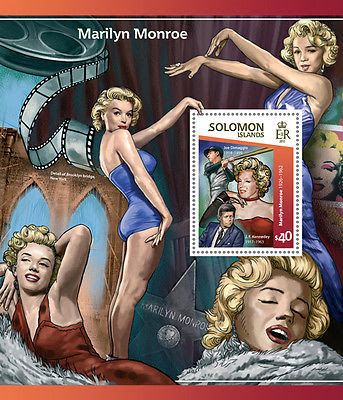 Posted by White Knight at 07:16 No comments:

In fact many of the postal administrations of West Africa have now put their philatelic reputations in the hands of Stamperija - Benin, Cape Verde, Guinea, Guinea-Bissau, Cote D'Ivoire, Niger, St. Thomas And Prince and Togo but this is the first Commonwealth territory in the region to fall into its hands. ISIS-like, Stamperija is gradually enlarging its (philatelic) territory and now The Commonwealth has five territories whose philatelic programmes have come under its influence (Mozambique, Maldives, Solomon Islands and Uganda being the other four). Stamperija also acts for Namibia but pleasingly has not so far had any effect on the stamps and number of stamps issued by the former South West Africa.
This is all bad news for the New York-based agency, IGPC, which has now lost 3 of its Commonwealth client territories - Maldives, Uganda and Mozambique - to the highly invasive Stamperija. Given that many of the stamps which IGPC produced in the name of Sierra Leone were considered by many to be excessive in nature and frequently were on subjects which had no relevance to Sierra Leone, the change of Sierra Leone's agent may have little impression on collectors who may feel that Sierra Leone is merely exchanging one philatelic agency for another of a similar type.
The big question, I suppose, is which impoverished postal administration will be the next to allow Stamperija to print its name on Stamperija's philatelic products?
Fiji Post has issued a very attractive and interesting set of 4 stamps (date of issue not yet known) on the subject of conservation of the endangered Fiji Flying Fox on Taveuni Island. All 4 stamps bear the logo of Nature Fiji:- 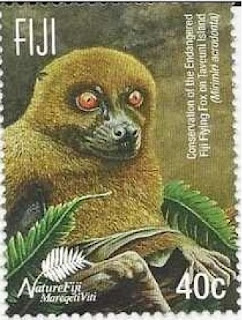 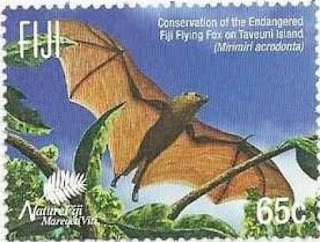 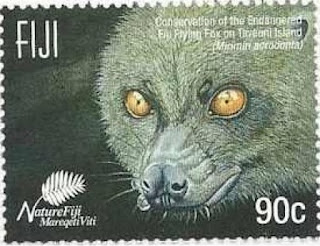 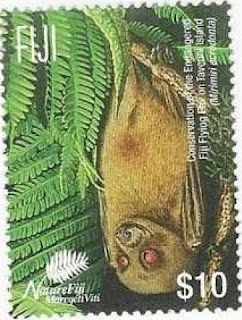 In Blog 576 I mentioned some items issued by Stamperija with the name of Solomon Islands printed on them which commemorated the Taipei 2015 philatelic exhibiton held from 24 to 28 April 2015. Further such items exist, said to have been released in May 2015, which also commemorate the Taipei 2015 exhibition and with the name of Mozambique inscribed on them. The items as usual take the form of a sheetlet of 4 different "stamps" and an accompanying miniature sheet. Each design depicts a Taiwan blue magpie:- 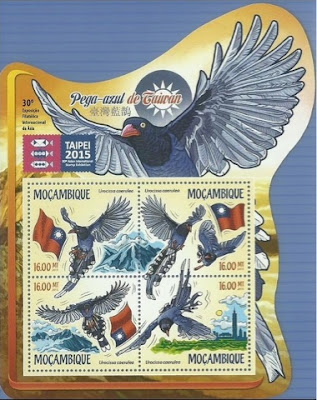 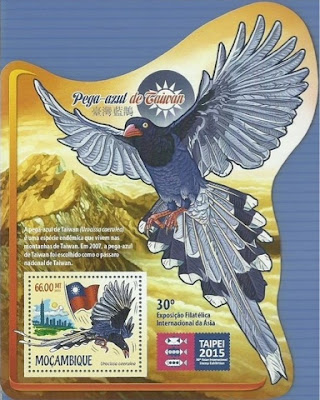 Intelligent AR has announced that "Post And Go" kiosk M002 which has been sited in Crewe and gave rise to the short-lived site-identifying inscription will be moved from Crewe on 27 May 2015 and, after an upgrade, will be moved to Mount Pleasant in London:-

Posted by White Knight at 01:32 No comments: 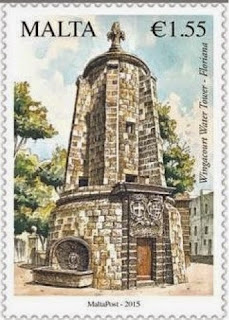 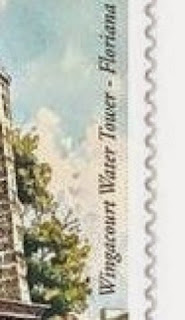 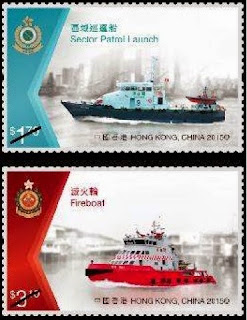 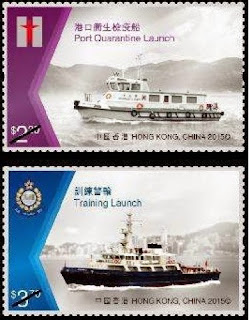 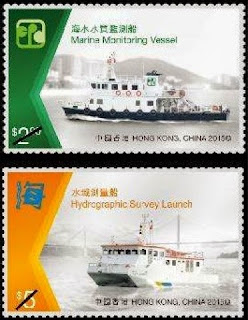 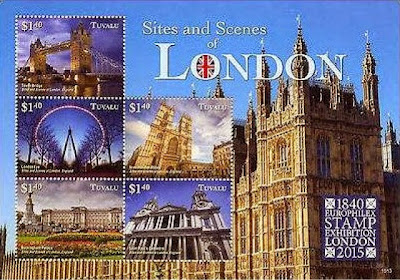 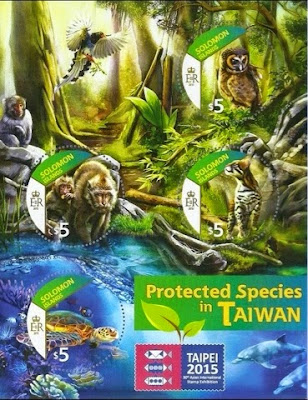 Posted by White Knight at 07:23 No comments: 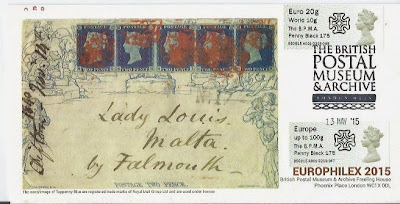 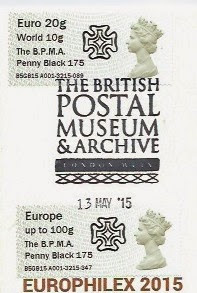 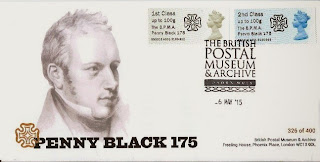 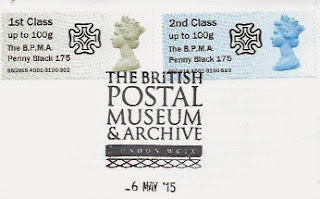 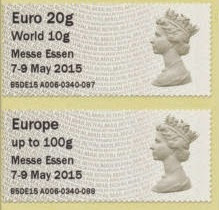 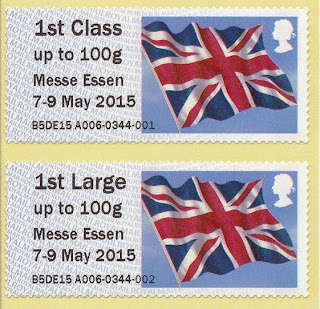 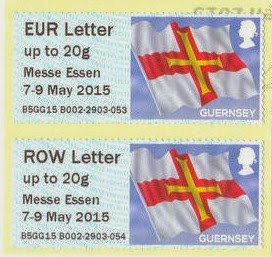 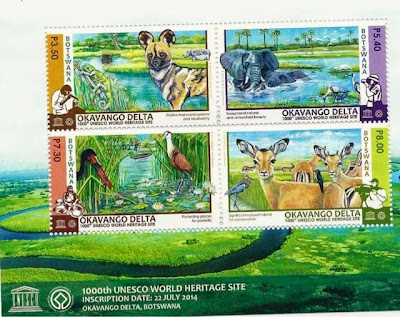 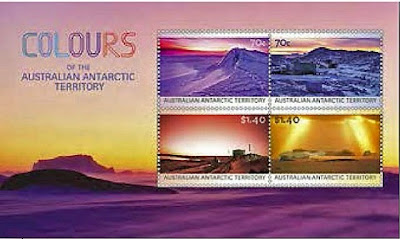 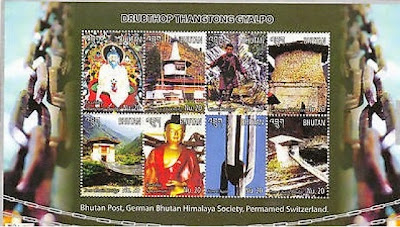 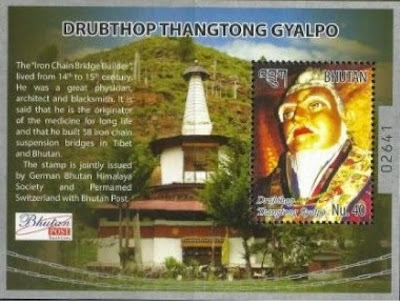 Posted by White Knight at 08:12 No comments: