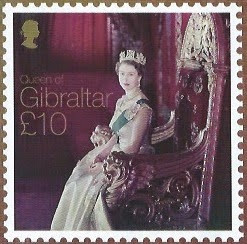 "This is a limited edition of 1,000 copies and we recommend you buy one as fast as possible as this issue is set to go down in history!"

A sentence such as the above which is published in the latest edition of The Bulletin, a publication of Gibraltar Stamps, is enough to strike fear into the hearts of any stamp collector.
The Gibraltar Post Office is to issue a £10 stamp to commemorate the achievement of Queen Elizabeth II in becoming the longest reigning English monarch when, on 9 September 2015, she passes the total of 63 years and 216 days which Queen Victoria spent on the throne. The stamp will be issued on 30 May 2015 and was designed by Stephen Perera and lithographed with additional thermography with 22ct gold by Lowe-Martin.
In addition to the stamp produced in ordinary sheets stamp collectors are invited to part with a grand total of £40 to buy an individually numbered miniature sheet containing 4 examples of the £10 stamp issued in a special pack (a limited edition of 1000). The collector is exhorted to hand over their money to the Gibraltar Post Office in the sentence quoted at the head of this piece. Sadly, I think I shall turn down Gibraltar's Stamps offer as the face value is preposterously excessive.
Meanwhile, Royal Mail remains remarkably coy about the issue it intends to release on 6 October 2015 to commemorate the Queen's reign but with all the greedy little islands and dependent territories now starting to announce their overinflated issues it will be interesting to see if Royal Mail will come up with something to trump them all. Or perhaps Royal Mail could give us something modest and respectful to commemorate The Queen's record reign - well, anything is possible. Perhaps Royal Mail will take the opportunity to feature Prince George's first ever appearance on a British stamp in a portrait with his great-grandmother - time will tell. 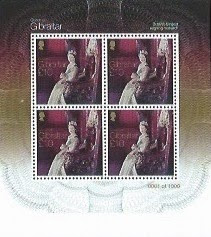 The Bermuda Post Office issued a set of 5 stamps on 16 April 2015 to commemorate the 50th anniversary of the Bermuda Regiment;- 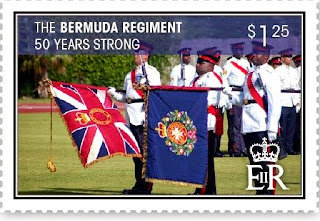 Pakistan Post issued a stamp on 4 May 2015 on the subject of Pakistan's first 100MW solar plant. The stamp was designed by Liaquat Ali and lithographed by Pakistan Security Printing Corporation of Karachi:- 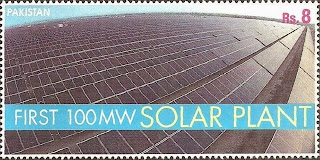