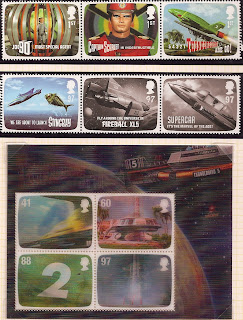 Modern stamp catalogues are very annoying - there seems to be no logic to them - the way that editors continue to fully list hundreds of "stamps" which frequently never see a postal counter in the country whose name they are inscribed with and which feature designs and subjects with no relevance to the country ostensibly "issuing" them. The editor of Gibbons catalogues questions his right to list or omit such issues in his catalogue - well, he is the editor, so I guess he has got a perfect right to choose what is and what is not listed in the book that he is editing. Perhaps there is a legal element to it, after all the Gibbons Catalogue is a commercially influential piece of work; if your stamps are not listed in it then most collectors are unlikely to buy them; perhaps the editor is fearful that one or two of the more brash and aggressive philatelic agencies (and we know who they are) would take legal action against him on the grounds that the catalogue was causing a restriction of trade. The result is that Gibbons now lists stamps that are not true postage stamps - that is - they are not produced with the purpose of providing a receipt for the pre-payment of postage. I like to call them "collectable labels with postal validity".  I have long excluded from my Commonwealth collection products of philatelic agents which have been produced persistently for countries of which the subject matter has no relevance to the countries involved. Over the years, I have been fortunate enough to visit quite a large number of these territories and have found universally that such items are not sold at ordinary postal counters for use on regular mail - they are not freely available to members of the public for postal usage. Such items do not qualify to be listed in a catalogue of postage stamps. In my opinion it is counter-productive to list them in stamp catalogues as it is no more valid for them to occupy places in these publications than it is for revenue stamps or hunting stamps to be there. A catalogue of postage stamps should do precisely what it says on the cover - it catalogues postage stamps.
Here, within this blog, I hope to provide my own catalogue of Commonwealth issues for 2011 by providing a list of stamp issues issued during the year which a reasonable observer (in this case, myself!) would describe as a postage stamp and which seems to have been issued for genuine postal usage (although other subsidiary reasons for issue such as commemoration of important anniversaries, events, people, culture, particularly of national interest - and international commemorations may have relevance to some countries). I will give all listed issues a number and if an "issue" does not appear in my list then it will mean that I do not view it as a genuine postage stamp according to my own definition - it may be a collectable with postal validity but not, in my opinion, an item worthy of inclusion in a catalogue of postage stamps.
I wonder how 2011 will turn out eventually. Will the greed for philatelic revenue that has gripped so many postal administrations and philatelic agencies in recent years finally kill the golden goose and terminally turn collectors of postage stamps away from new issue collecting? Will the growing chaos involved in obtaining new issues from some countries help to put the boot in too? In the last two or three months of 2010 two major British dealers of new issues called it a day and sought refuge in well-earned (semi-)retirements and they will be hard to replace for their sheer reliability and enthusiasm for obtaining items for their customers. And what of possible new countries to collect, Southern Sudan, for instance? 2011 should be a very interesting year, not so much for the stamps that will be issued as much as for what may happen to philately itself.
Posted by White Knight at 07:36 No comments: