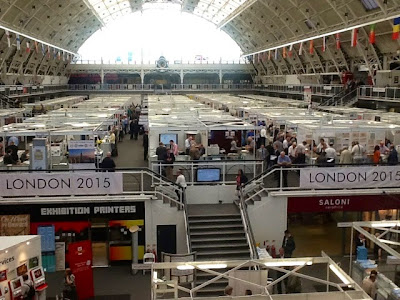 Despite my extreme dislike of London I packed my bag, put collar and lead on the dog and together we set out on the train journey to spend a couple of nights in the big city so that I could pay a visit or two to the Europhilex Stamp Exhibition 2015 at the Design Centre in Islington.
After the dog had had a good hour or so walking around Regents Park and was settled in our hotel for a pleasant snooze, I set off for the exhibition and arrived there about 4.15PM. It was late in the day and if it had been busy there earlier in the day, an air of late afternoon calm had settled on the place. I guess the entrance price of £10 was not terribly attractive to visitors who would be allowed to enter for free in the subsequent days of the show.
One advantage of arriving in mid to late afternoon was that there were no queues for anything, particularly at the Royal Mail stand with its attached array of Post And Go kiosks. I was able to buy the items I wanted from the Royal Mail stand with less bother than I have ever experienced at any stamp exhibition I have visited in the past. I bought a pack of the new heraldic beast Post And Go labels and requested a penny black miniature sheet overprinted Europhilex pack (see Blog 557). The counter assistant had clearly misunderstood my request as he handed over 3 of the packs - this surprised me as publicity had suggested that collectors (and dealers) would be allowed to buy only one of these packs per day - I did not really want three but, in the expectation that they may be relatively rare in the future, I accepted the 3 packs offered to me and paid up.
I then paid my attention to the Post And Go kiosks. Their usage was explained to me by the charming young ladies present there - like everyone I met at the exhibition they were extremely helpful, friendly and courteous. While I was at the Post And Go area, only one other buyer made use of the machines. Apparently most of the buyers had been using them earlier in the day but I was surprised that they were receiving such little attention and I could not help wondering if this suggested that there had been a slump in enthusiasm for Post And Go products. I bought labels from all 6 kiosks in use there - starting with the machine which supplied the new Gibraltar labels (depicted below). 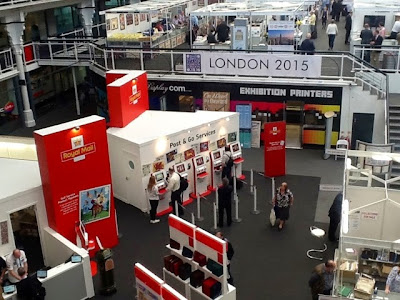 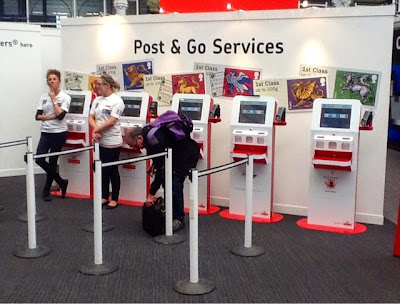 For collectors of the theme of flags on stamps there was a veritable surfeit of these exhibition souvenirs for them to add to their collection even if the only items among them to have postal validity in London were the Union Jack stamps:- 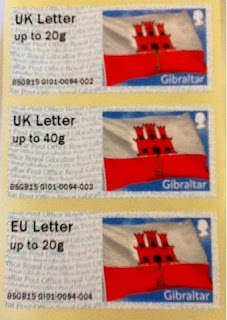 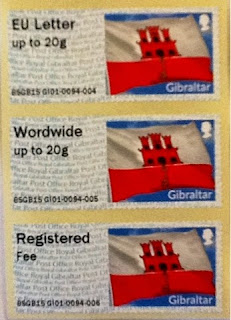 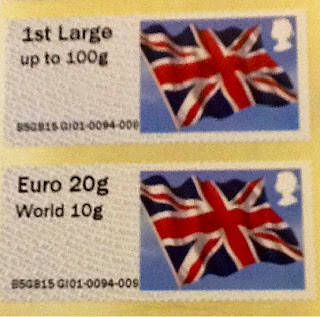 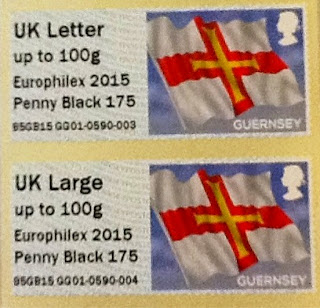 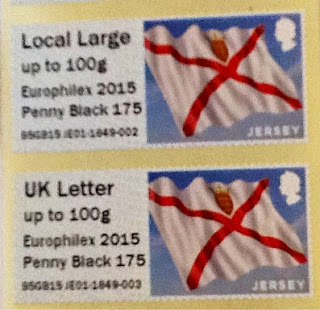 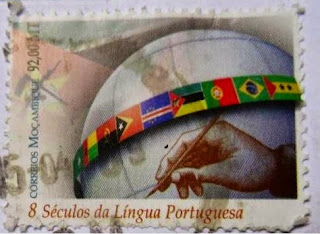 I shall give further details of the Europhilex exhibition over the next couple of days.
The Mozambique Post Office has issued a single stamp to commemorate the 800th anniversary of the Portuguese language. The stamp depicted above was recently offered for sale on cover on an Internet auction site and confirms the issue of this stamp about which I speculated in Blog 519. I presume, as stated in Blog 519, that the date of issue was 9 October 2014 and the confirmation of its existence suggests that the other Lusophone territories did indeed participate in this omnibus issue - I shall be particularly interested to see if a stamp from Timor Leste in this same series also appears on mail or on the philatelic market.
Interestingly, the Stamperija stand at Europhilex had no information about the above Mozambique stamp and did not know that it even existed. Likewise the polite man at the stand could tell me nothing about the Maldives dolphin and turtle tourist postcard stamps which I have mentioned several times in the past (Blog 519).He told me that Stamperija did not really deal with definitive stamps. I guess that tells us a lot about the relationship between Stamperija and its client postal administrations.