829. Interesting Mail From The Isle Of Man.

It's hard to believe that the numerous stamps which are being released by various post offices, philatelic bureaux and philatelic agencies are ever actually intended to be used as postage stamps when even philatelic bureaux do not use their own stamps on mail they send out. And when they start using mailers from outside their own territory, eyebrows really need to be raised.

Recently I received some interesting mail from the Isle Of Man Post Office Philatelic Bureau in the form of a cover with an imprinted version of the £1.69p value of the "Art of Roger Dean" set issued by the Isle Of Man P.O. on 19 August 2016. The cover is properly postmarked with a double-ringed cancellation "ISLE OF MAN POST OFFICE" but the date and accompanying slogan are impossible to read because of the large area of black incorporated in the stamp's design. The readable part of the slogan is "PLEASE INCLUDE THE/POSTC...(I presume that this is POSTCODE)/NOT......./AD......./W......". The only readable part of the date is "16".
I can not understand why philatelic promotional material is sent out from the Philatelic Bureau itself in a cover which does not have a real postage stamp attached to it but instead the expense of producing special envelopes with facsimiles of a real stamp are produced and used. Imagine how delighted a stamp collector would be to receive a real postage stamp, properly franked, on a cover which has really travelled through the postal system from a philatelic bureau that hopes to sell the collector an unused complete set of the stamps.
Actually, of course, the cover I received is very interesting and tells us a lot about the ridiculously excessive number of stamps that are being released by the Isle Of Man Post Office and other postal administrations and philatelic agencies. If even the Isle Of Man Philatelic Bureau does not use its own postage stamps then is there any real need for them at all other than as a collectable which is the point where stamps cease to be postage stamps, which collectors add to their stamp collections, and become expensive stickers which sticker collectors add to their collections? 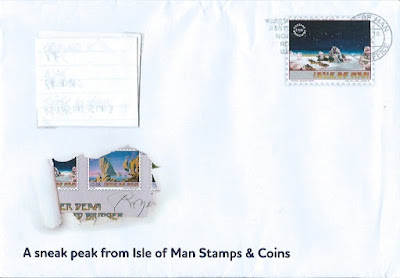 The Isle Of Man Post Office has, of course, been in dire financial straits for some time, even having to move out of its flagship post offices in Douglas and Ramsey to set up counters in nearby privately-owned supermarkets. This may be the reason behind another cover from the Isle Of Man Philatelic Bureau containing philatelic promotional material which I received a couple of days before the cover above and which originated, not in the Isle of Man, but in Winchester in England.
The cover has the return address "PO Box 693, Winchester, SO23 3PP" and I presume that the Isle Of Man philatelic service found it cheaper to use an England-based address from which to send its communications within The United Kingdom than it was to employ people living in The Isle Of Man to carry out the work. Interesting. The letter entered the mail system, as judged by the postage paid indicia at the top right of the cover, through the whistl postal service.
"whistl" started off delivering a postal service in The United Kingdom as part of the Dutch postal service TNTNV which was an express, mail delivery and logistics service with headquarters at Hoofddorp in The Netherlands. In August 2011 TNTNV was split into an express company and a mail   company.
The new company PostNL subsequently owned TNT Post UK which was the biggest postal service operating in The United Kingdom after Royal Mail. The Dutch TNT Express company retained the rights to use the TNT brand and it was agreed that the mail services would be rebranded by 2015. In consequence TNT Post UK was renamed "whistl" towards the end of 2014. The chosen new name was explained by the statement that "whistl suggests the idea of happy people as the word is a natural reaction when people are happily going to work". In 2014 the rebranded whistl was responsible for less than 0.4% of the addressed mail market.
This is the first time that I recall receiving mail from a non-British philatelic bureau which has been posted in Britain and it certainly makes one wonder about the state of The Isle Of Man Post Office if it can not even carry its own philatelic promotional literature. 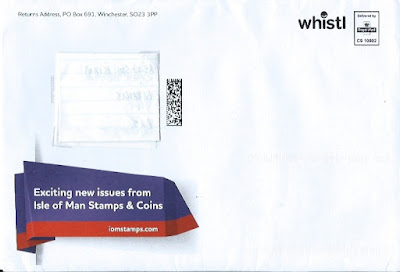 The philatelic literature revealed that the Isle Of Man Post Office is to release even more philatelic issues in the near future. The first item is a miniature sheet which commemorates the round the world flight of Solar Impulse which was powered by solar energy only. The item, costing £3, commemorates an achievement in which there was no Manx involvement at all that I can find - it was mainly a Swiss achievement (Switzerland's postal service has recently issued a stamp to commemorate Solar Impulse's flight)  - so this looks like yet another catchpenny issue with no relevance to The Isle Of Man.
Rating:- 0.

Isle Of Man Post Office will then release 6 stamps, total face value £6.40p, on 20 October 2016 as its Christmas issue. The stamps, on the subject of Christmas Pantomimes, were designed from art by Christopher Biggins, a British actor known for playing pantomime dames and although the Gaiety Theatre in Douglas this year will be putting on "Robin Hood and His Merry Men" from 26 November 2016 to 8 January 2017 (is that Robin Hood's hat on the £1.86p value?) I really can't get excited about these stamps and, like the Solar Impulse sheet, I shall not be adding them to my collection. Rating:- *. 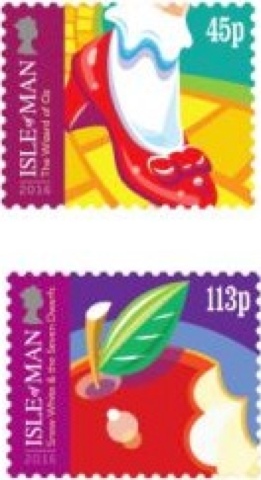 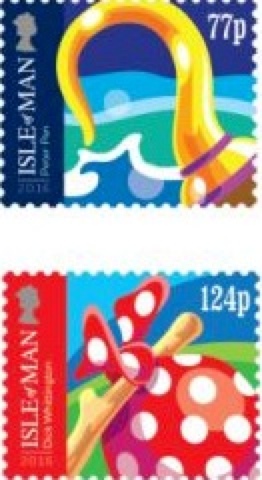 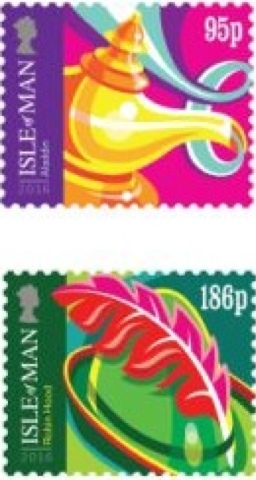