Guernsey Post has published indications of its new issue programme for 2017:-

1. 15 February - Maps - 6 stamps and 1 miniature sheet (total face value £7.24p)
2. May - to be announced
3. July - to be announced - probably will commemorate the Platinum (70th) Wedding anniversary of Queen Elizabeth II and The Duke Of Edinburgh
4. 8 November - Christmas - 7 stamps

There seems to be little new in the above items. Guernsey Post continues to plod along with its tiresome annual lunar new year products - I hope sales in China make it worthwhile - and the never-ending Endangered wildlife products. It also continues to insist on issuing 7 Christmas stamps each with the inscriptions of both Guernsey and Alderney. We shall see if the as yet unannounced issues add a bit of interest to the Guernsey Post 2017 stamp programme.

The An Post "Cycling in Ireland" issue (see Blog 796) included a miniature sheet and I now include an improved  illustration of the attractive item below:- 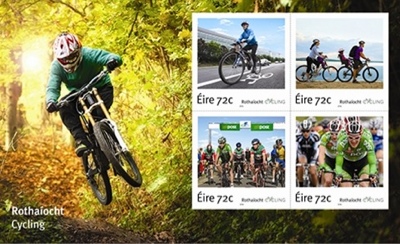 India Post issued 2 new My Post stamps on 16 September 2016 - the first commemorates the 25th anniversary of Mphasis, an IT services company based in Bengaluru, and the second commemorates the Centenary of Karur Vysya Bank. The items are both sold in sheets each costing Rs500. Rating:- *.

Back to Guernsey Post - the Alderney "Battle of Hastings" miniature sheet was sold as imperforate "press sheets" of 6 sheets in a "limited edition" of 300 all of which were sold within 2 weeks of the date of issue. The items were sold for £26 each meaning that Guernsey Post sold 300 pieces of sticky paper, with no chance of them ever being used to pay for the carriage of mail, for a grand total of £7800. Good news, then, for Guernsey Post but what I want to know is - what does one do with these large unwieldy things when when one actally has got one? 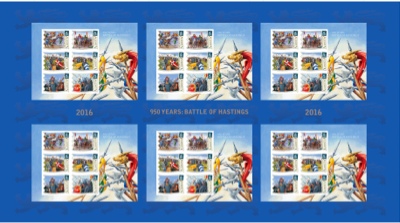