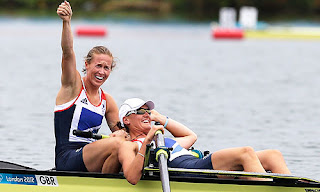 The first issue of a gold medal winner miniature sheet by Royal Mail will take place on Thursday 2 August after the victory of rowers Heather Stanning and Helen Glover in the women's coxless pairs event. They became the first ever female rowers to win a gold medal for Britain as well as the first British athletes to win a gold medal at the London Olympic Games this year. As previously announced, the self-adhesive miniature sheet will consist of 6 x 1st class (60p) stamps costing a total of £3.60 and will be on sale at more than 500 post offices throughout Britain from midday after the involvement of 6 different regional printers. The race was won by the two women in grand style with them effectively leading from the beginning of the race. The Australian rowers won silver and the New Zealand rowers won bronze. After 4 days of a failure to win a gold medal, Royal Mail's prospects of making a large amount of financial profit from the success of British athletes were looking a little bleak but Royal Mail managers will now doubtlessly be rubbing their hands together at the prospect of further British victories and further Royal Mail profits. Australia Post too has had little opportunity to produce its $6 gold medal winner sheetlets with only 1 Australian victory in the first 4 days of the Games. The stamp and booklet are shown below. 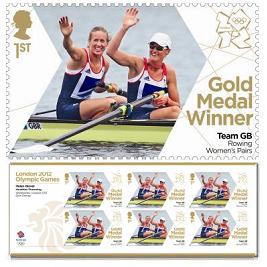 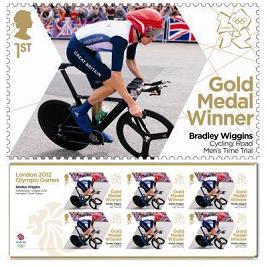