Jamaica: So Much To Celebrate But Where Are The Stamps? 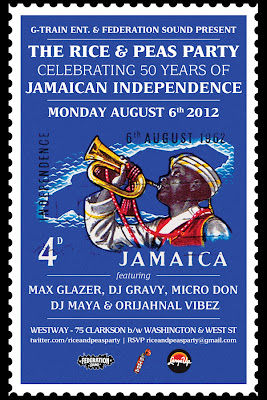 On 6 August 2012, Jamaica celebrated its 50th anniversary of independence. This year, the Queen of Jamaica, Elizabeth II, celebrated the 60th anniversary of her accession to the throne. On 9 August 2012, a Jamaican runner, Usain Bolt, became the first man to win the 100m and 200m sprint races in 2 consecutive Olympic Games and Jamaican runners took the gold, silver and bronze medal places in the 200m race at the London Olympics. So much for Jamaica to celebrate. So, where are the commemorative stamps? So far there has been no news of any stamp issue to mark the country's significant 50th birthday or the significant anniversary of its head of state. Perhaps it's a little too soon for it to announce a philatelic commemoration of the exciting achievements of its athletes. But what is happening at the Jamaican Post Office and with CASCO, its philatelic agents? Not a lot it appears. It may be that the new Jamaican prime minister wants the country to become a republic and that the non-appearance of a royal diamond jubilee stamp is explained by the political situation but surely the country could have issued a set of stamps to coincide with its 50th anniversary. The only philatelic item I could find on the internet about this event is shown above which is actually a poster for a party which was held to commemorate Jamaica's golden jubilee and which cleverly uses the 4d value of the 1962 independence set.
And so, back to the Olympics. Australia will issue its 7th gold medallist stamp during the next 48 hours to commemorate the victory of Mathew Belcher and Malcolm Page in the Sailing men's 470 event. The stamp design is awaited. Meanwhile Australia Post has altered its website so that it is once more possible to buy sheetlets of 10 medallists stamps at $6 rather having to buy 2 sheetlets at $12. Presumably, now that Australia Post has a few more stamps to issue, enough profit can be made out of selling the items in smaller amounts. Some of the designs are illustrated:- 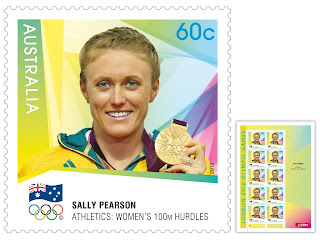 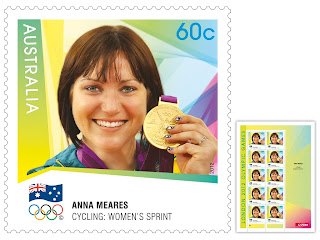 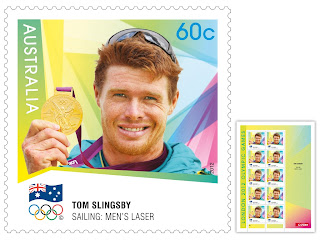 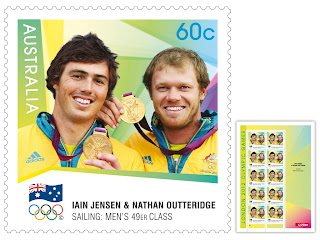