Rather reflecting the 2 national teams themselves, the Australia Post gold medallist stamps are far more pedestrian in design than the gold medal winners stamps of Royal Mail. The Australian stamps merely show rather humdrum close-ups of the medallists' faces while the Royal Mail stamps frequently depict action shots or if the designs are rather posed than at least the frame of the stamp adds a drama to the design. Even Australia Post's preparation of the design takes much longer than does Royal Mail. The 2 latest Australian medal winners stamps have finally appeared on the Australia Post website and are in the same format as the previous 3 designs:-

A 6th medallist sheet will be required to commemorate the victory of the Australian team in the men's kayak 4 1000m event on Thursday 9 August. The crew comprised Tate Smith, David Smith, Murray Stewart and Jacob Clear. As usual, the item will be produced in the next 48 hours and the design is awaited but given that it will be in the same format as previous issues, I wonder how many people will want to buy 20 stamps at a cost of $12 when only one 60c stamp is really required for a collection especially when the designs are so unexciting.
Royal Mail will be issuing more Gold medallist stamps tomorrow after the victories of 3 women in very different events. Charlotte Dujardin became the first Briton ever to win gold in the Equestrian individual dressage event while Nicola Adams became the first ever woman to win a boxing gold medal in the flyweight competition. Jade Jones won the Taekwondo 57kg event. 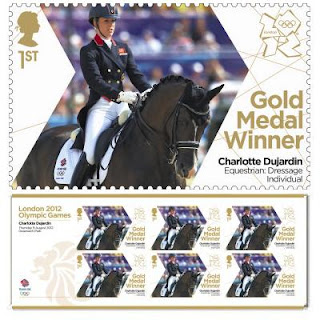 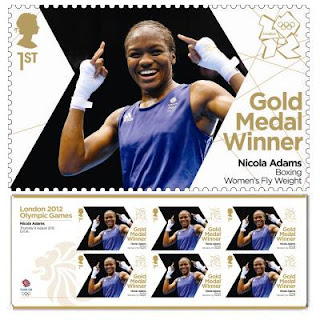 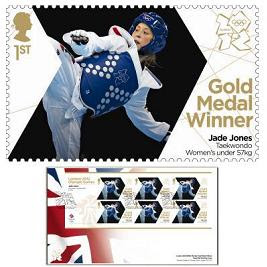 Meanwhile, I depict the designs of the pair of stamps issued by Ireland on 19 July 2012 to commemorate the 2012 Olympic Games. They were designed by Red Dog Design. They are certainly colourful even if the design of the 82c is rather difficult to interpret.