Below, I depict some of the designs of the 88 stamps which were issued in 11 sheetlets each of 8 stamps and 2 labels to commemorate the 70th anniversary of Operation Pedestal (see blog of 14 August 2012). A leaflet produced by Malta Post informs us that the event is remembered by the Maltese people as Il-Convoy ta' Santa Marija and that the convoy represented the British authorities' final effort to save Malta from the Axis attackers who had caused the island's fuel and food supplies to reach critically low levels. The convoy was made up of 13 freighters and 1 tanker which were escorted by 4 aircraft carriers, 2 battleships, 7 cruisers, 33 destroyers and other support vessels. The convoy passed through the Straits of Gibraltar in the early hours of 10 August 1942 and the Axis forces - Germans and Italians - attacked it and sank the aircraft carrier HMS Eagle. The battle lasted 3 days with 9 ships being sunk and the Royal Navy lost 1 carrier, 2 cruisers and 3 destroyers. Other ships were damaged. 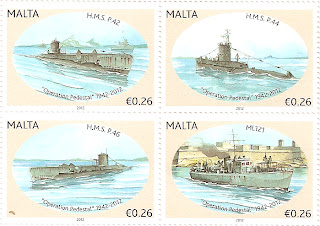 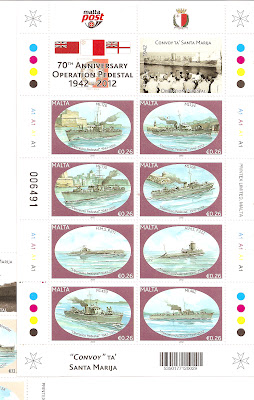 The tanker Ohio survived a torpedo hit, 2 bombs crashing on its deck and engine failures and eventually arrived at Malta. The date of the convoy's arrival, 15 August, the feast of Our Lady, is celebrated annually in Malta. The date of issue of the stamps was 10 August 2012. They were designed by Cedric Galea Pirotta and lithographed by Printex Ltd. 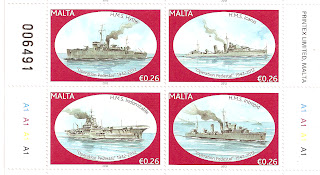 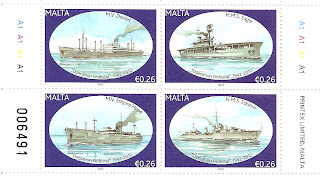 Arriving with my convoy set was the miniature sheet which Malta issued to commemorate the London Olympic Games (see blog of 14 August 2012) which was issued on 27 July 2012. One of the stamps that make up the sheet depicts the monstrous emblem of the Games, something named "Wenlock", which another leaflet from Malta Post tells me, was chosen from 100 designs submitted by various design agencies (were there really 99 worse designs? have all the designers in the world gone mad?) Apparently the sinister and troubling design was chosen because of "its appeal to young people" (really?) and because it would " encourage them to take up sport as a hobby or career" (though I would have thought it was more likely to give them nightmares). Almost everything about the London Olympic Games was superlative but the choice of this ludicrous invention as the Games' mascot which has appeared on a number of stamp issues was a definite misjudgment. 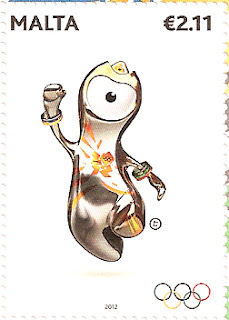 Finally I illustrate some recent stamps from Jersey which show that Jersey can still issue collectable and attractive items despite the appallingly expensive Diamond Jubilee issues. On 14 August 2012, 6 stamps and 2 miniature sheets were issued to depict locally endangered species of birds. They are beautifully illustrated by Nick Parlett and lithographed by Cartor. 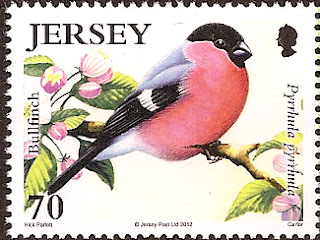 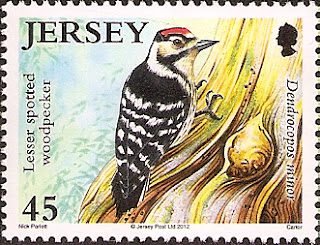 An equally attractive set of 6 stamps which depicted local trees to commemorate the 75th anniversary of an organisation called "Jersey Trees For Life" which encourages preservation and planting of trees in Jersey, was issued on 3 July 2012. The designs were painted by Michael Pollard and lithographed by Enschede. And this time, there are no greedy, silly £10 values for collectors to deal with. 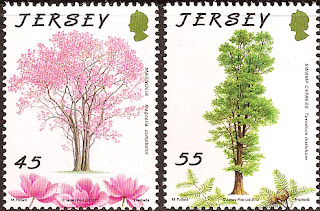