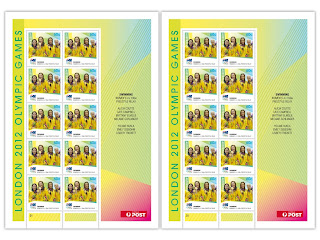 Although Australia Post has only had to produce 1 Olympics gold medal stamp so far, it seems to have found a way of extracting money from collectors to make up for the shortfall of Olympic stamp income. If you look up the gold medallist stamp on the Australia Post website, it is now sold as 2 sheetlets at a cost of $12, whether these are 2 separate sheets or whether they are printed together in that format is not clear from the illustration. So, if you want this particular 60c stamp from Australia Post you must pay them 20 times as much. Australia's athletes have failed and Australia Post intends that stamp collectors should compensate the organisation for the money it would have made had the athletes been more successful. 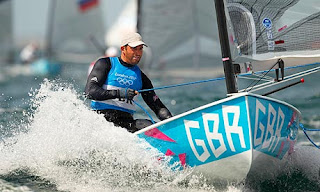 Meanwhile British gold medal success continues with the victory of Ben Ainslie in the Sailing Finn class. This is the fourth consecutive Olympic Games in which he has won a gold medal and so he richly deserves to be featured on a British postage stamp which will be issued on Monday 6 August:- 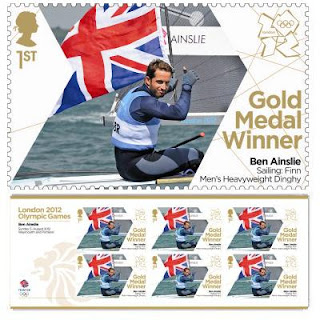 Equally worthy of commemoration is Andy Murray who has become the Olympic champion in the Tennis men's singles after his straight sets victory over Roger Federer at Wimbledon. Andy Murray became the first British player to win the men's singles since 1908. 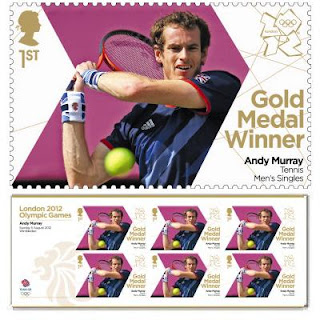