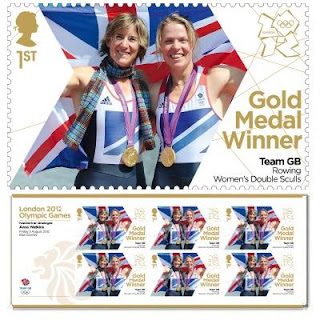 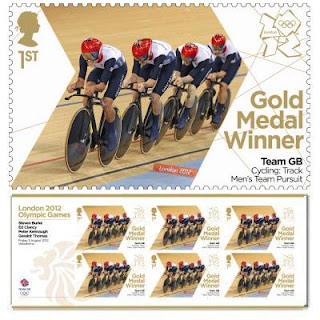 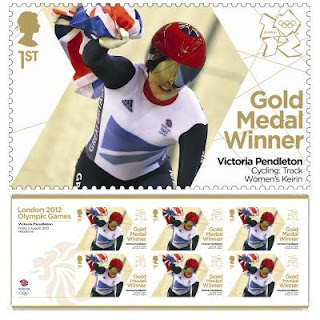 As detailed in the previous blog, 3 new miniature sheets, numbers GMW 03-05, were issued on 3 August 2012. On my second visit to Birmingham Head Post Office in Victoria Square, I found that unlike yesterday, the counter assistant had a pair of scissors and was quite happy to sell individual stamps rather than the collector having to buy the whole miniature sheet. However, the whole process of cutting the stamps from the miniature sheets was relatively laborious and time-consuming and inexact since, when I returned home, I found that the assistant had cut through the Queen's head and value at the left of one of the stamps. I mused that post office counter assistants have not had to take a pair of scissors to extract a stamp from its sheet since 1847 to 1854, at the time of the 3 Queen Victoria embossed stamps. I guess they are  a little out of practice. Interestingly, the counter had sold out of yesterday's Bradley Wiggins stamps (no. GMW 02) but still had a supply of the Glover and Stanning stamp (GMW 01). Today the counter assistant placed my purchases in a special Royal Mail "Gold Medal Winners Miniature Sheet" envelope and this might be of interest to postal stationery collectors. 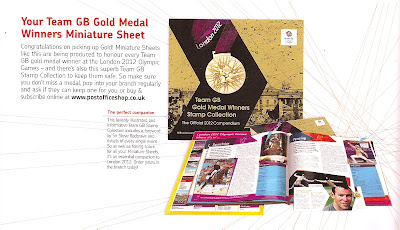 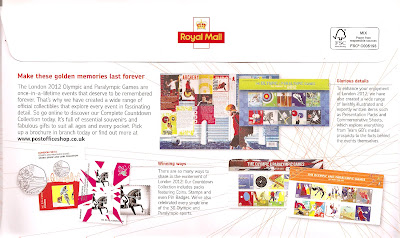 Currently the games are proving to be disastrous for Australia Post since they have only had the opportunity to issue one "gold medallist" stamp due to the failure of the Australian team to win more than 1 gold medal and so the Commonwealth postal administration gold medal table now reads:-
O dear! In the real medals chart, Great Britain is now third while Australia languishes at 19th with New Zealand and South Africa both having won more gold medals than Australia. I have not heard any news that these 2 latter countries plan to issue "gold medallist" stamps which is just as well since New Zealand Post and the South African Post Office would both be placed higher in the above table than Australia, at least for the present.

Stamperija have produced yet more "stamps" with the name of Mozambique inscribed on them. I find the items so extraordinary that I can not resist showing one or two of them. There is a set of 6 stamps issued as a sheetlet plus 1 miniature sheet, which commemorates the birth bicentenary of the English writer, Charles Dickens. The designs, at least in part, seem to feature scenes from television or cinematic adaptations of Dickens' novels - I think the middle design on the lower row shows a very young Daniel Ratcliffe as David Copperfield in a BBC adaptation of the novel of that name and the stamp to its right looks suspiciously like a scene from a film adaptation of "A Christmas Carol" with Patrick Stewart as Scrooge. The top right design looks rather like a scene from the Oscar award-winning film of the musical "Oliver" adapted from the novel, "Oliver Twist".  I wonder if the producers of these items received permission to reproduce scenes from these movies and television programmes. 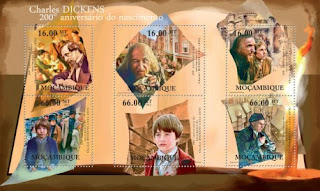 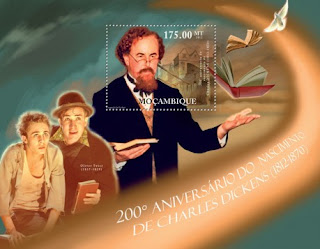 The other sets (all sheetlets of 6 plus 1 miniature sheet) in this issue are:- Commemoration of US boxer, Joe Louis:- 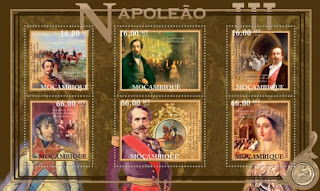 The "date of issue" is quoted as being 28 February 2012 and in all this represents an "issue" of 60 stamps and 10 miniature sheets which again appear to have no direct relevance in subject matter or design content to Mozambique. So far then, Mozambique has theoretically allowed the production of 180 stamps and 30 miniature sheets which bear its name and which are valid for postage in 2012 (all on the 28 February) and extraordinarily, none of them feature a subject of direct relevance to the country. Who does buy these items?
Posted by White Knight at 11:57