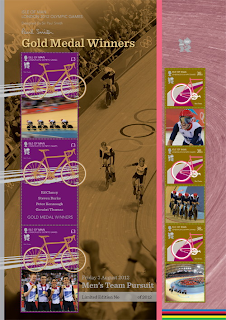 Isle Of Man Post Office has announced that it will issue a limited edition miniature sheet sometime in September 2012 to commemorate the gold medal victory of the Great Britain in the Cycling men's team pursuit event. One of the members of the team was Peter Kennaugh, a Manxman. Only 2012 of the sheets will be released (that is a seriously small number) and the price will be £10.
Despite having something of an aversion to the issues of the philatelic agency, Philatelic Collector Inc., which produces stuff with Tonga's and Cook Islands' and their subsidiary postal entities' names printed on them, I can not help but admit that I quite like their "limited edition" Olympic Games items which consist of gutter pairs of the basic commemoratives with the autograph of the stamps' designer inscribed on the gutter alongside the printer's imprint. The cost is $35 which is not bank-breaking and I think that although the items are philatelic confections they are rather good fun and something a little bit different that can be added at a reasonable cost to make a collection that little bit more interesting. 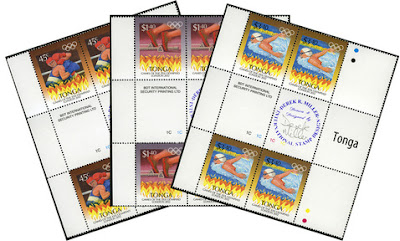 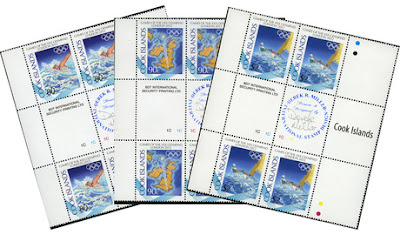 One Commonwealth country which I am sure will issue an Olympic gold medal winner stamp in the fullness of time is Grenada which received its first ever Olympic Medal when Kirani James won a gold, no less, in the Athletics men's 400 metres event. That will be one issue from Grenada that will certainly be worthwhile and well worth obtaining along with the Royal Mail and Australia Post medal winner stamps.
Australia will issue its 5th gold medallist stamp over the next 48 hours, this time to commemorate the victory of Nathan Outteridge and Ian Jensen in the Sailing men's 49er class event. The design is awaited.
The Commonwealth postal administrations' gold medallist stamp table now reads:-