Twenty stamps and 5 miniature sheets comprise the latest new issue from Uganda which is dedicated to the subject of "celebrities" (all foreign and unlikely to ever have visited Uganda) which was released on 25 July 2012.  Five subjects are depicted as part of the overall theme, each sub-set consisting of 4 stamps and a miniature sheet. The subjects are:- Yuri Gargarin, first man in space:- 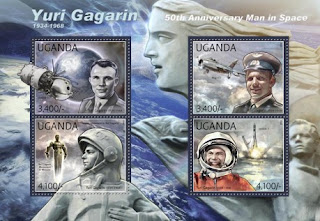 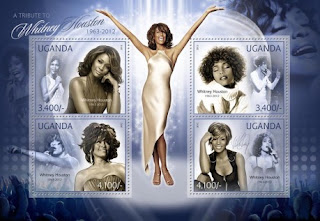 Elvis Presley, an American entertainer who died in 1977:- 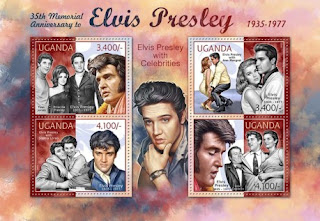 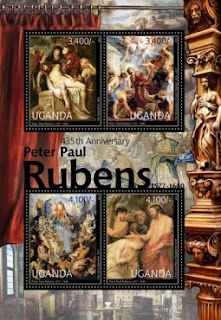 and Russian chess player, Garry Kasparov, with the computer "Big Blue" which had a chess match with him in 1977:- 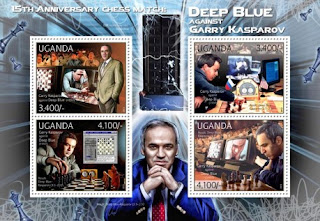 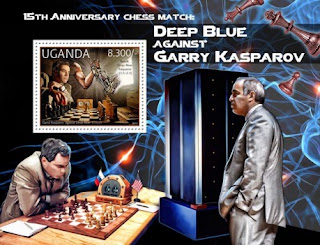 These items, as you can tell from the style of design, were prepared by the Stamperija stamp agency of Lithuania and follow a previous issue produced by them which was issued on 30 March 2012 which consisted of 40 stamps and 10 miniature sheets on the subject of "fauna of Africa". As a philatelic agency which operates from New York has also produced stamps for Uganda during 2012, I estimate that 108 stamps and 23 miniature sheets have been issued so far this year on Uganda's behalf. 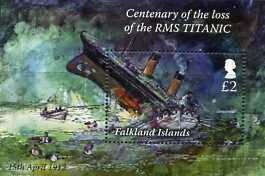 Meanwhile, issues to commemorate the centenary of the sinking of The Titanic continue with the above miniature sheet and a set of 4 stamps from The Falkland Islands (why? - the ship sank in the north Atlantic Ocean, not the south where the Falkland Islands are located). Tuvalu, which is even further away - in the south Pacific area - has also had 3 stamps and a miniature sheet produced for it by the New York-based agency:- 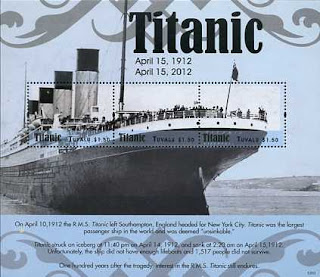 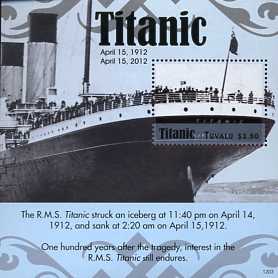 One territory at least has issued a sea-linked set of stamps with relevance to itself - South Georgia and The South Sandwich Islands - which released a set of 4 stamps on 31 August 2012 which depicts the Blue Whale:- 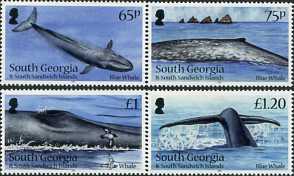 It seems to me that this final set is just about the only one that I shall be adding to my collection because its the only one which has any meaning to the country whose name appears on the stamps.