Having visited post offices in 2 different parts of England - Birmingham and Sheffield - it is possible to say that there are discernible differences in the British gold medallist stamps printed overnight by at least 2 of the printers involved - Solihull which printed the Birmingham stamps and Preston from where all but the last 3 sold in Sheffield originated. In the illustrations below, the upper stamps are printed by Preston and the lower by Solihull and marked differences in the shade of all 4 stamps - the Preston-printed stamps are more strongly coloured with the Solihull stamps looking rather pale and anaemic in comparison. This poses a problem for completist stamp collectors who may feel more than ever that they need to buy all 6 different printings of all 29 miniature sheets (though Preston did not print the last 3 stamps, GMW 27 - 29). The cost of doing so would amount to more than £600. 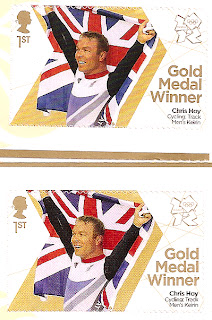 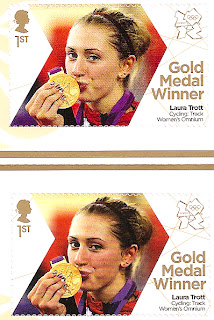 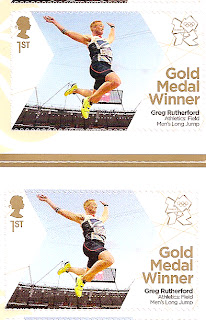 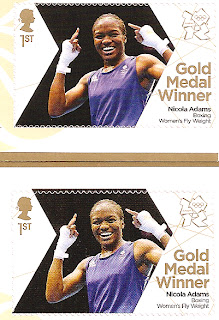 Meanwhile news from Tuvalu that a new definitive set of 12 stamps featuring fish was issued on 15 July 2012. 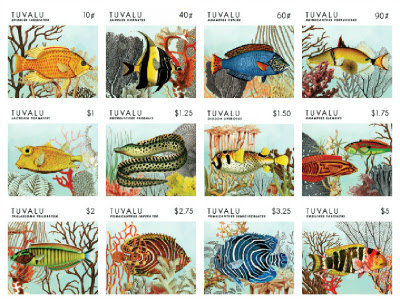 Also released were 2 sheetlets featuring "dogs of the world", issued on 15 July 2012, and "cats of the world" which was issued on 7 August 2012. An issue featuring beetles is due for release in September along with a set dedicated to the artist, Raphael.

Five stamps and 2 miniature sheets to commemorate the Diamond Jubilee of Queen Elizabeth II are to be issued by St. Kitts

and a sheetlet of 4 identical stamps and a miniature sheet are also to be issued by Turks and Caicos Islands to commemorate the event:- 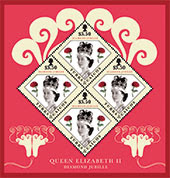 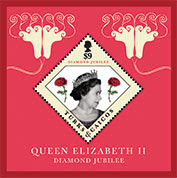 A sheetlet of 4 stamps which depict various ferns of the Caribbean area is to be issued by Montserrat:- 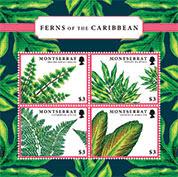 Finally, Stamperija has produced another 10 sets of stamps with Mozambique's name inscribed on them, this time on the theme of "Extinct or near extinct fauna". The "date of issue" is given as 30 April 2012 and the stamps take the form of sheetlets of 4 to 8 different stamps plus a miniature sheet of 1 stamp. The subjects depicted are:- butterflies, extinct animals of Asia, parrots:- 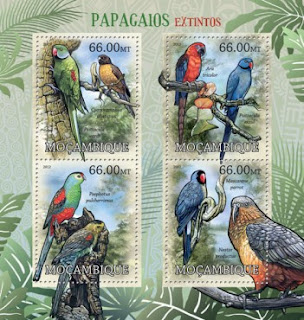 monkeys, extinct animals of America, birds of "pray" (that is how it is spelt on the Stamperija website), birds (2 sets), cockroaches:- 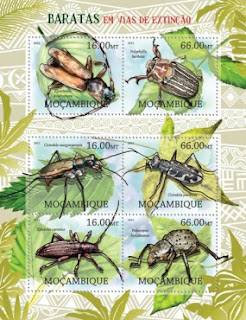 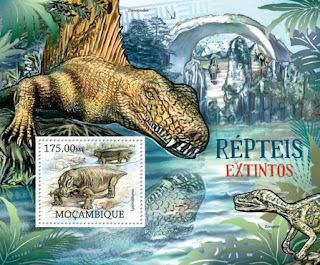