I obtained my first two British gold medal winners miniature sheets today (2 August 2012) at midday from the Head Post Office in Victoria Square in Birmingham, the second largest city in Britain. There did not appear to be anyone else buying the items at the time. I must have been the first person to buy them from the particular counter I visited since the very helpful assistant had to get the sheets out of her drawer and separated them while I waited. The miniature sheets came in sheets of 4 and each contained 6 stamps so there are 24 stamps to a sheet and each miniature sheet is separated from the others by rouletting. I asked whether the stamps were being sold individually and was told that they were only to be sold as complete miniature sheets which flies in the face of what Royal Mail has previously told collectors. There is a margin to the left of the whole sheet and the bottom miniature sheet bears the "London 2012" logo in gold with the inscription "GMW1 Issue date 2 August 2012" in a line with "Printer location Solihull" beneath it (Helen Glover and Heather Manning stamp):- 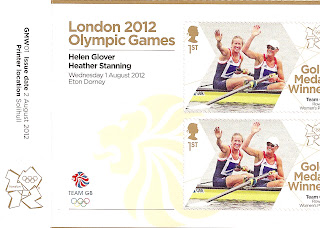 The Bradley Wiggins stamp has a similar inscription in the margin opposite the bottom miniature sheet but is numbered GMW 02:- 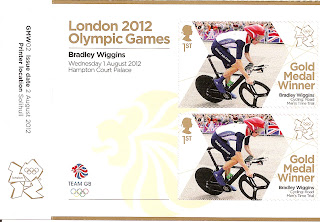 As Britain won 3 more gold medals on 2 August, there will be 3 more miniature sheets to be issued on 3 August :- Peter Wilson for the Shooting shotgun men's double trap:- 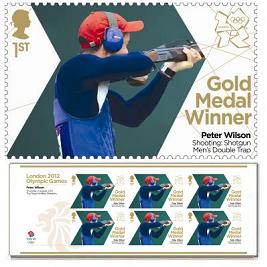 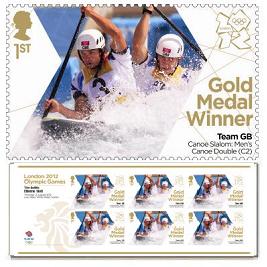 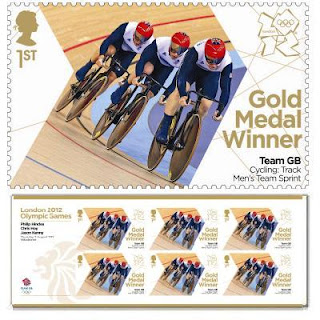