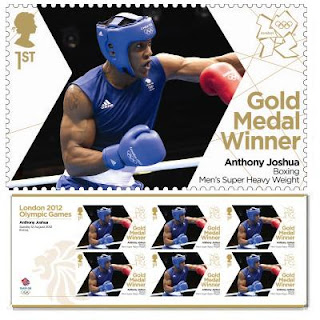 The Games are over. I visited the post office this morning for the last time to buy the 29th stamp issued by Royal Mail to commemorate a British gold medal winner in the Games of the 30th Olympiad held on London. This final stamp commemorates Anthony Joshua who is the gold medallist in the Boxing men's super heavy weight event which means that not only did "Team GB" end the games in 3rd place of the medals table but that Royal Mail came top of the Commonwealth postal administrations' gold medallist stamp table, with Australia Post trailing far behind with only 7 stamps after a somewhat dismal overall performance by that country's Olympic sportsmen and women. A complete set of Royal Mail gold medallist miniature sheets has a face value of £104.40 and if you want a set produced by each of the 6 printers (and I believe there are some shade differences in the stamps produced by the various printers) then say goodbye to £626.40p (and that's face value and does not take into account the amount added on for dealers to make a profit as well as value added tax). I have acquired all 29 miniature sheets with final printing carried out in Solihull and each one is the bottom miniature sheet of the pane of 4 so that they bear the stamp number (GMW 01 - 29) and the site of the final printing. I think that is as far as I go. It is possible to make life a lot easier (and cheaper) by buying a single stamp from each miniature sheet at a much more modest total cost of £17.40p as postal counter assistants were cutting out individual stamps at request for customers so anyone can have a philatelic souvenir of the games for a very reasonable price. 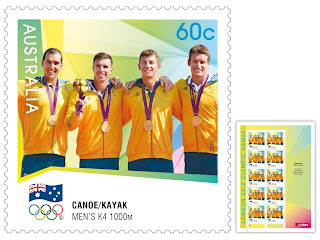 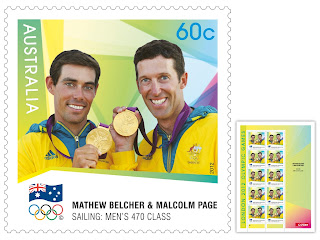 The 2 as yet unillustrated Australian medal winners stamps are depicted above. I have already suggested that we may soon expect an issue from Grenada to depict the winner of that country's first ever Olympic gold medal  and surely Jamaica will issue stamps to commemorate the success of Usain Bolt and his fellow athletes. There may be an issue from Uganda as one of its athletes won the marathon and Kenyan runners, too, were successful in athletics. Cyprus, too, won its first Olympic medal, a bronze in the sailing, so a stamp from Cyprus may be on its way. Nevertheless, for the final time, the Commonwealth postal administrations gold medallist stamp table now reads:-
Congratulations to Royal Mail on carrying out this enormous project successfully and popularising stamp collecting among many thousands of people who would not normally collect stamps and...making what I expect will be a gigantic financial profit on the issue.