🇬🇬 In Blog 1351 I detailed and illustrated the Guernsey Post set of 6 stamps due to be released on 22 January 2019 to commemorate the Chinese New Year - the Year of The Pig - and I now illustrate the accompanying miniature sheet which contains the 6 stamps and which is being sold for £4.26p. We won't be surprised that Guernsey Post has been unable to resist issuing a limited edition 'gold foil' (200 in total) miniature sheet (sold in the usual perspex display stands) and that it's asking for £95 from those who decide to buy the item. How depressing can new issue collecting be? Rating:- 0. 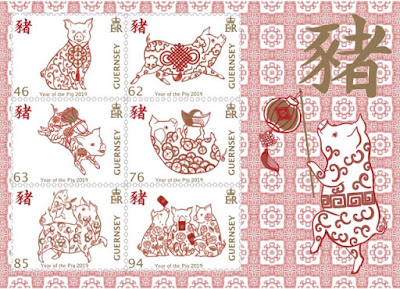 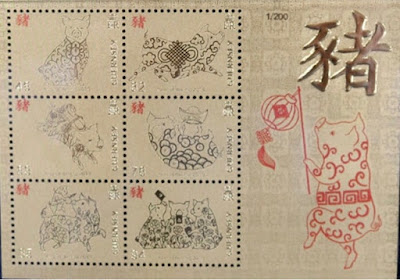 🇲🇲 Myanmar Posts issued a single stamp on 6 January 2019 to commemorate the month of Pyatho which is the tenth month of the calendar of Myanmar. The stamp depicts the symbolic flower of the month which is the Kwanyo (Clematis smilacifolia) and the Royal Equestrian Festival which is held during Pyatho. What an interesting stamp. Rating:- *****.

🇱🇰 Sri Lanka Post issued a single LKR15.00 stamp on 5 January 2019 to commemorate the Declaration of Therevada Tripitaka (the Buddhist scriptures) as a national treasure. Rating:- ****. 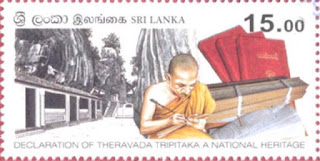 🇭🇰 Hong Kong Post will issue its Lunar new year stamps on 12 January 2019 to commemorate the start of the Year of The Pig. There are a large number of items associated with the issue and collectors can obtain a set of 4 stamps, a single stamp miniature sheet, 1 'silk' miniature sheet, 2 'Heartwarming' stamps printed in sheetlets of 8 with attached labels, 1 'Gold and silver' sheetlet marking the end of the Year of the Dog and the beginning of the Year of The Pig and 4 'Silver hot foil lunar new year animal stamps' which are 4 x $10 stamps featuring the past four animals - Monkey, Rooster, Dog and Pig'. The issue was designed by Wong Chun-hong and lithographed by Enschedé and perforated 13.5 x 14.5. The silk miniature sheet and metallic miniature sheets were lithographed with additional printing techniques by Cartor and are perforated 13.5. I always like Hong Kong Post's Chinese New Year issues even if they may be considered to be somewhat excessive. Rating:- *****. 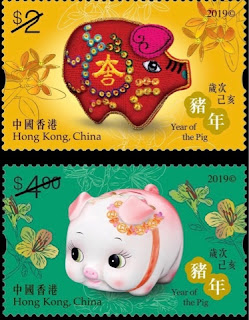 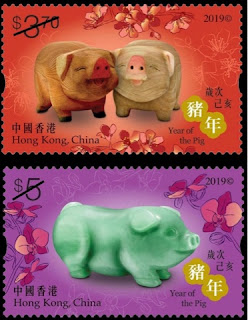 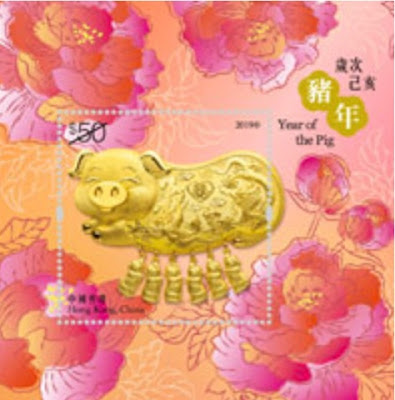 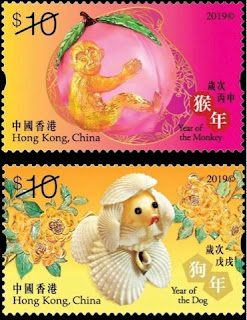 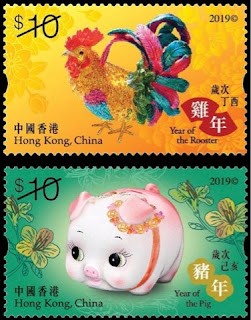 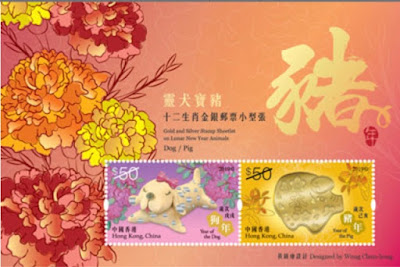 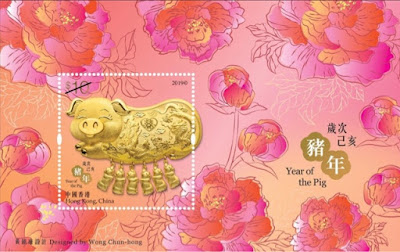 🇬🇧 A dealer on an Internet auction site points out that the first Royal Mail stamp of 2019 has already been issued. The Machin Head design of the Post and Go stamps with the additional 'The Postal Museum' inscription replaced the 'Winter Greenery' stamps which had been dispensed over the Christmas period on 1 January 2019 and seem to have the MA15 security code for the first time (previously having been MA14). Perhaps this is not a spectular start to 2019 but it is worth mentioning.