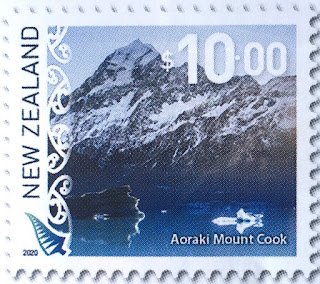 🇳🇿 New Zealand Post will issue 2 new definitives in 3 June 2020 which are part of its ongoing Scenic series. The designs feature Island Bay at Wellington ($4) in the North Island and Mount Cook in the South Island ($10). The $4 will be issued to take notice of the rise in the ‘domestic oversized letter’ rate. The stamps were designed by New Zealand Post and lithographed by Southern Colour Print. Rating:- ***. 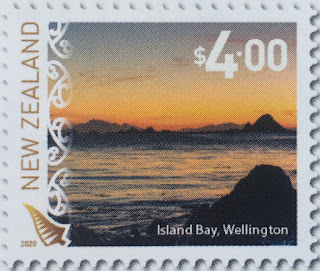 🇲🇺 Who doesn’t like nice covers from small obscure islands? I recently obtained a cover dating back to 2011 from the dealer Steven Zirinsky originating from the pair of small and remote islands, which together are described by the Encyclopaedia Britannica as a ‘dependency’ of Mauritius, the Agaléga Islands, 1000km from Mauritius and populated by just 300 people.
Agaléga has two main settlements - Vingt Cinq on North Island, which rather unnervingly is named after the number of whip strokes the island’s French copra industry overseer would administer to slaves working on the island before the British seized the islands during the Napoleonic Wars - and Sainte Rite on South Island (in the Catholic faith Saint Rita is the patron saint of impossible causes which again may reflect the dire life the islands’ unfortunate slaves experienced).
Agaléga passed into the sovereignty of Mauritius when the latter was granted independence by The United Kingdom in 1968. The distant islands were largely neglected by Mauritius until recent years but now are a source of controversy because, without consulting the local inhabitants, the government in Port Louis has agreed with the Indian government that a large Indian naval base be built at Agaléga as part of India’s programme of extending itself into the small Indian Ocean states to counter Chinese expansion in the same area. Whereas, quite justifiably, the Mauritian government has constantly protested about British treatment of the Chagosians at Diego Garcia from where the British expelled the local people so that a large American naval base could be built there, the Mauritians now find themselves in the dock about the treatment of the Agalégans.
Recently groups of Mauritians have joined with Agalégans and Rodriguans to form the Koalision Zilwa Pou Lape (Islanders Coalition For Peace) to demonstrate their solidarity with the islanders of Agaléga as well as the inhabitants of Assumption in Seychelles (the government there too having reached agreement with India for the building of an Indian naval base on the remote island) and with Ilois, the former inhabitants of Diego Garcia.
In Blog 1492 and 1132 I mentioned stamps issued by Mauritius Post which staked claims by philatelic means to Diego Garcia and the other islands of the British Indian Ocean Territory as well as the island of Tromelin (an island of the French Southern And Antarctic Territories) and a map depicted on one of the designs also included Agaléga. 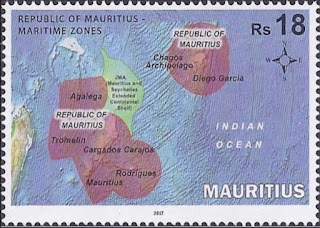 A similar map on a stamp released by the Post Office of Seychelles was almost the cause of a nasty diplomatic incident between Seychelles and Mauritius. The stamp inscribed Zil Eloigne Sesel Seychelles (Seychelles Outer Islands) was to have been part of a set of 3 honouring the travelling post office issued in 1980 and was intended to depict the extent of the Seychelles Outer Islands. An error unfortunately resulted in Agaléga being included in the area claimed by Seychelles on the depicted map which which would not have gone down well with the Mauritians but fortunately the error was noticed before the stamp could be issued and it was replaced by a similar stamp with a corrected map.

Stamp designers who depict maps on stamps, as with the depiction of national flags, always run the great risk of obloquy being piled upon them if an error is made given national sensitivities about a country having its flag incorrectly depicted or part of its territory being omitted from a map, or worse still, being shown as belonging to someone else.
Agaléga has hardly been featured at all on stamps from Mauritius - apart from the above mentioned map stamps there have been a set featuring the copra trade and two others - both from sets of four. One stamp from a set titled ‘Islands of the State of Mauritius’ was clearly an early philatelic attempt to lay down Mauritius’ claims to Tromelin and Chagos since each are featured in the set. Agaléga is represented in this set, issued on 13 December 1991 and designed by the great Gyula Vasarhelyi, by a single stamp depicting a Glossy Ibis. 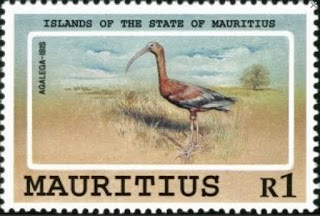 A single stamp from a set issued on 12 September 2001, designed by Nick Shewring, commemorating Mauritius’ economic achievements in the 20th century depicted a solar energy plant in North Island of Agaléga which had been opened in April 1998 to provide energy to 10 houses. 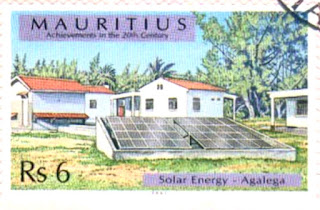 The Copra industry on Agaléga was featured on a set of 4 stamps issued on 5 December 2001, designed by Ross Watton. The Stanley Gibbons Catalogue merely titles the set “Coconut Industry” and so one would not really know that the issue was about Agaléga in particular from the Gibbons listing. Sadly also the first day cover was cancelled by a standard philatelic bureau postmark rather than one applied at Agaléga or even with the islands’ name included in the postmark. 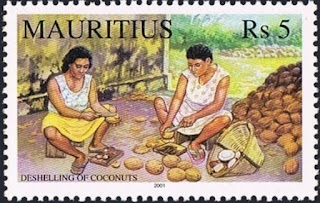 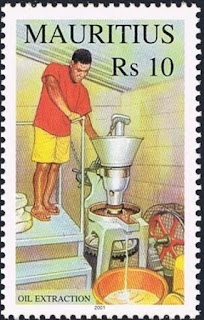 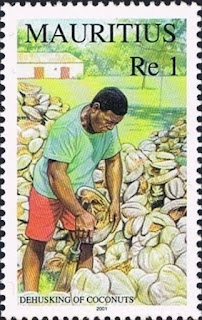 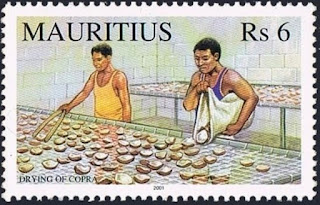 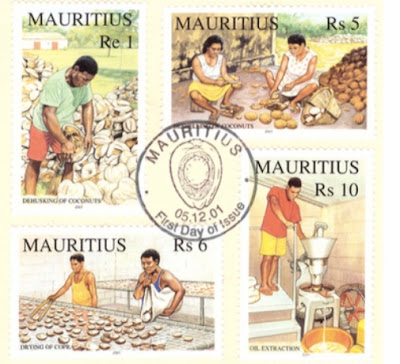 My cover from Agaléga has contemporary Mauritius stamps fixed to it with a circular cancellation applied twice, one to the stamps and the other to the envelope, residing ‘AGALEGA POST OFFICE’ and ‘15 SE/11’ at the centre. It is a delightful item and from a tiny speck in The Commonwealth of which we may hear more in the future if trouble bubbles up in relation to the building of an Indian naval base there. 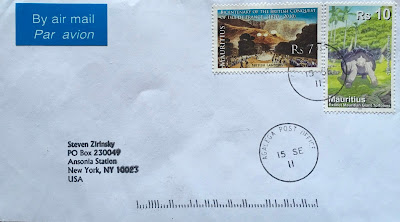 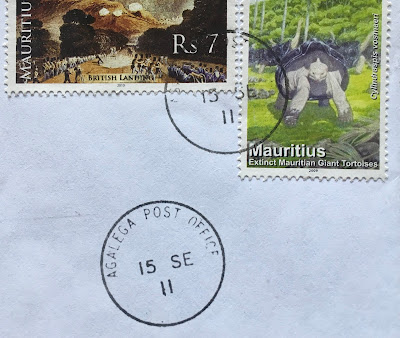 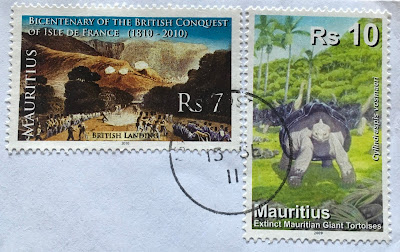 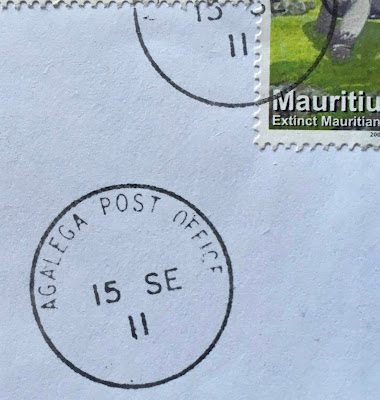 A cover illustrated on the internet suggests that the same postmark was in use on the island 4 years later in 2015:- 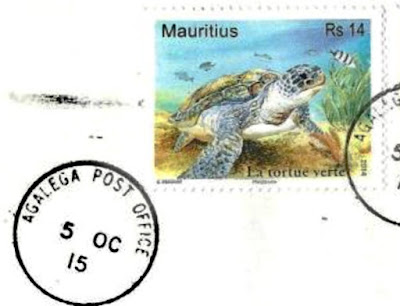 Mauritius Post opened the islands’ post office on 10 July 2002 but found that the local population was not monetised and paid for goods by exchange bartering using items such as coconuts. The island’s economy was therefore monetised to coincide with the post office’s opening. It might have been an occasion for a stamp issue featuring the island but sadly Mauritius Post missed the boat with that one.


However the Mauritius Philatelic Society published a report in its 3rd Bulletin of 2002 about the opening of the post office which was attended by the then President of Mauritius Hon Karl Offman and the then Postmaster General of Mauritius, Hafiz Amir. The Outer Islands Development Corporation which ran the copra industry on Agaléga prepared a special commemorative cover to note the monetisation on Agaléga and the post office’s opening and this depicted the post office and a map of Agaléga. The Rs1, Rs5 and Rs6 values of the 1991 ‘Agaléga Copra Trade’ issue were fixed to the cover and cancelled with the above postmarked dated ‘10 JL 02’. Sadly I do not have an illustration of this interesting cover. 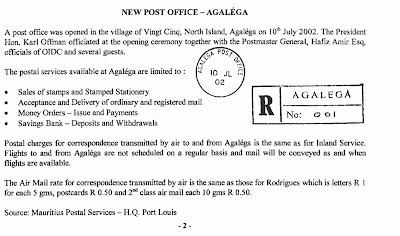