🇳🇿 Following on from the report in Blog 1657 of the children’s stamp design competition underway in Guernsey it appears that New Zealand Post has also been carrying out a competition, now closed, in which New Zealanders have been asked to provide photographs of their teddy bears. In the Share Your Bears campaign New Zealanders have been asked to photograph their bears in their windows of their homes and then post the photos on the New Zealand Post Facebook page along with some information about their toys and about life at home during the ‘lockdown’ there. It seems that New Zealanders have been participating in the ‘New Zealand Bear Hunt’ which involves placing teddy bears in house windows and thereby “creating a magical experience for kids (and big kids) during a stressful time”, according to the New Zealand Post Head of Stamps, Antony Harris.
Six of the photographs are to be chosen to be depicted on a set of 6 stamps combined in, I think, a sheet as we have seen on previous occasions including last year’s royal visit, and a prize draw will be held as an incentive to encourage people to participate in the competition. Three dollars from the sale of each sheet will be donated to the New Zealand Red Cross while it continues “to support New Zealanders to stay at home and save lives”.
I imagine this sheet will be issued in the very near future. New Zealand Post was planning to release a set of stamps on 6 May 2020 to commemorate the now postponed Tokyo Olympic Games and this Teddy Bear issue may well replace it.

🇯🇪 As well as the already announced stamps, miniature sheet and Post and Go stamps Jersey Post intends to also issue another ‘Commemorative sheet’ to note the 75th anniversary of the island’s liberation at the end of the Second World War from occupation by Nazi forces. The price of the item will be £12.50p. The sheet is made up of 20 x ‘Local letter’ rate stamps with attached labels. I think the date of issue will be 9 May 2020. Rating:- 0. 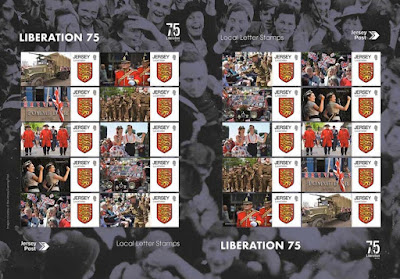 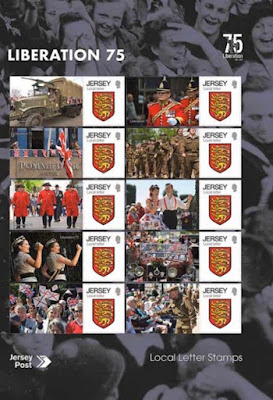 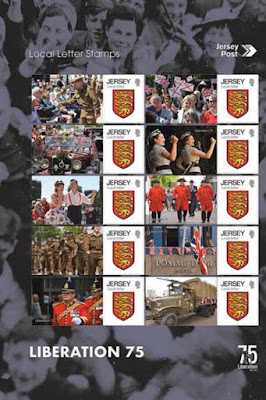