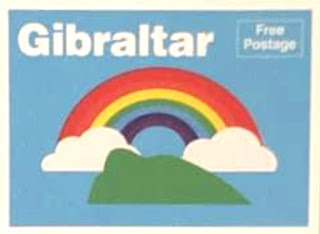 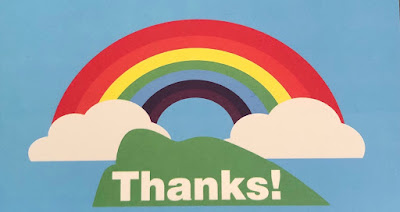 🇬🇮 Here is an item I have missed up till now even though I see that a tweet about it was put out by the Royal Gibraltar Post Office on 17 April 2020. It appears that a pre-stamped postcard was issued on Monday 20 April 2020 and distributed gratis to homes in Gibraltar on the subject of the population’s response to the COVID-19 outbreak in the territory. As can be seen from the tweet it was intended that the local people, and especially children, who received the postcard should use it to write a message to someone who “would appreciate receiving” it. “It is your decision who this someone could be, maybe a relative or friend working on the frontline, a grandparent staying at home or a team of people or business doing an exemplary job during these exceptional times .... “ “Our postmen and postwomen will deliver the postcards free of charge to any local address”
The tweet requests that recipients of the card (hopefully bearing a kind and pleasant message) upload a picture of it on to social media using the hashtag #thankinggibraltar. I suppose this represents free publicity for the postal service which is a good way of recouping costs incurred in producing the postcards (though I speculate that one or more of the ‘Express Group of companies Rizzo’s Daily and Giboil Petrol’ may have been involved in sponsoring the cards though they may simply be additional locations for distribution of the cards). The tweet informs us that “thousands of extra postcards are available to pick up free of charge from the Post Office, all shops of (the above named businesses)” which conjures up a picture of queues forming for their free postcards. I don’t expect that happened but it does read like an invitation to visit shops to receive free gifts at a time when you do not really want anyone to be out on the streets.
Nevertheless this is another interesting item, albeit postal stationery rather than postage stamp, from a Commonwealth territory associated with the Coronavirus pandemic and anyone making a themed collection around the subject will surely want to add this item to that collection.
A proper stamp in the same design (at a sensible face value) would be very acceptable. 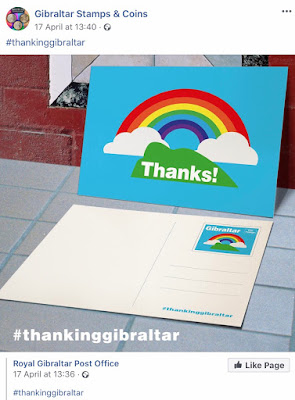 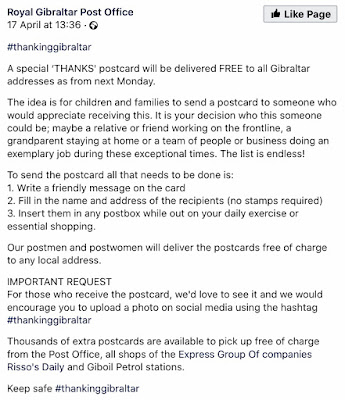 🇬🇧 Ian Billings has recorded in his Norvic Philatelic Blog that the first Machin Head definitive stamp reprints have been made by Royal Mail - he notes that 2 counter sheet values which should have the code M20L have been produced - the 1st Class Large Signed For rate  (now £2.45p) and the Special Delivery 500g (£7.50p). The stamps were reprinted by Walsall Security Printers at the beginning of February.

🇲🇾 Pos Malaysia reopened its post offices on 4 May 2020 after a period of extended closure due to the COVID-19 pandemic. 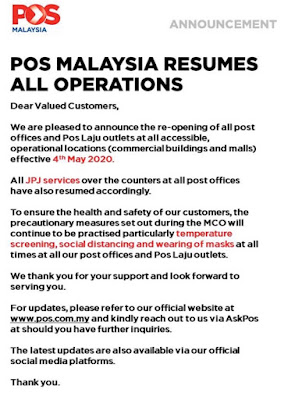