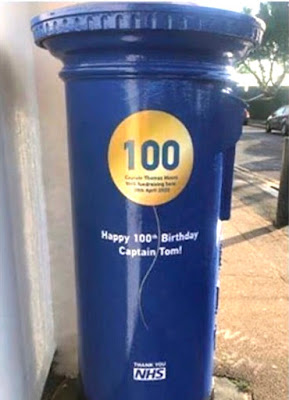 🇬🇧 In some ways it seems wrong, merely because it has now become a habit, not to have something in each Blog about the COVID-19 pandemic and I think that the letter depicted below is of interest not just to historians but also to stamp collectors item though it would be rather exciting to see the cover it was sent in. This is the letter sent to Britain’s new National Treasure, who should now be known as Colonel Tom, by the British prime minister, Boris Johnson, on the occasion of Thomas Moore’s 100th birthday and to recognise his service to the country in raising £32 million for a fund for health service workers by recognising him as a Point of Light. Point of Light is an award by the prime minister to outstanding volunteers who have benefitted their communities. 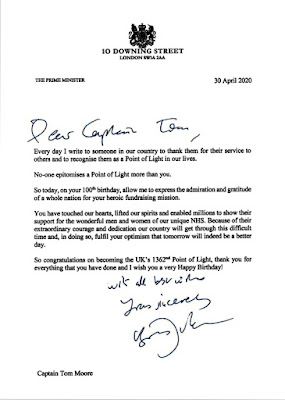 Meanwhile, in addition to using a special postmark as previously described (see Blogs 1649, 1652 and 1653),  Royal Mail also garnered itself some publicity by going to the great expense of painting a postbox in ‘NHS blue’ and commemorating Colonel Tom’s birthday on it. The inscription on the post box reads “100/Captain Thomas Moore/NHS fundraising hero/30th April 2020”  in blue on a gold balloon with a trailing white string and below, “Happy 100th Birthday/Captain Tom!” in white and at the bottom of the postbox, “THANK YOU NHS” in white.
The postbox is situated on Bedford Road (postcode MK43 0LA) in the village of Marston Mortaine where the home of Colonel Tom is located. With all of these commemorative post boxes making appearances in recent years I have become a bit of a postbox tourist but fear that there’s little chance of travelling all the way from the West Midlands to Bedfordshire to go to see Colonel Tom’s postbox due to the present travel restrictions. 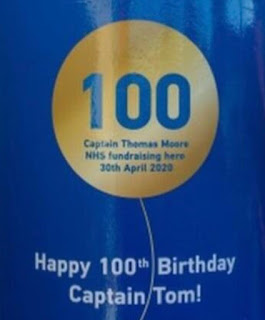 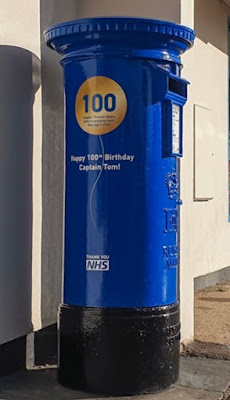 I was delighted to receive in today’s mail another very pleasing Colonel Tom cover (see Blogs 1652 and 1653) with the previously mentioned Royal Mail postmark used at Birmingham Mail Centre but dated 30 April 2020, the date of his actual birthday. I think that really is a notable piece of postal history related to the current pandemic. I suppose it could be bettered by a cover of the same date from Bedfordshire posted in the newly painted postbox but you can’t have everything. 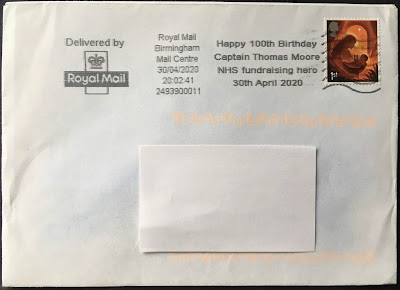 Many other things have happened in the past few days including Colonel Tom having railway engines named after him, a spitfire and hurricane aircraft flypast in his honour and being made an honorary member of the England cricket team and a Freeman of the City of London as well as receiving his letter from Boris and becoming the oldest person to ever have a number 1 record in the British music charts. Rather surprisingly I thought, his record is a cover of the song “You’ll never walk alone” which of course is very apt though I might have expected a song by Vera Lynn, ‘The Forces Sweetheart’, who helped to keep up the nation’s spirits during the dark days of the Second World War, to have been the choice for him to croon along with. ‘White Cliffs Of Dover’ or ‘We’ll Meet Again’ perhaps.
Dame Vera Lynn, herself now 103 years old, was as much a symbol of the national spirit during the Second World War as Churchill himself and was featured on the cover of one of the 4 booklets issued by Royal Mail in 1995 to commemorate the 50th anniversary of the end of the Second World War. Those were the days when booklets contained 4 x 25p stamps which was the postage rate to countries in what was then called The European Community. It’s a pity that Royal Mail did not depict her on one of the upcoming stamps to commemorate the 75th anniversary of the end of the war in Europe.
I seem to recall that Royal Mail used a special postmark in March 2017 to commemorate Dame Vera’s 100th Birthday but I may be mistaken as I can not find an example of it and I have not tracked down a picture of such a postmark on Ian Billings’ indispensable Norvic Philatelic Blog which is the first place to go to when trying to find information on such items. Jersey Post did issue its Jersey Flag Post and Go stamp on 20 March 2017 to commemorate Dame Vera’s birthday by adding the inscription “We’ll meet again” to the stamp with the added location identifier of ‘Broad Street’. 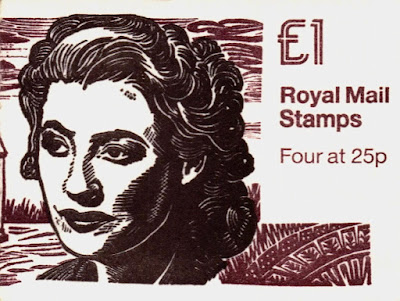 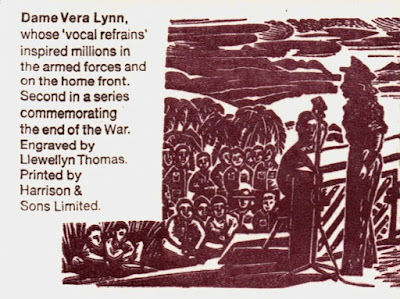 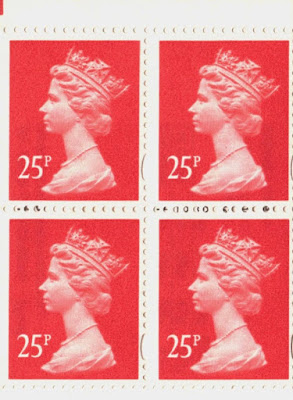 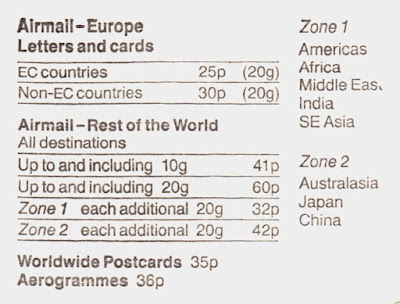 At the moment the nation acknowledges every Thursday evening those who are working in the frontline of the National Health Service at considerable risk to themselves by coming out of doors and applauding them. Another medical hero of the past (before the NHS existed) was also depicted on the cover of one of the 1995 End of the Second World War booklets is Archibald McIndoe who was a plastic surgeon who worked to improve the lives of badly burnt and disfigured airmen injured during the course of their duties. Perhaps Royal Mail could think about commemorating philatelically the medical and other health and other service workers who have risked themselves in this latest war or will it consider painting another postbox to be sufficient?
And, by the way, I’m not forgetting the bravery of the postal workers who at this present time keep my post popping through my letterbox. 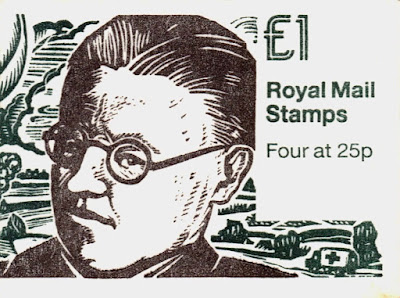 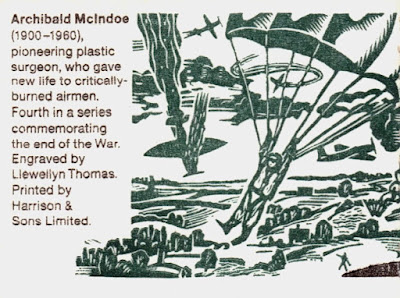 Addendum:- Reply to Rob K’s comment (see below). Thank you for your comment with its appealing  suggestion. Apparently in 2018 there were 13370 centenarians in Britain (5% less than 2017 because of the falling birth rate during the First World War) and I suppose that number may be just a little too many stamps for even Royal Mail to manage to put ouT.

Reply to Norvic’s comment. (See below) Thank you Ian. I suspect I was confusing in my memory the Jersey Post and Go Stamp with a postmark probably because both forms pf philatelic commemoration are cheap and manage to attract inexpensive publicity for the postal administrations.

Reply to Eric Lau’s comment, Hello Eric, please feel free to use any photographs you wish from the Blog. Best wishes, WK.