🇬🇮 The Royal Gibraltar Post Office issued a set of 4 stamps on 30 April 2020 on the subject of local schools in Gibraltar. The photographs by Karl Ullger used for the designs by Stephen Perera do not show us particularly beautiful buildings so perhaps they are more functional than decorative. It may be that these are architectural masterpieces but the stamps do not convey that that would be the case. The designs also miss the point that a school is very much more than the building itself and what goes on inside is much more important that what it looks like from the outside. Having said that the point of the issue appears to be that the Gibraltar government has built some new schools in recent years and these stamps are issued to highlight the new places of education. The set was lithographed by Cartor. The total face value of the stamps is a rather expensive £7.82p. Rating:- **. 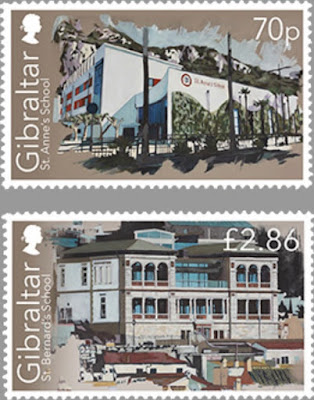 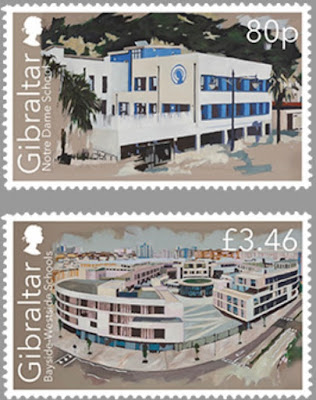 🇸🇬 Singapore Post has announced that all of its stamp issues planned for release in April and May 2020 have been postponed to a later as yet undetermined date.

🇬🇧 Captain Thomas Moore - ‘Captain Tom’ - Britain’s new national treasure, whose 100th birthday is being commemorated by a special Royal Mail postmark during this present week (see Blogs 1649 and 1652), has been promoted to the rank of Honorary Colonel and so one wonders if Royal Mail might alter the postmark to take account of his new rank.
Meanwhile, a lovely cover arrived in the post today with the Captain Tom postmark dated 29 April 2020 neatly placed on a 1st Class stamp of the 2019 Christmas issue showing the Madonna and child.  The choice of stamp may be fortuitous as it ties in with another piece of good news that cheered up Britain on the 29 April - the announcement of the birth of a boy to the British prime minister and his partner. 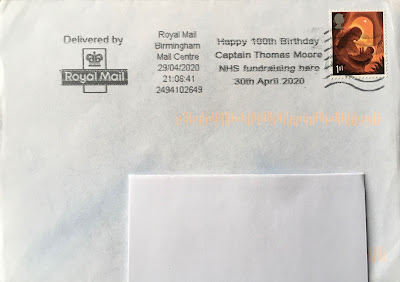 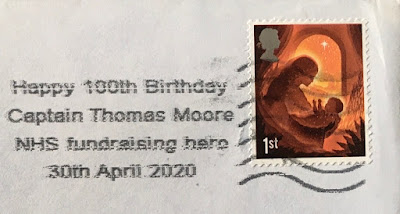