🇯🇪 Jersey Post will issue 7 more Post and Go stamps on 9 May 2020 to commemorate the 75th anniversary of the island’s liberation from Nazi occupation at the end of the Second World War. The ‘Jersey Flag’ stamp will be issued with an additional inscription ‘Liberation 75/1945 - 2020’ and will be dispensed from kiosk JE02 while the 6 ‘Jersey Arms’ stamps will be additionally inscribed ’Libérâthion75/1945 - 2020’ (in the local Jèrriais language) and dispensed in a coil strip of one each of the 6 different stamps.  A notable anniversary to be commemorated but for how much longer is Jersey Post going to release these intensely dull products? Rating:- ***. 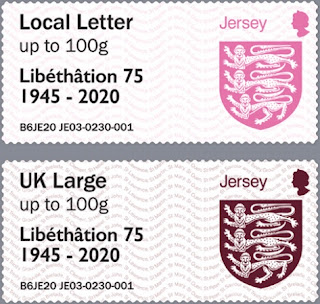 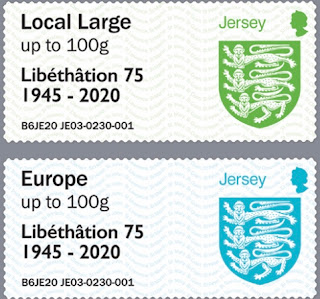 🇨🇰🇹🇴 I have recently received (late April), rather strangely, some notes on ‘new issues’ (though dated December 2019) from the ‘Boutique Philatelic Agency’, as it calls itself, Philatelic Collector, which has two clients - the TWO postal services of Cook Islands and Tonga (for which PCI manages to produce philatelic items for SIX philatelic entities). It seems odd that the December 2019 news sheet should be sent out 4 months after its date and it is not at all helpful as all the featured items have been depicted on the agency’s website for some time now. It would have been far more helpful to receive news of more recent products such as those depicting birds and wildlife of the world being offered recently for sale on internet auction sites by a Russian dealer. Perhaps these later items will soon appear on the agency’s website. 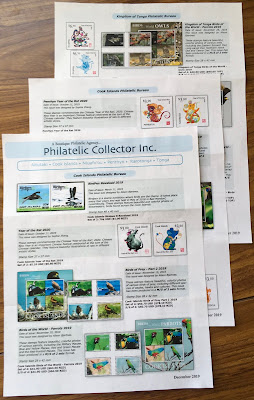 There is one very interesting piece of this news sheet of which is it worth taking note - the ‘new issue order form’ which details all the products (71 ‘stamps’ and 12 ‘miniature sheets’) being offered for sale  ‘issued’ in the period 11 October - 12 December 2019  (plus a pair of surcharges dating back to 11 March 2019). It is stated that all the items are being offered for sale ‘at face value’. The total price of one of each of the 83 items amounts to a remarkable US$777.25c (£628.59p) and if one is so inclined first day covers of all items may also be purchased for the admirable sum of US$810.25c and cancelled to order stamps are offered at the same price as mint items. It’s clear, isn’t it?, that the agency does not really need to sell many items before it is on its way to making a large financial profit and no doubt, as long as people keep buying, then the agency will keep producing them. These are items with a price but not with a value. As always, caveat emptor.
Posted by White Knight at 09:22