🇸🇱 For the third consecutive year Sierra Leone wins the title ‘The Commonwealth’s Greediest Stamp Issuing Territory’, this time for the year 2019. Not surprisingly, the two top philatelic entities in the list of Commonwealth territories which issued most stamps and other philatelic items (miniature sheets, booklets, personalised stamps, Post and Go stamps, ‘Collectors sheets’) during 2019 were ‘clients’ of the notorious philatelic agency, the Lithuania based Stamperija.

It is worth noting that both Stamperija and IGPC produce imperforate versions of most of the stamps they issue so the numbers of stamps released by the philatelic entities which are clients of theirs in the above list could probably be doubled. Guernsey Post’s total is boosted by the large number of Post and Go visiting cruise ships stamps which were issued during the summer of 2019. I assume that there will not be many cruise ships visiting the island this year as a result of the Covid-19 pandemic.

The numbers in both groups speak for themselves. It is not desirable when thinking of the future of new issue collecting that territories issue no stamps in any given year as such a policy will inevitably lead to a falling away of interest - if there’s nothing new to add to one’s collection then it just becomes a lifeless possession to be eventually put away in a cupboard and forgotten about. On the other hand the issue of no new stamps is to be preferred to the release of 1566 new stamps or even 268 new items as is the case with Royal Mail.
Who knows what effect the Covid-19 pandemic will have on the release during the course of the coming 12 months? The list of countries making up ‘The Commonwealth’s Greediest Stamp Issuing Territories In 2020’ may look very different from this year’s.

🇰🇪 Further to the mention in Blog 1628 of an issue of 3 stamps on 15 February 2020 by the postal service of Kenya which commemorates the 60th anniversary of the Aga Khan Hospital, it appears that another issue has also been released in the form a single stamp which commemorates the 20th anniversary of the founding of the Postal Corporation of Kenya.
I do not know any details about this stamp, not even the date of issue, but the 20th anniversary of the postal service occurred in 2019 so this issue may date back to last year though it may equally have been issued in 2020. Rating:- ***. 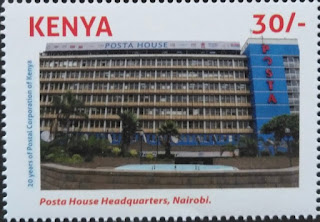 🇮🇲 The Eu value of the Isle Of Man Post Office set of 6 stamps to be issued on 22April 2020 to commemorate the 400th anniversary of the arrival of the Pilgrim Fathers in America (see Blog 1633) is the Isle Of Man PO’s contribution to this year’s EUROPA omnibus series which is centred on the theme of ‘ancient mail routes’. The stamp will be issued in a special sheetlet of 10 as depicted below. 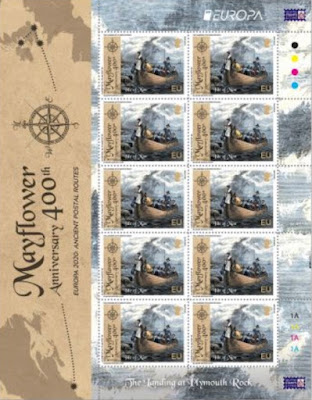