Coronavirus - Getting the message across or not as the case may be:-

🇬🇧 I received 3 items of mail this morning all with the slogan postmark applied by Royal Mail exhorting me and other recipients of similarly postmarked letters to, “STAY HOME/PROTECT THE NHS/SAVE LIVES/????? ?????”. This slogan postmark which comes from the Birmingham area is different from that featured in a post on Stamp Boards by Norvic (see Blog 1631) but unfortunately, on all three covers, it is barely legible. The bottom line of the slogan is indecipherable as are the parts of the slogan giving the location and date of posting.
It’s all very well, even laudable, including an important public health message as part of a postmark but if the message is illegible then the value of doing so is negated somewhat. This is NOT getting the message across.
It looks to me as though Royal Mail should use a little more ink in its cancelling machines if it wants people to understand what message it’s trying to deliver but perhaps someone has been hoarding printing ink along with lavatory paper and RM is having to ration its usage!

🇵🇳 Even the philatelic service provided by Bounty Post, the postal service of Pitcairn Islands, has been affected by the Coronavirus outbreak though as its office is situated in Wellington in New Zealand where a ‘lock down’ is taking place perhaps that is not too surprising.

🇲🇾 Although no precise date of issue had been indicated it was expected that the next stamp issue to be released by Pos Malaysia would be one on the subject of ‘Visit Malaysia 2020’ though I suppose that would now be best changed to ‘Don’t Visit Malaysia 2020’! 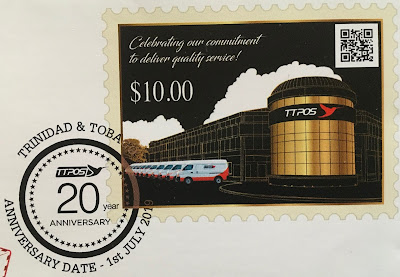 🇹🇹 I have now received examples of the stamps I highlighted in Blog 1630 which were released by TT Post, the postal service of Trinidad And Tobago, to commemorate the 20th anniversary of the establishment of TT Post. In Blog 1630 I mentioned that there were 2 values - a $1 and a $10 but the latter appeared to only be available on first day cover. In fact there appears to be NO $10 value -  now I have received an example it is apparent that the $10 item is actually a pre-stamped envelope and NOT an individual postage stamp and that this issue is made up of just a single stamp - the $1.