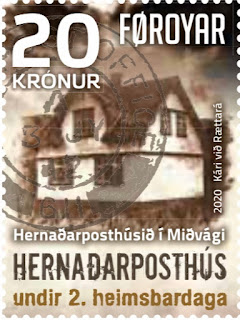 🇫🇴 Blog 443 discussed the British occupation of the Faroe Islands from 1940 to 1945 and the stamps issued during that period and also made a fleeting mention of the British Field Post Offices on the island during that time. At the end of the piece a mention was made of the pair of stamps issued by the postal service of the Faroe Islands on 19 September 2005 to commemorate the 60th anniversary of the ending of that occupation.
Now the Faroe Islands postal service has announced that it will issue a pair of stamps and 1 miniature sheet on 27 April 2020 to coincide with the 75th anniversary of the ending of the Second World War in Europe and the ending of the British military occupation. The issue very cleverly and satisfyingly features  British Forces post offices in the Faroes during the Second World War. The issue was designed by Kári vid Raettará and lithographed by Cartor. The designs depict the Field post offices at Midvági and Tórshavn and the miniature sheet features the 2 post offices with depictions of the three FPO cancellations used in the islands (611, 695 and 219), some Lovat Scouts, an infantry unit which served in the islands from 25 May 1940 until 10 June 1942, some unidentified RAF personnel from the radar station at Eidiskollur (one of the 5 RAF radar stations in the islands) and, at the right hand side of the Stamp, photographs of a Lovat Scout and Captain NMF Corbett RN who was the Naval Officer in Charge and Fortress Commander Faroe Islands from November 1941 to March 1945.
An excellent and extremely interesting article by Brian Hague about this issue and the Forces Post Offices in Faroes has been published in the Faroe Islands postal services February 2020 edition of its stamp bulletin Posta Stamps Faroe Islands (no. 43) which can be accessed on line.
Rating of stamp issue:- *****. 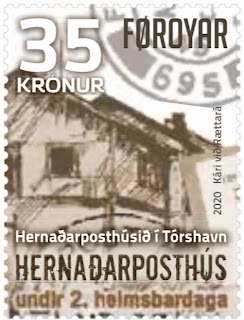 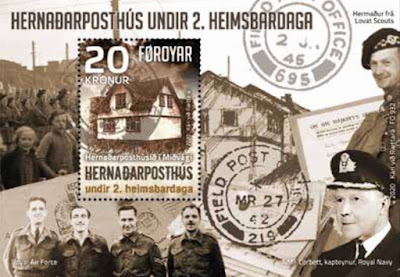 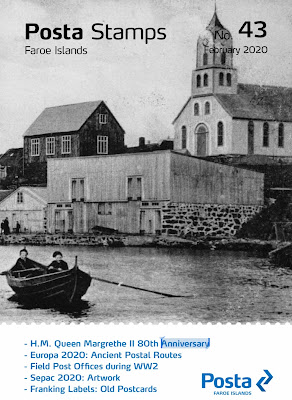 🇮🇲 Isle Of Man Post Office is to issue a set of 6 stamps to commemorate the 250th birth anniversary of the English poet, William Wordsworth. The poet visited the island and his sister lived there and Wordsworth wrote a number of poems about the Isle Of Man. This will be an attractive set combining lines from the poet’s work with pictures of Manx scenes and I am pleased that a subject of direct demonstrable relevance to the island has been chosen as a subject for a stamp issue. Rating:- *****.
Further details are awaited as are good quality illustrations:- 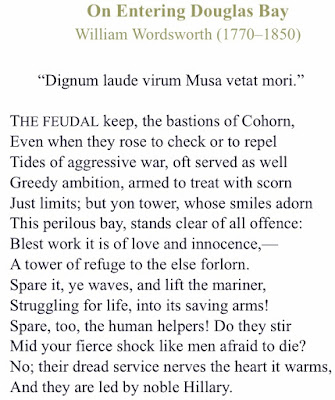 🇲🇹 MaltaPost issued a set of 20 stamps (2 sheetlets each containing 10 different stamps) on 18 March 2020 as the latest part of its ongoing ‘Festa’ series. This issue marks the Festival of St Joseph, 150 years after Pope Pius IX named the saint as Patron of the Universal Church. The issue was designed by MaltaPost from photographs by Mark Micallef Perconte and lithographed by Printex Malta and perforated 14. Rating:- ****. 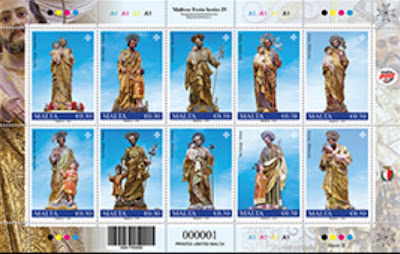 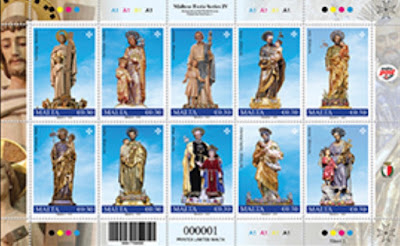 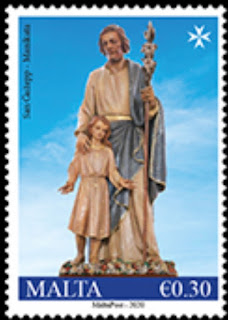 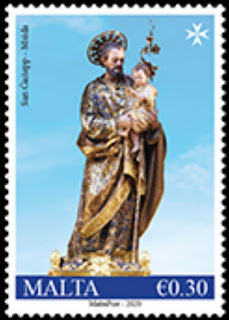 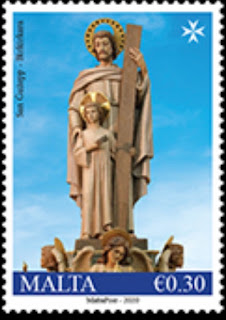 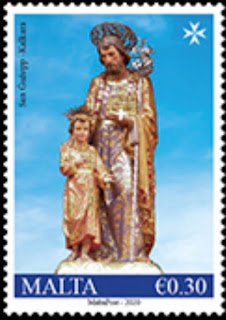 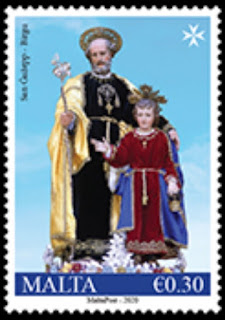 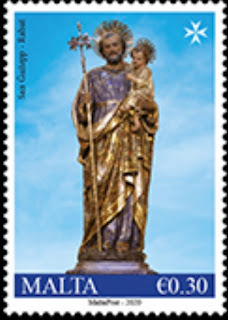 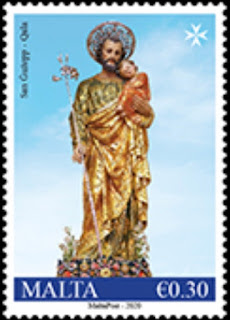 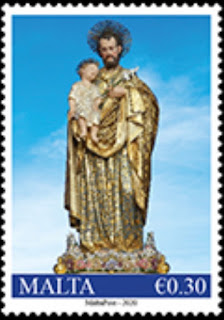 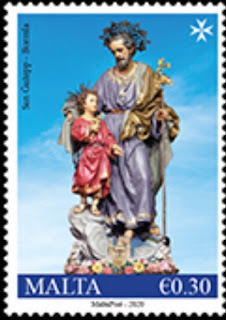 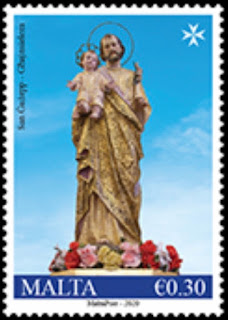 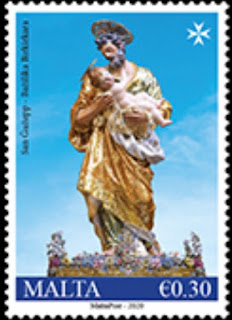 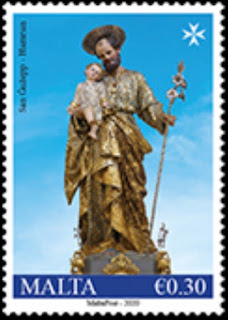 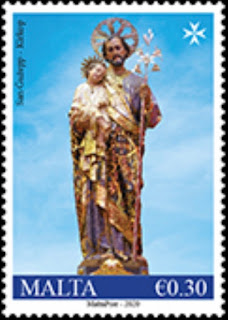 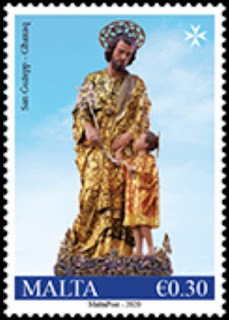 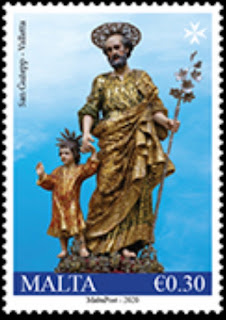 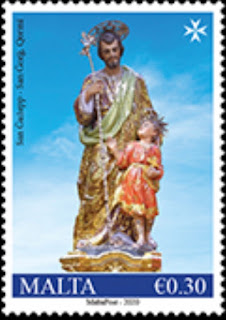 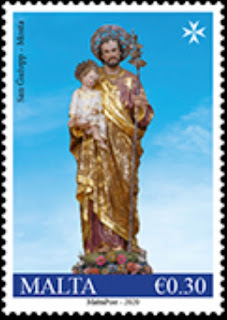 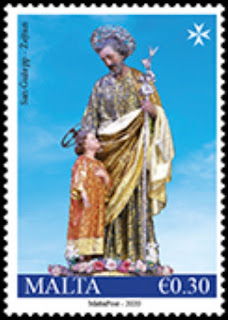 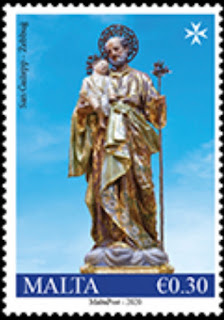 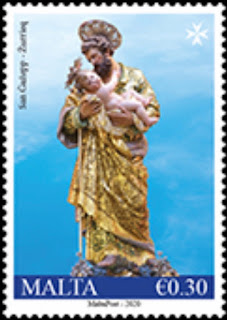