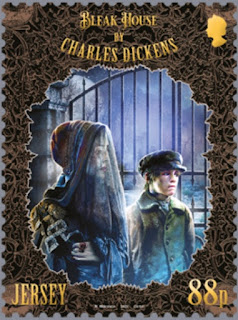 🇯🇪 The British offshore islands seem to compete with each other to issue stamps to commemorate various anniversaries of the writers of important British literature. Now Jersey Post, which issues far too many stamps, has announced that it will release a set of 8 stamps and 1 miniature sheet containing all 8 stamps to note the 150th anniversary of the death of perhaps the most important of then all, Charles Dickens. It’s a very attractive set based on lovely artwork depicting scenes from 8 of Dickens’ novels (sadly mostly the titles used have previously appeared on numerous stamps from various countries though Bleak House is less frequently featured than some). The stamps were designed very pleasingly by Mark and Julie Wilkinson  and the date of issue is planned for 9 June 2020.
My main problem with this issue is that I cannot find any connection between Dickens and Jersey and in the pre-release publicity Jersey Post is only able to tell us that, “In Jersey, a production of a Christmas Carol was performed at the Jersey Arts Centre in December 2019, whilst secondary school, Les Quennevais, presented their version of Oliver Twist at the Jersey Opera House in January of the same year”. Not a very convincing link to me.
As Dickens seems to have no links with Jersey and this issue is just one in an excessively large new issue programme the Rating is ** even though the stamps themselves are very pleasing. 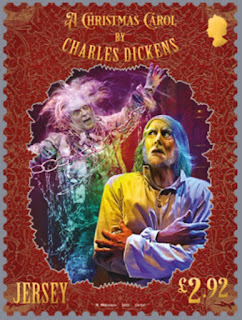 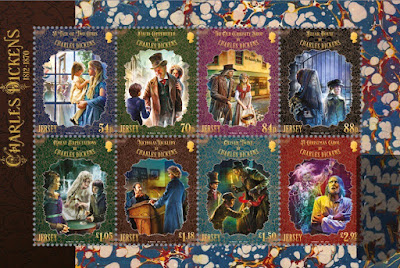 🇲🇻 Recently for sale on an Internet auction site was a set of 4 stamps which do not appear in the Stanley Gibbons Indian Ocean Catalogue (I have the 2016 edition and I cannot say if they have been listed since) from the Maldives postal service which date back to 1995. The set commemorates the holding of the Fourth World Conference On Women in Beijing between 4 and 15 September 1995. A number of locally relevant stamps were released in this style by Maldives around this time and so it may be that this set has just been overlooked or was not actually released at post offices. Either way the set is of some interest. 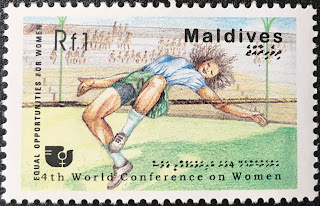 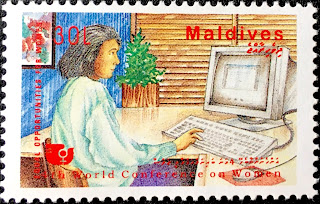 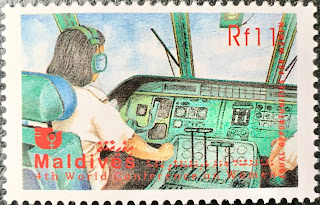 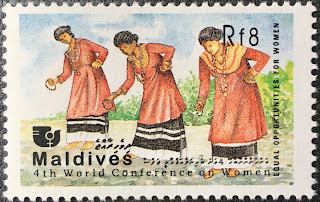 The conference was also commemorated by the postal service of Pakistan by a strip of 4 se-tenant stamps as depicted below:- 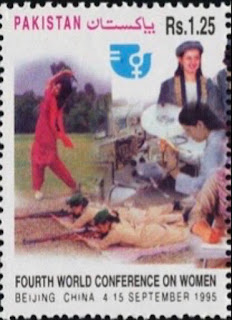 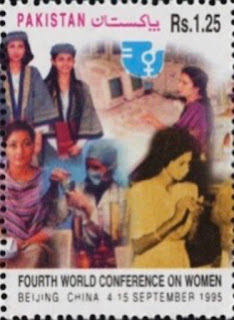 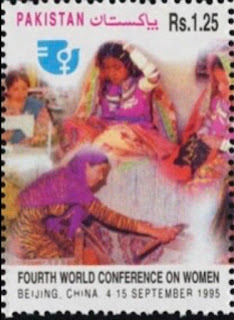 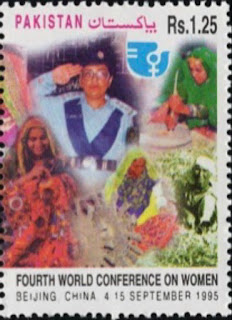 🇬🇧 Today, 29 April, an envelope popped through my letterbox with the Royal Mail postmark commemorating the 100th Birthday of Captain Tom (see Blo ) cancelling the stamp on it. His actual birthday is 30 April and so it would be very pleasing to have a cover with the postmark applied on that particular date. It may look like a slightly scruffy little used envelope but it is a real piece of history and as the story of the pandemic unfolds this is one little part of that story. Unfortunately the part of the cancellation which identifies where the postmark was applied is not legible.

Addendum Reply to Gene’s comment (see below). Thank you, Gene, for that helpful information.