🇮🇲 The Isle Of Man Post Office has used its 8 #Carry Us Through stamps as a basis for a postage paid post card which it delivered to all homes in the island during the week beginning Monday 11 May 2020 which “can be used to send a message to anyone anywhere in the world, completely free of charge, courtesy of IOMPO”. The postcard was delivered along with a leaflet which provides information about the recently formed Manx Solidarity Fund.
Unfortunately I have not seen an illustration of the reverse of the card and so I do not know if it has a ‘stamp’ printed at the upper right.

🇯🇪 Up until now I have overlooked a similar item which Jersey Post distributed to homes in the island and which could be used throughout April 2020. The card is part of Jersey Post’s Connecting Jersey campaign “to encourage people to stay in touch during the Coronavirus pandemic”. Publicity stated that, “...with so many people working hard to keep Jersey moving, fed, cared for, and safe, the postcards will be a way to thank those individuals”.
The obverse of the card has an illustration saying ”THANK YOU” in white lettering on a rainbow-coloured background and on the obverse is a printed ‘stamp’ depicting a rainbow with the Queen’s head at the upper right, ‘JERSEY’ at the upper left and ‘FREE’ below the rainbow. 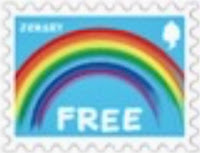 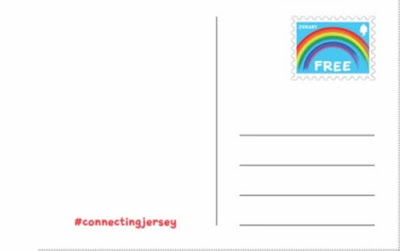 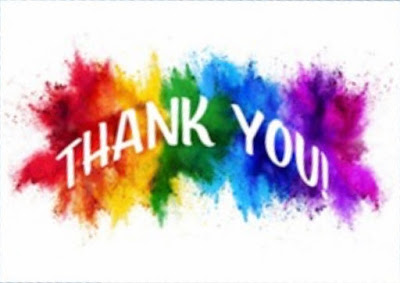 🇱🇰 The COVID-19 stamp which was mentioned in a previous Blog and which was claimed to be expected to be released by the postal service of Sri Lanka during April 2020 is reported to have been a hoax perpetrated by a local philatelic dealer.

🇲🇾 Pos Malaysia issued a personalised My Stamp-type sheetlet (Setem ku) containing 10 stamps (in three different designs) on 13 May in relation to the Aidil Fitri celebration. The item is sold for a premium price of RM25 even though the total face value is only RM6. 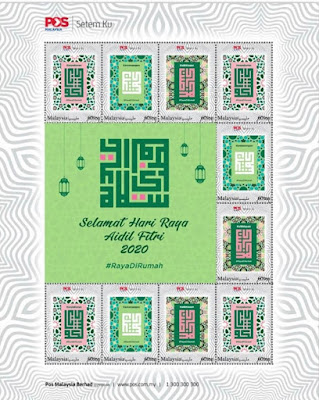