🇬🇧 Following my piece about the postbox which has been painted ‘NHS blue’ by Royal Mail in the village of Marston Mortaine in Bedfordshire to commemorate the 100th birthday of Hon Colonel Thomas Moore who has raised £32 million for a fund for Health Service workers (see Blog 1655) there is more exciting news for we postbox tourists (if only we could travel to see them) - Royal Mail has announced that five more postboxes spread around The United Kingdom have received similar treatment to honour the workers of the NHS.
So far so good. But the road to hell is paved with good intentions. Or, alternatively, the best laid plans of mice and man.....
Each country of The United Kingdom has had a postbox painted outside a hospital treating COVID-19 patients in its respective capital - St Thomas’ Hospital in London, The University Hospital Of Wales in Cardiff, The Royal Victoria Hospital in Belfast and a hospital in Edinburgh. Unfortunately the postbox chosen to be painted in Edinburgh was near the wrong hospital - a psychiatric hospital, the Royal Edinburgh Hospital, rather than the correct hospital located four miles away, the Edinburgh Royal Infirmary (ERI). Let us hope that Royal Mail does not mix up the post that should be delivered to the two hospitals quite so easily. Royal Mail has now stated that it will paint a second postbox in Edinburgh close to the ERI.
A further problem with the Edinburgh postbox is that the wrong logo was applied to the postbox - that of the English National Health Service rather than the logo which represents the Scottish NHS. Finally there have been claims that the “wrong blue” has been used with which to paint the boxes. The English NHS website describes the logo and does indeed give a precise definition of the shade of blue to be used in the logo so the viewer can study photographs of the postboxes and the logo to decide whether or not Royal Mail really did use ‘NHS Blue’. To be honest, until these past few days I did not even know that there was an ‘NHS blue’. The Scottish logo is more complicated since it uses two shades of blue.
Wouldn’t it have been easier, after all, just to design, print, market and distribute a stamp issue? 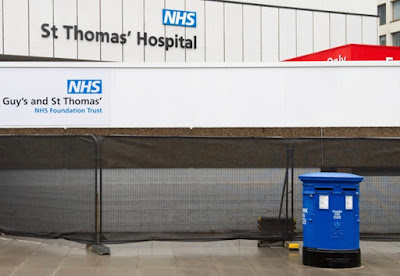 Things are even more complicated since the photograph of the Cardiff postbox clearly shows that the English NHS logo has been used on it while the Welsh NHS has its own logo which is bilingual. I haven’t seen complaints yet but it is hard to feel that they won’t be far behind.

Finally Northern Ireland’s publicly provided health care comes from an organisation called HSC Health and Social Care which again has its own logo.

Royal Mail surely has a right to ask “How can something as simple as painting 4 postboxes be so complicated?”.

Back to England because Royal Mail has included a fifth box in the list of those which have received these ‘Thank you’ messages. The final box is located in Moorside Road at Trafford General Hospital in north-west England which is said to have been the first NHS hospital because, when it was known as Park Hospital, it was visited by the Health Minister on 5 July 1948 who ceremonially received the keys to the hospital from Lancashire County Council.


Addendum:- Reply to Norvic’s comment below:- Thank you Ian. So not ‘NHS blue’ at all then, just ‘Second-hand blue’.