🇮🇲 The postal service of Isle Of Man will issue a set of 6 stamps and 1 miniature sheet on 6 February 2016 to commemorate the 65th (sapphire) anniversary of the accession of Queen Elizabeth II. The stamps which are quite interesting depict The Queen on various overseas trips she has carried out including her visit to The Isle Of Man in 1979. The miniature sheet is on the subject of gifts made to The Queen and the single stamp contained in the sheet depicts the presentation to The Queen of a horse called Burmese by the Royal Mounted Canadian Police. The entire issue was designed by True North and lithographed by Lowe-Martin and perforated 14. Rating:- ***.

The next issue from the Isle Of Man postal service will be released on 13 February 2017 to commemorate the 150th anniversary of the first Manx general election to choose members of The House Of Keys, the Manx parliament. This seems like an interesting issue commemorating a worthwhile anniversary. The issue is made up of 4 stamps and was designed by EJC Design and lithographed by Lowe-Martin and perforated 14. Rating:- ****. 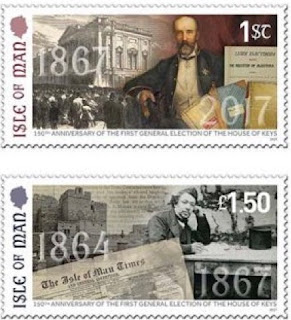 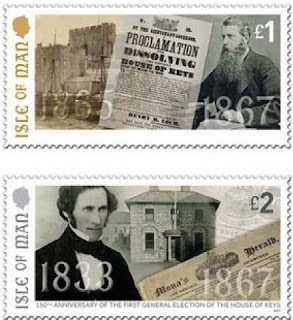 🇬🇬 While the Isle Of Man postal service has got off to an excellent start in 2017 with its interesting and locally relevant new issues, the same can not be said for Guernsey Post which has released 6 stamps and 1 miniature sheet on the subject of the Chinese New Year, which really has no relevance to Guernsey, and additionally a gold foil miniature sheet reproducing the ordinary miniature sheet has also been released in a limited edition of 200 which Guernsey Post seems to think to be a reason for pricing the item at £95. Rating:- 0. 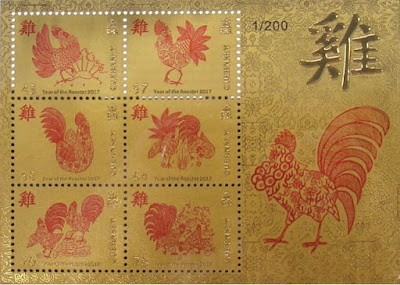 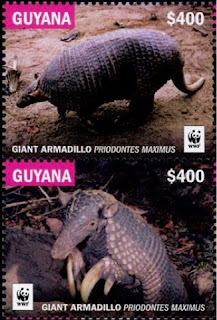 🇬🇾 IGPC released an issue on 17 November 2016 in the name of Guyana which was on the subject of the World Wildlife Fund and depicting the Giant armadillo. The issue was made up of 4 different stamps printed in se-tenant strips as part of a sheetlet of 16 and there was also a miniature sheet containing 8 stamps (2 x 4 different values). The issue was designed by IGPC stamp department. Rating:- ***. 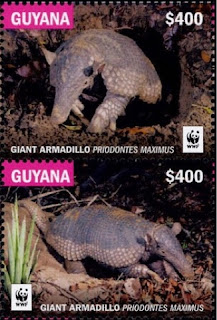 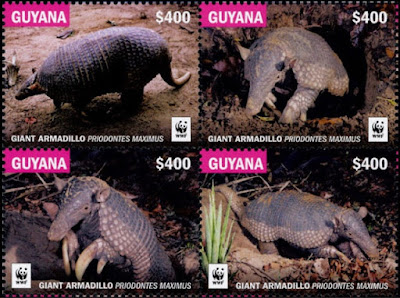 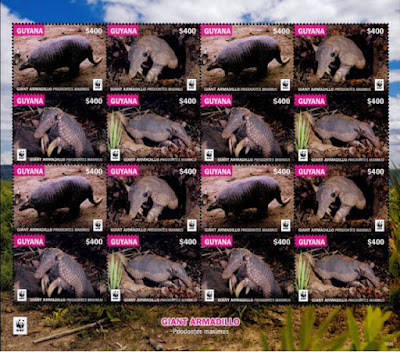 🇬🇮 Royal Gibraltar Post Office/Gibraltar Stamps will issue 2 x £2 stamps in a se-tenant pair to commemorate the lunar new year, "Year of the Rooster" on 30 January 2017. The stamps were designed by Stephen Perera with credits for the illustration being given to cbsjena and siewhoong at I.stockphoto.com. The issue was lithographed by Cartor.
There will be some lunar new year celebrations in Gibraltar this year but the issue is still pretty irrelevant to the territory. Rating:- 0. 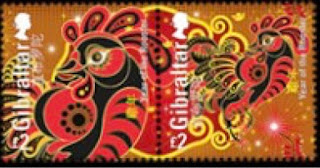