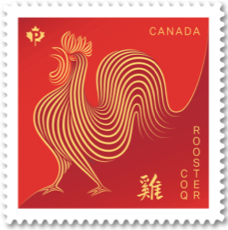 🇨🇦 Canada Post will issue a number of items on 9 January 2017 to commemorate the lunar new year and this year being the Year of The Rooster, the various products are covered with chickens. There will be a single "P" domestic rate value in gummed form from a sheet of 25 and a self-adhesive version from booklets of 10, a self-adhesive $2.50c stamp from booklets of 6 (3 x tete beche pairs), a gummed miniature sheet containing the $2.50c value and, for good measure, another miniature sheet containing 1 each of the $2.50c values and one of the Year of The Monkey stamps of 2016.
The issue was designed by Paprika with calligraphy by Albert Ng. Rating:- **. The problem with this issue is that it is similar to the lunar new year issues released in other recent years and frankly, it just isn't that interesting. 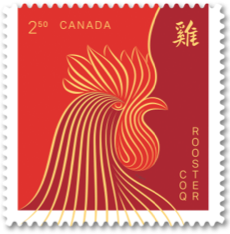 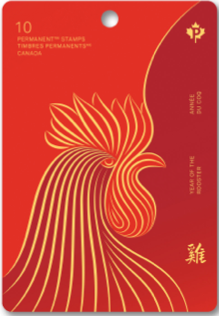 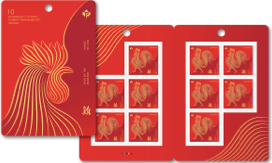 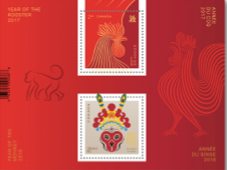 Following soon after the lunar new year issue will be another issue similar to recent releases from Canada Post. A booklet of 10 (2 x 5) self-adhesive stamps will be issued on 16 January 2017 in the UNESCO World Heritage site series - scenes featured are:- Dinosaur Provincial Park, Alberta, Mistaken Point in Newfoundland, Historic district of Old Quebec, L'Anse aux Meadows National Historic site in Newfoundland and Red Bay Basque whaling station in Newfoundland.
It's good to see that 3 of the 5 stamps feature scenes in Newfoundland which has its own unique philatelic history and I will be pleased to add some new items featuring the province to my collection. Sadly, the set as a whole is a little boring as we have had a number of such issues already. At least we've seen the back of the never-ending "Haunted Canada", "Canadian photography" and "Hockey legends" issues and we can look forward to some new subjects making an appearance on Canadian stamps.
In addition to the self-adhesive booklet stamps there will also be the inevitable gummed miniature sheet to accompany the issue. Oh! And there will also be a booklet of 30 stamps (6 x 5 self-adhesive) sold for $25.50c. Rating:- ***.