906. High Noon In The Gambia...Somewhat Delayed.

🇬🇲 On 19 January 2017 Senegalese forces crossed its border with The Gambia as part of the action which was underway to remove the Gambian tyrant, Yahya Jammeh, who had withdrawn the country from The Commonwealth which he called "a neo-colonialist institution" on 3 October 2013 (see Blog 310). Jammeh had lost the Presidential election held at the end of 2016 to Adama Barrow and after accepting the election result then changed his mind and stated that he would not leave office.
Despite efforts by other West African leaders to persuade him to step down and the refusal by the leader of The Gambia's armed forces to take military action in support of him, Jammeh insisted that he was staying in power even after the swearing in of President Barrow in the embassy of The Gambia in the Senegalese capital.
Senegalese forces halted their advance towards Banjul until noon on 20 January to give Jammeh one last opportunity to step down. Two Presidents of other West African states - Guinea and Mauritania - arrived in Banjul to persuade Jammeh to step down and if not, to warn him that he would be removed from office by the ECOWAS forces. Jammeh requested that the deadline be extended to 4PM but it took until late evening before he finally agreed to leaving the country.
It was not until a day later, the late evening of 21 January, when Jammeh left The Gambia for exile in Guinea and The Gambia and West Africa were able to heave a sigh of relief that he was finally yesterday's news and that his removal had gone off with no accompanying violence - unlike the handover of power in Washington where President Trump's inauguration had taken place amid violence and rioting. A pause for thought, I think.
The current events in The Gambia are of interest to collectors of Commonwealth stamps since President Barrow has said that he hopes that his country will rejoin The Commonwealth when he takes power. In an interview after his swearing in he is quoted as saying, "There is a strong tie with Britain and Gambia if you recall history. They colonised Gambia and we are part of The Commonwealth and we will return to The Commonwealth again."
Let us hope that a new government, with many serious problems to deal with, might find time to appoint a new philatelic agency to provide it with new stamps and philatelic services providing, of course that it is not Stamperija! 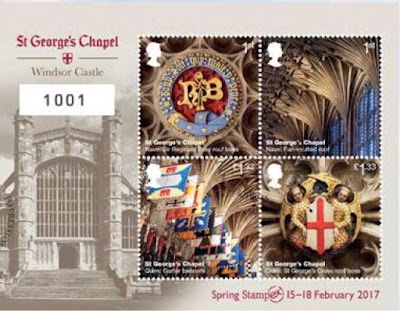 🇸🇭 The Tristan Da Cunha postal service will issue an interesting and excellent set of stamps and miniature sheet on 24 January 2017 to commemorate the 60th anniversary of the visit of The Duke of Edinburgh to Tristan. The set, designed by Bee Design, is made up of 6 stamps which are in 3 se-tenant pairs and includes some lovely paintings by Edward Seago (paired with a black and white photograph). The set was lithographed by Cartor and perforated 13.5. Rating:- *****. 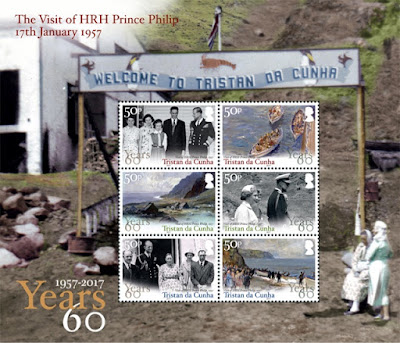 🇬🇬 Guernsey Post's next Post and Go issue will be released on 15 February 2017 and will feature 6 excellent designs which depict local lighthouses. The issue will be sold at Spring Stampex 2016 where, as usual, they will not have any validity for postage but I will be keen to obtain the issue as dispensed from the kiosk operating in Guernsey itself at Envoy House. Rating:- *****. 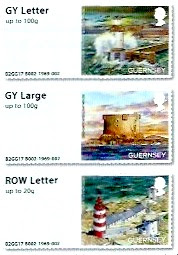 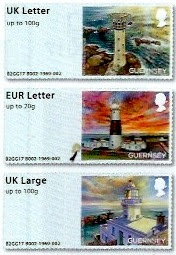 🇯🇪 in Blog 900 I wrote about and included illustrations of the Jersey Post Post and Go stamps which will be issued on 15 February 2017 and are on the subject of shells. They will be vended at Spring Stampex from kiosk JE01 in addition to "Jersey Flag" labels with an additional inscription on them, "HM The Queen Accession 1952". The Shells stamps will also be vended from kiosk JE02 in the Main Post Office in Broad Street in St Helier and from the Philatelic Bureau in the form of "back office" kiosk-dispensed labels from BO02. Rating:- 0.

🇧🇧 In Blog 883 I highlighted the Barbados postal service's marvellous "Centenarians" set which included a miniature sheet of 7 different stamps. In the Comment section of Blog 883 Roddy Somerville pointed out that the miniature sheet illustrated in the Blog was different from the sheet which he had obtained in that the inscription "Centenarians of Barbados" appeared in all 4 margins of his miniature sheet and furthermore the 2nd stamp was missing the country name. I hurried to look at the sheet in my collection and found that it was the same as that described by Roddy Somerville - the missing "Barbados" from Stamp 2 is astonishing. I presume that all the issued sheets have the missing "Barbados" inscription unlike the sheet illustrated in Blog 883 which has the correct inscription even though it was only an illustration provided for publicity purposes.