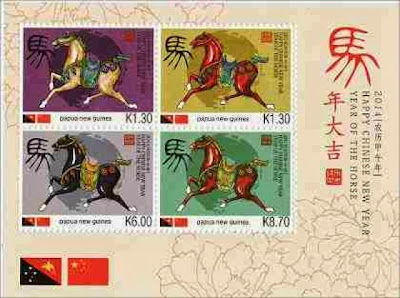 Papua New Guinea's first issue of 2014 was released on 2 January and consisted of 4 stamps, 1 sheetlet of 4 different stamps and 1 single stamp miniature sheet all on the subject of The Year of The Horse. All the stamps and the edges of the sheetlet and m.s. have depictions of the national flags of Papua New Guinea and The People's Republic Of China and I wonder if this is yet another one of those issues which has been donated by China to a state where the stamps are used as a means of advertising friendly links between the 2 countries. I really doubt that Chinese New Year is an important event in Papua New Guinea so I shall not be adding these items to my Papua New Guinea collection. 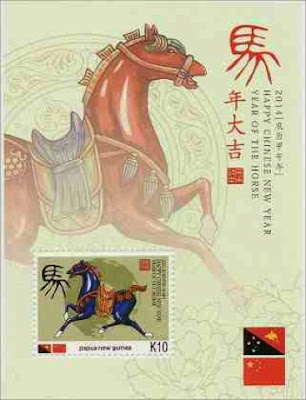 New Zealand will issue 2 stamps on 7 April 2014 to commemorate the Royal Visit of The Duke and Duchess Of Cambridge with their young son, Prince George Of Cambridge, to New Zealand. Both of the stamps depict the young family, the 70c using a photograph taken by the Duchess' father which has previously been used by Canada on a stamp which commemorated Prince George's birth while the $2.40 value shows a photograph taken at the Prince's Christening. The stamps were designed by Stamps and Collectables, Wellington and lithographed by Southern Colour Print:- 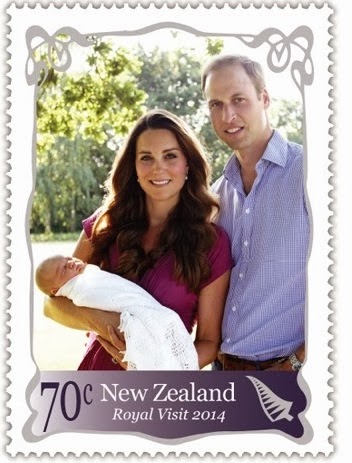 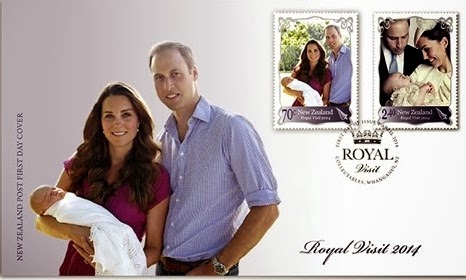 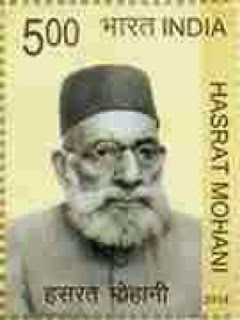 India issued a single stamp on 25 February 2014 which commemorates the poet and politician Maulana Hasrat Mohani (depicted above).
Contrary to what I assumed in Blog 371, some of the Kenyan 50th anniversary of Independence stamps have indeed been issued in large sheets of 25 different stamps. One sheet appears to depict historical events and consists of 25 x 30/- stamps (total face value of £5.19p). This is being offered on an Internet auction site for €99 (£81.66p) which is almost 16 times the face value - whether or not this represents extreme rarity of this sheet I have no idea but it is rather worrying. 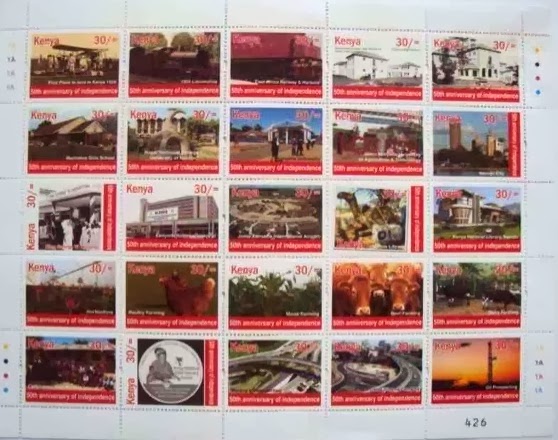 The second sheet of 50 stamps consists of designs which feature Kenyan wildlife and natural scenery. All the stamps have a face value of 110/- which means that the total face value of the sheet is 5500/- or £19.03. This sheet is being offered for €130 (£107.23p) by the same seller which is 5.63 times the face value. I do not think that I want to pay almost £200 for what amounts to only half of this set so I shall sit back and see what happens with the prices when other sellers are offering these stamps. 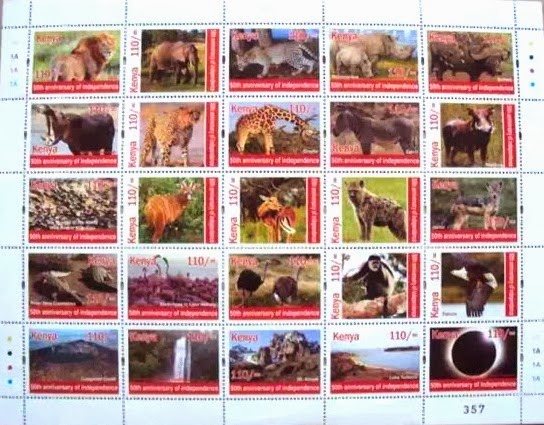 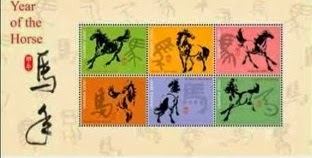 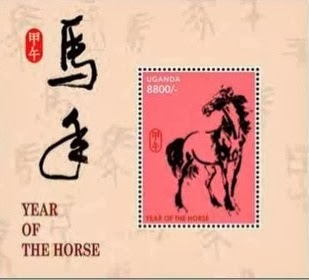 Elsewhere in East Africa, yet more philatelic items have been produced in the name of Uganda by its New York-based agents (as opposed to its Lithuanian agents and Bahrain-based stamp printers). For some reason (probably all related to the expectation of appealing to the Chinese stamp buying market) Uganda has qualified for  2 Year of The Horse issues even though it seems doubtful that the Chinese New Year is an important festival in the country. The first issue consists of 1 sheetlet of 6 different stamps and 1 miniature sheet and the second issue is a sheetlet of 8 x 2 different stamps:- 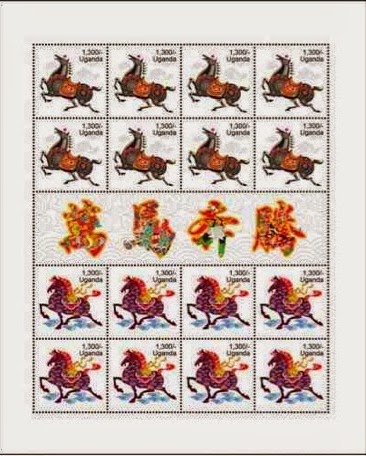 1 sheetlet of 4 different stamps and 1 miniature sheet has been produced on the subject of domestic cats:- 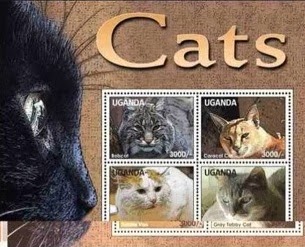 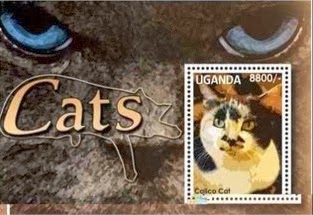 One sheetlet of 4 different stamps and 1 miniature sheet has been produced on the subject of Reptiles of Africa though whether any of the featured reptiles are actually found in Uganda is not clear:- 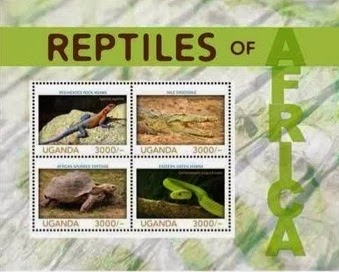 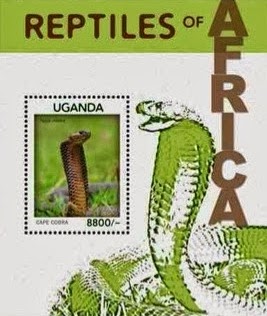 Uganda's New York-based agents also produce philatelic items on behalf of Dominica and again we find them producing a sheetlet of 6 different stamps plus 1 miniature sheet, this time containing 2 more different stamps, on the subject of Chinese New Year even though the Caribbean is a very long way from eastern Asia:- 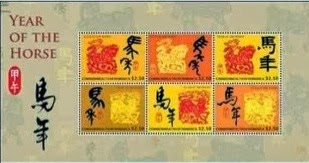 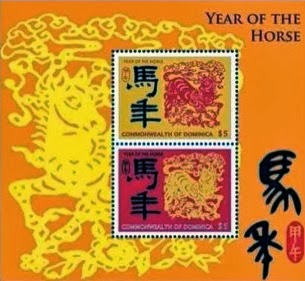 Contrast the indifferent quality of the above designs with the excellent new set of 4 stamps which will be issued by Tristan Da Cunha on 7 April 2014 on the subject of Ships and Explorers. We will not be too surprised to find that the marvellous Explorer stamps have originated from the Pobjoy Stamps/Creative Direction stable whose productions seem to get better and better every time a new set is issued. As I've said before, this particular philatelic agency makes me want to carry on collecting stamps even when I've written a Blog in which many of the featured stamps are very much less worthy and on which I would never think of spending my money. These stamps were designed by Andrew Robinson and lithographed by Cartor. 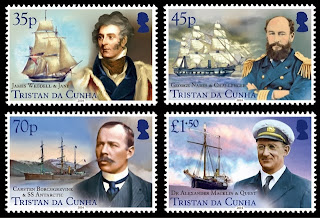 From the same philatelic agency is a set of 4 stamps to be released on 15 April 2014 by The Falkland Islands. The subject of the issue is Fungi of the islands and, in my opinion, the stamps make an interesting, colourful and attractive addition to my Falkland Islands collection:- 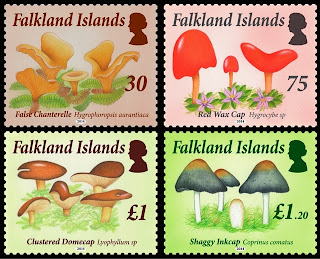