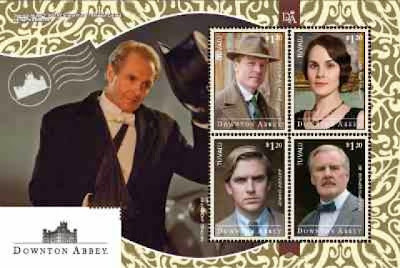 After discussing in Blog 382 the superb and respectful issue commemorating the centenary of the beginning of the First World War which Royal Mail plans to issue later in 2014, news of upcoming Commonwealth new issues sinks to new depths with 2 issues which Tuvalu is said to have issued on 5 March. Firstly, one sheetlet of 4 different "stamps" and 1 miniature sheet have been released which show characters from the British television series, Downton Abbey. It is hard, if not impossible, to see any link between this tiny South Pacific country and the fictional carryings on at the home of Lord Grantham but there we go; doubtless Tuvalu's philatelic agents see huge profits to be made by selling such items related to this programme which seems to be very popular with television watchers around the world. 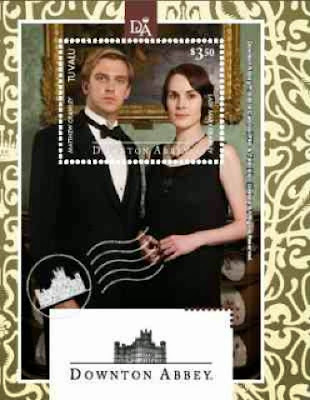 Even worse is a sheetlet of 6 different "stamps" and 1 miniature sheet which have been produced to mark the World War I centennial and said to have also had a date of issue on 5 March 2014. Although the Gilbert And Ellice Islands, of which modern day Tuvalu was a part, were part of the British Empire, all the designs of this set shows scenes related to the American entry into the First World War which did not happen until 1917 and clearly they do nothing to show respect to any Ellice Islanders who may have been involved in the British Imperial forces. In fact 25 members of the Gilbert Islands native police force fought in the war (I presume this would have included Ellice Islanders) and I feel it is a great pity that this set was clearly produced to sell in The United States and is lacking in respect for the people of the country whose name appears on these "stamps". Needless to say I will not be adding either of these sets to my collection of Tuvalu stamps. 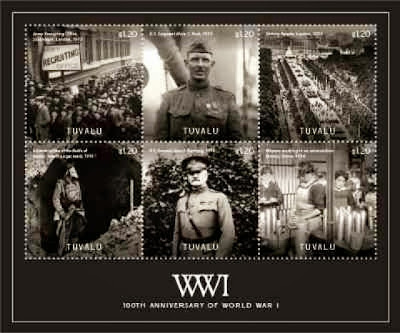 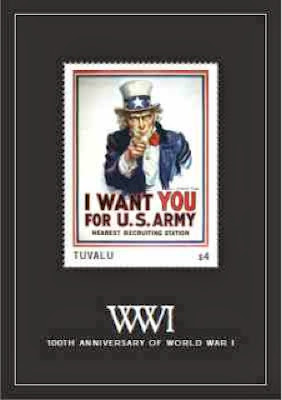 Moving from the South Pacific to the Irish Sea, Isle Of Man has announced that it will issue 16 new stamps (10 gummed and 6 self-adhesive) on 4 April 2014 to commemorate the 150th birth anniversary of Archibald Knox who was born at Cronkbourne near Tromode in the Isle of Man on 9 April 1864. Knox was a designer of art nouveau items and 10 of his products are featured on the stamps that make up the set. The self-adhesive stamps are sold in a booklet which has 2 each of the six 42p stamps and costs £5.04p. The stamps were designed by EJC Design and lithographed by LM Group:- 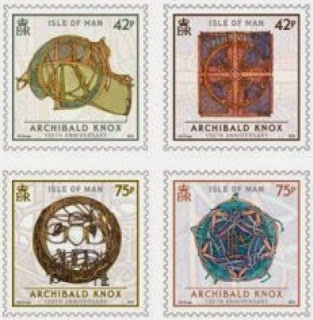 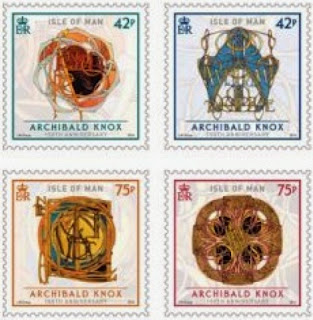