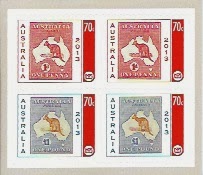 I have just received the pack of 2013 Personalised stamps produced by New Zealand Post and I find that  it contains a total of 45 different stamps including 5 different stamps produced in a booklet of 10 (2 of each design) which were produced to commemorate the Australia 2013 Philatelic Exhibition and which depict the Exhibition logo and venue as well as reproductions of Australia's first stamp issue, the kangaroo and map stamps. How interesting it is to see these stamps depicted on a New Zealand issue:-

Two blocks of se-tenant stamps were produced - one of 21 self-adhesive stamps and the other containing 19 gummed stamps:- 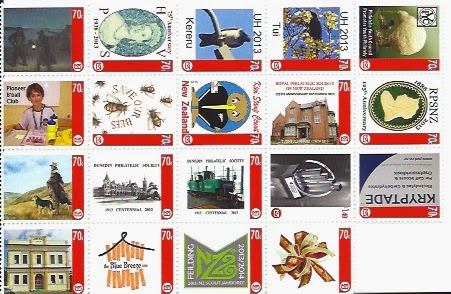 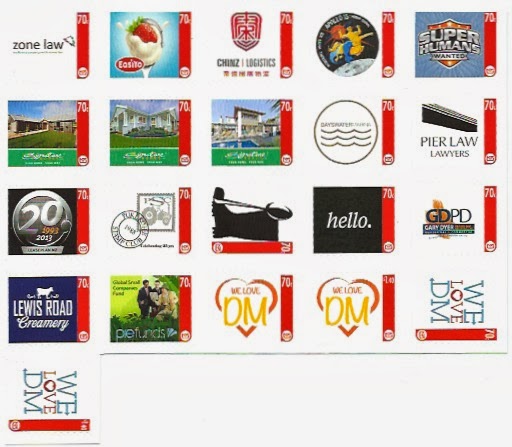 I particularly like the stamp which depicts what I take to be a painting of a shepherd and his dog. The stamp doesn't give any explanation of its design and purpose and as can be seen many of the other designs pictured above are similarly, er, enigmatic.

Two stamps featuring birds should be popular with collectors of birds on stamps although I can't imagine that they will be too pleased to have to buy the complete pack just to obtain the 2 stamps relevant to their theme:-

The current "Big Thing" in British stamp collecting continues to be the "Post And Go" machine-printed stamps. In Blog 367 I mentioned that I had given up collecting such items issued only at philatelic exhibitions since they are not freely available to the general public for use on mail and as such are really nothing more than exhibition souvenirs rather than being true postage stamps. The Norvic Stamps Blog continues to be the best source of information about the Post And Go many headed hydras and a recent edition of that Blog draws attention to the introduction of a new type of machine for the printing of Post and Go stamps which means that we now have a whole new set of varieties of the basic Machin Head designs.
Importantly, however, these new types are from machines set up in a proper post office rather than at a stamp exhibition and are therefore freely available to the ordinary mail-sending population who wish to use these stamps on their ordinary mail and therefore these are true postage stamps rather than being souvenirs from exhibitions or museums and therefore they deserve a place in my collection of British stamps. The Norvic Blog records that these NCR machines are shorter and wider than the Wincor-Nixdorf machines currently in use in most post offices which have Post And Go facilities.
The first post office in which the new machines have been installed is in the Crown Post Office in Harpenden in Hertfordshire and the first day of operation was 28 February 2014. A collector's strip of 6 different values is available printed on the Machin Head design as well 2 types of 2nd class blue Machin Head stamps (2nd and 2nd large). Further varieties arise because the machines print what has been termed "open value" stamps which show the weight and destination of the letter which is to be posted and which look very different from the basic stamps:- 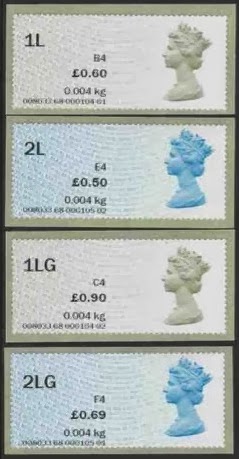 I received one of the open value stamps on cover. As can be seen from the illustration of the stamp below this is the 1st class rate and the slightly blurred postmark (it was raining on the day of delivery and the postman must have had the cover exposed at the top of his pile of mail) can be read as originating from Harpenden and seems to be dated 28 February 2014, the first day of the use of the NCR kiosks:-

Having decided firmly that I would omit exhibition and museum"post and go" souvenir items from my collection, I still feel it necessary to mention just what is appearing in this category if only to make the point that Royal Mail is making the most of these money spinners while people are still prepared to keep spending money on them (surely these items are being exploited beyond the collector's tolerance so that sales will soon fall over a cliff edge).
From what I can deduce from the excellent information on the Norvic Stamps Blog, because of the introduction of new style "B "machines used alongside the old machines, the Spring Stampex Exhibition brought us 54 new Post And Go stamps - the Machin Head design with "Spring Stampex 19  - 22 February" inscription with MA13 date code and no date code plus the same from the B machines, the Union Jack stamp with no additional inscription with MA13 date code from A and B machines plus the Union Jack with no date code from A machine (which I presume was produced at previous exhibitions), the Spring Blooms set from A and B machines and an "error" which read "Stampex Spring..." rather than "Spring Stampex..." (depicted below) on the Machin Head with MA13 from an A machine. The face value of this little lot amounts to £57.78 and clearly to buy every item at face value would have involved being present at the exhibition almost continuously to ensure that one was available to buy the change of stamps when they occurred (especially the "Stampex Spring" "error").

Doubtless there are some collectors who continue to find the collection of these items to be challenging, exhilarating and rewarding but Royal Mail's Spring Stampex shenanigans must surely have put off crowds of people who have previously found the collection of Post and Go's to be interesting and enjoyable. The publicly accessible machines in ordinary post offices of course dispense genuinely postally relevant stamps and I will continue to add them to my collection but I think that through sheer opportunist greed the exhibition souvenir Post and Go golden goose was put to death by Spring Stampex 2014.