Steven Zirinsky has recently offered for sale an interesting cover from The Solomon Islands from 2010 with a 65c stamp of the Health Campaign set which was issued in 1991 affixed to it. The cover also bears an 85c value of the 1994 set which featured dolphins and is cancelled "GENERAL POST OFFICE" dated "16. 03 (or 08) 10". The cover is interesting because the 65c had not been issued officially but clearly in this case it had found its way to the post office counter. 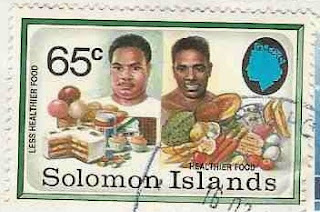 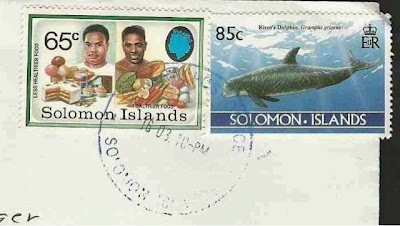 A number of examples of the unused stamp can be found offered for sale but an example used on cover seems to be rather unusual:- 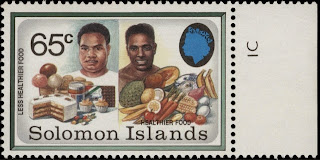 Elsewhere in the Pacific Ocean area, the first stamp issue of 2014 from Tuvalu will be a set of stamps on the subject of vegetables which will be released on 23 April. Further details of the set are awaited.

Further to Blog 379, I include some more illustrations of Footnote issues produced recently by a large New York-based philatelic agency on behalf of various Commonwealth territories - 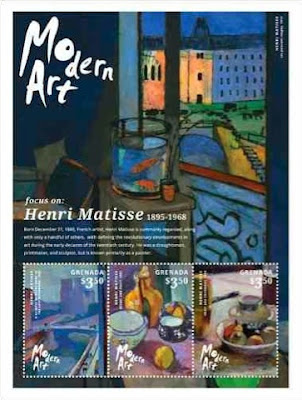 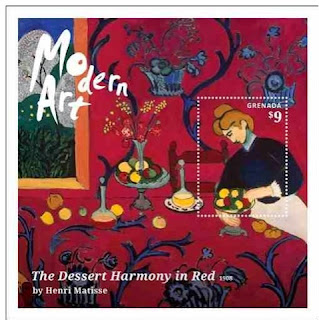 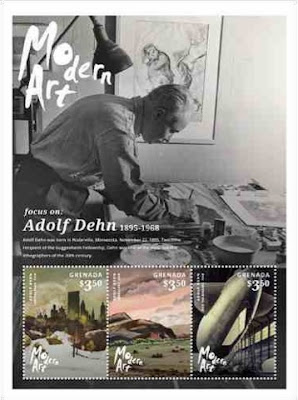 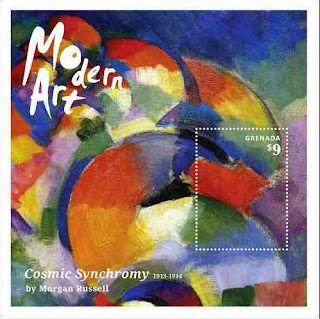 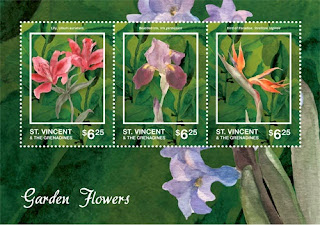 Sierra Leone - 17 September 2013 - Parrots of Africa - 1 additional sheetlet of 4 different stamps depicting lovebirds (the additional miniature sheet was illustrated in Blog 379). It seems bizarre that the 4 species depicted in the sheetlet are NOT found in Sierra Leone while the only species of lovebird to be found in the country, the red-headed lovebird, is not actually included in the set at all. One suspects it is just a matter of laziness so that the person deciding what to feature on the stamps could not be bothered to find out which species actually occur in Sierra Leone (though it's pretty simple to google "Birds of Sierra Leone" and see what wikipedia says on the subject). I suppose the producers of these items rely on the thought that some stamp collectors will just buy anything if it's related to the theme in which they are interested. Sometimes I can imagine certain agency bosses having a good laugh at the poor saps who are prepared to spend lots of money on some of this stuff - yes, laughing all the way to the bank:- 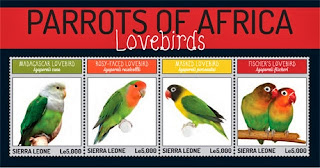 In Blog 366 I mentioned the other sheetlet and miniature sheet issued as part of this set and I repeat the illustrations below to point out that the African Grey Parrot and the Senegal Parrot actually are both species which are found in Sierra Leone although the other 3 species are from elsewhere. No doubt someone would argue that 2 out of 10 isn't bad. But Wikipedia tells us that Sierra Leone has 669 species of birds within its borders so it would not have been difficult for the philatelic agency to produce a set of Sierra Leone birds rather than depicting some which live very large distances from the country. The face value of the set, Le72,000, is equivalent to £7.23p and so by the time any collector has paid the stamp dealer's costs and profit as well as any purchase taxes, the set will probably cost more than £12 so the purchaser has the right to expect that the producer has put a little thought into making it a meaningful issue. 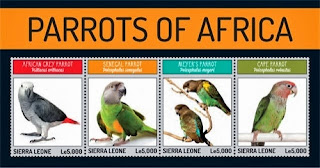 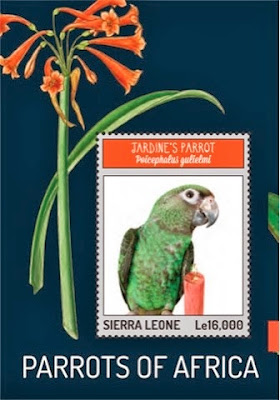