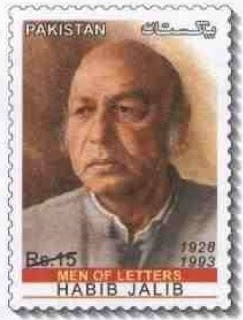 Pakistan's first stamp issue of 2014 was released on 12 March and was the latest stamp to appear in its "Men of Letters" series. The stamp commemorates Habib Jalib and was designed by Adil Salahuddin and lithographed by Pakistan Security Printing Corporation of Karachi. Jalib was born on 28 March 1928 and became a revolutionary poet and left wing activist and politician. 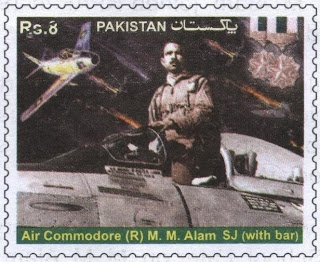 A stamp was then issued on 20 March 2014 which commemorated the late Air Commodore (R) M M Alam. This stamp was also designed by Adil Salahuddin and lithographed by Pakistan Security Printing Corporation (depicted above). Muhammad Mahmoud Alam was a Pakistan Air Force fighter pilot and one star general who was awarded the Sitara-e-Jurat (the Star of Courage) for his actions during the Indo-Pakistan War in which he shot down 5 Indian aircraft in the space of 1 minute. He died on 18 March 2013 aged 77.


Malta issued a set of 4 stamps on 28 March 2014 titled "Maritime Malta Series II" and designed by Cedric Galea Pirotta and lithographed by Printex:- 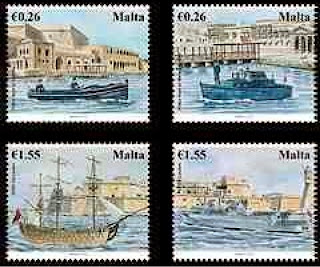 I highlighted the first 2 issues of the year to appear from Tuvalu in Blog 383 and apparently the third issue of 2014 will be a set to be released on 24 March on the subject of "Space" and the next issue after that will feature "Vegetables" and will be released on 23 April.
The next issue from Guernsey will be a set of 6 stamps depicting musical instruments which will be released on 8 May 2014. The stamps and a miniature sheet were designed by The Potting Shed and lithographed by Lowe Martin. The 55p and 63p represent Guernsey's participation for 2014 in the annual EUROPA omnibus:- 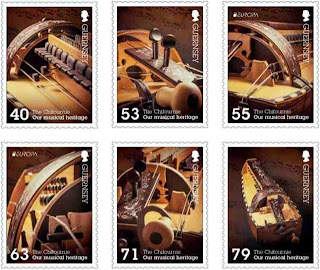 And then a set of 6 stamps will be issued on 28 May 2014 which have a floral theme - the 50th anniversary of "Britain In Bloom". The stamps were designed by Andrew Robinson and lithographed by BDT International:-

Guernsey Post will issue a second set of 6 stamps on 28 May 2014 but with the inscription "Alderney" which depict scenes from a recently produced final panel for the Bayeux Tapestry. The stamps and 1 miniature sheet are designed by Bridget Yabsley and lithographed by Cartor. The miniature sheet has been produced on 100% combed cotton thread:- 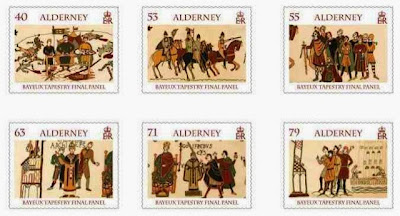 Ireland's An Post issued a single stamp on 20 March 2014 to commemorate the 90th birth anniversary of the playwright, Brendan Behan. The stamp was designed by Conor and David and lithographed by Irish Security Stamp Printing Ltd:- 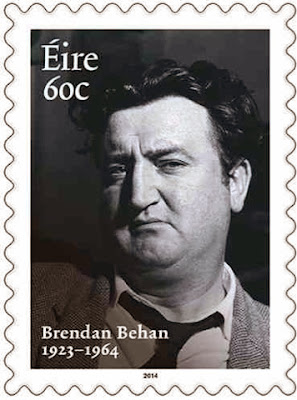 Cyprus issued the 2014 Refugee Relief stamp on 12 March in the usual design but with a "2014" inscription:- 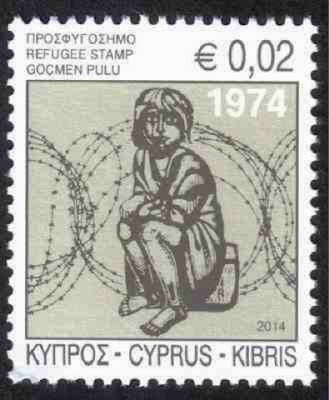 Meanwhile, yet another issue to mention from Grenada Grenadines which has been released in 2014 (precise date not known) on the subject of rocks and minerals:- 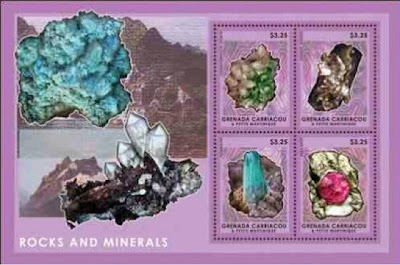 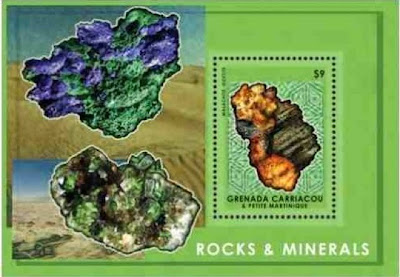 The New York-based philatelic agency responsible for the above Grenada Grenadines items has certainly been busy recently as detailed in Blogs 384, 383, 381 and 379 and now I have illustrations of recent philatelic items it has produced in the name of Tanzania (I do not yet know the dates of issue) -

2014 - Sunbirds of Africa (strangely, South American toucans are depicted in the borders of the sheetlet) 1 Sheetlet of 4 stamps and 1 miniature sheet. I'm not sure how many of these species are actually found in Tanzania - certainly the one depicted on the miniature sheet stamp, the Nile Valley Sunbird, is NOT a species which is found in Tanzania. What is the point of showing species which do not appear in Tanzania when the country apparently has 1108 species within its borders which could be depicted? 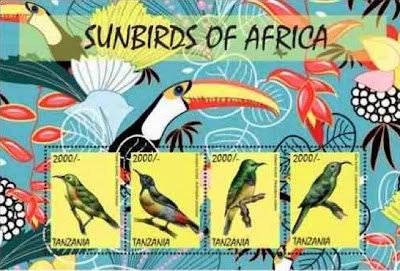 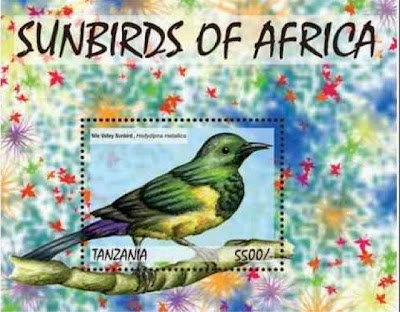 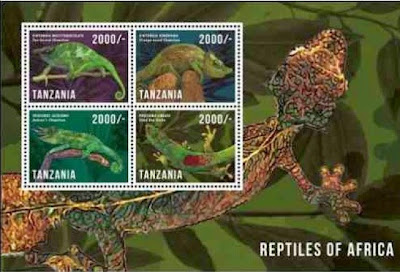 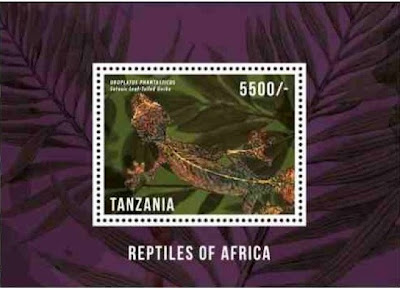 2014 - Breeds of domestic dogs - 2 sheetlets each of 4 different stamps and 2 miniature sheets:- 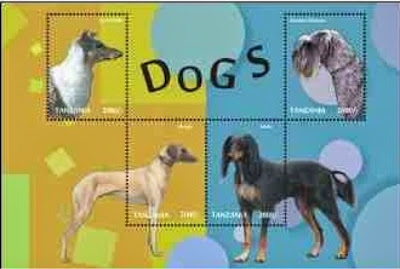 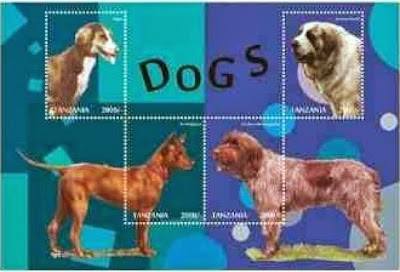 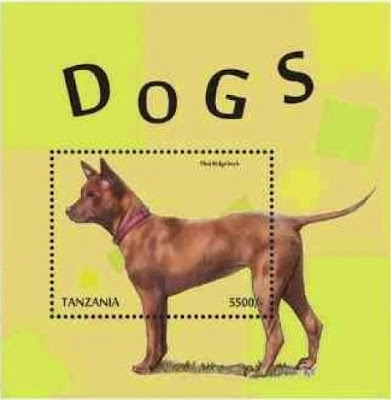 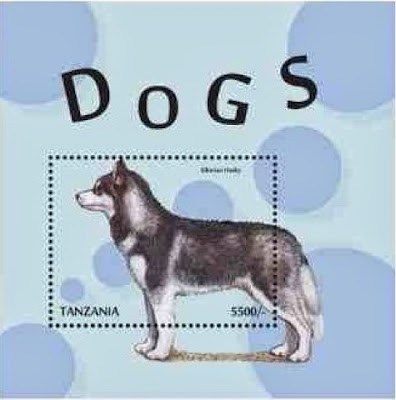 Below are illustrated the excellent set of 6 stamps and 1 miniature sheet issued by Hong Kong China on 20 February 2014 which depict Chinese dinosaurs and which were designed by Keith Yip and Tong Wai-pang and lithographed by Enschede:- 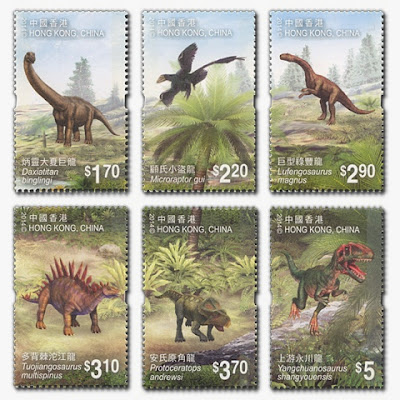 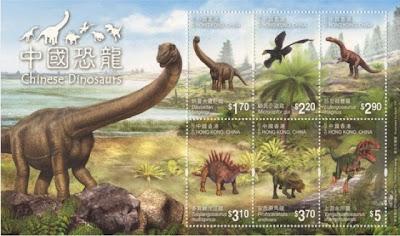 On 24 March 2014 Australia Post will issue a set of 7 gummed stamps, a se-tenant coil strip of 4 x 70c stamps and booklets of 10 x 70c and 20 x 70c stamps (which produces just 4 different stamps) making a total of 15 different new stamps all of which are on the subject of Floral Emblems of Australia's States and Territories. The stamps were designed by Jo Mure and lithographed by McKellar Renown:-

The latest Stamperija products with the name of Mozambique printed on them are said to have been issued on 25 September 2013 and take the form of 15 sheetlets each of 4 different "stamps" and 15 miniature sheets, each subissue on a different subject which are:-
Chinese trains:- 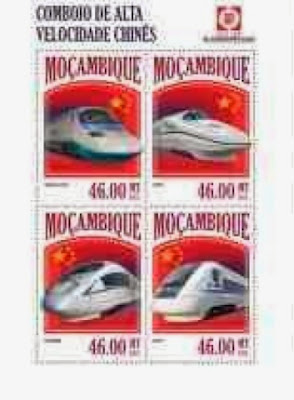 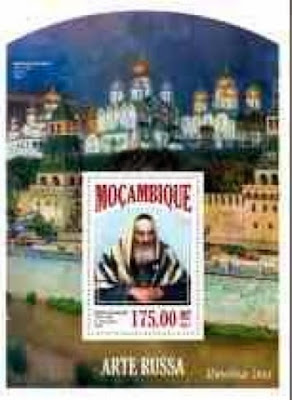 This may well be the last "issue" of 2013 with Mozambique's name  inscribed on it to emanate from this agency during 2013 which means that in all 538 "stamps" and 121 "miniature sheets" making a grand total of 659 philatelic items were issued with the Mozambique Post Office's approval during 2013. Not one of these things will find its way into my Mozambique collection.
Actually, this is the smallest total of philatelic items produced for Mozambique in several years but it still places Mozambique in the number 1 spot in the list of greediest Commonwealth postal administrations of 2013. Perhaps they could boost their new issues figures back up again by touring the world's philatelic exhibitions with a "Post And Go" machine in tow and cash in on that source of inflated philatelic income as the Jersey Post Office is now attempting to do even though there is not a Post And Go machine available for use by the general public in Jeresy itself. Or perhaps, Jersey could just give up producing its own stamps and let Stamperija loose on Jersey collectors and then it could share its machine with Mozambique and everyone would be happy (except the collectors).