Among a new release of Footnote issues from a large New York-based philatelic agency is a sheetlet of 4 different "stamps" and 1 miniature sheet with the name of St. Kitts printed on them. These items commemorate the first manned space flight of the cosmonaut Yuri Gargarin in Vostok 1 on 21 April 1961 (the miniature sheet is inscribed "50 Gargarine" which suggests that it marks the 50th anniversary of the flight but 3 years too late!) and have a date of issue of 19 January 2014.
The stamps feature different portraits of the cosmonaut but the quality of the art is rather poor and the portrait on the left side of the sheetlet appears not to depict the heroic Yuri Gargarin but rather a portrait of the not-so-heroic former British prime minister Anthony Blair grinning toothily out from the sheetlet! Even Blair may never have expected to find himself depicted as a space hero.

Apart from Blair's first recorded trip into outer space on the subject of which he will be delighted to deliver a lecture at the modest price of $500,000, the St.Kitts space issue also includes another sheetlet of 4 stamps on the subject of the exploration of the planet Mars which of course is a subject of vital importance to the mail senders of St. Kitts:- 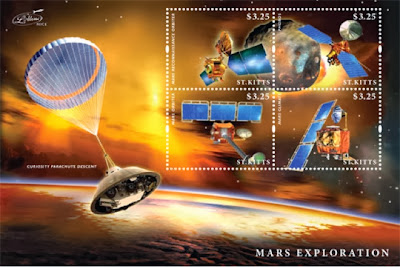 St. Vincent And The Grenadines had an issue prepared for it with a date of issue of 26 February 2014 which is on the subject of "Garden Flowers". The issue includes a miniature sheet which contains 2 different stamps:- 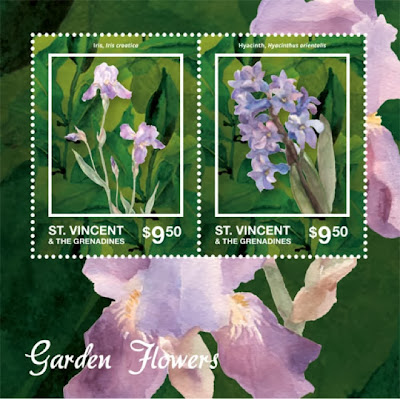 A second miniature sheet in the set "Parrots of Africa" from Sierra Leone was issued on 17 September 2013; I have previously depicted other items from the set. The parrot is NOT found in Sierra Leone or anywhere near it, being endemic to Malawi, Tanzania, Mozambique, Zambia and Zimbabwe and so this miniature sheet has no relevance to Sierra Leone and is therefore relegated to Footnote status:- 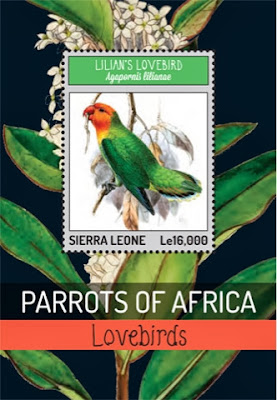