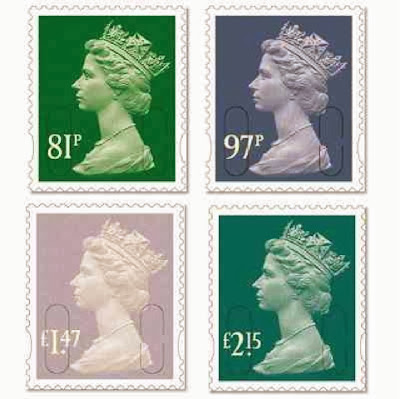 The new values therefore consist of 81p, 97p, £1.47 and £2.15 stamps which are printed in photogravure by De La Rue.
Meanwhile, as described in detail in Blog 347, 10 stamps featuring "Remarkable Britons" will also be issued on 25 March 2014. The set has been lithographed by International Security Printers and designed by "Purpose":- 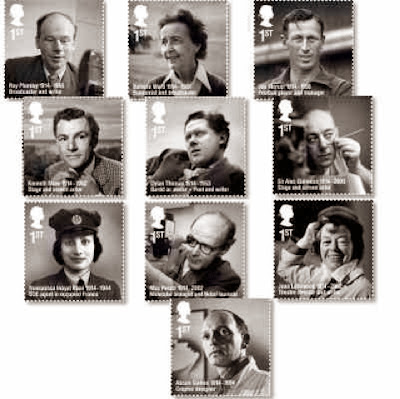 The Norvic Philatelics Blog reports about the latest Post and Go exhibition souvenirs which will be issued at the Scottish Philatelic Societies' Annual Congress in Perth which takes place on 11 and 12 April 2014. Items printed on 2 new B machines will be sold as well as items from the A machines which means that 24 new varieties of Post and Go souvenirs will be produced at the exhibition since both the Union Flag and Machin Head designs  will be used in both types of machines with the exhibition inscription applied to them. These items will only be available at the exhibition with a limited sale of just 2 days so I think of them as exhibition souvenirs rather than postage stamps and I will not be adding any of them to my collection of postage stamps.
We will not be too surprised to find that Jersey Post has also got in on the act and the J001 machine will be present at Perth to produce the Jersey flag items possibly with a Perth Congress inscription. There continues to be no Post And Go machine available for public use in Jersey itself so for the present at least the Jersey Post and Go items can only be viewed as philatelic confections rather than postage stamps and certainly have no place in my collection.
The face value of the 24 new British souvenirs is £29.68p (see Blog 375 for information about the Spring Stampex Royal Mail which points out that the face value of the 54 exhibition souvenirs available there amounted to £57.78p). Surely this can not go on much longer - collectors' enthusiasm for these items is bound to fall away in the face of this onslaught of products.
The Norvic Blog also draws attention to the latest museum souvenirs from the British Postal Museum and Archive (BPMA) where a new Post And Go dispensing machine (A001), supplied by Intelligent AR Ltd, will be operational from 24 March 2014. This will produce new versions of the "The B.P.M.A./Postage Due 1914" inscription on both the Union Jack and Machin Head fast stamps but only until 4 April 2014.
One comment on the blog points out that this may represent the production of not just 12 new BPMA souvenir stamps but with the change in postal rates at the end of March the new rates may be reflected on these items produced by the new machine from 31 March to 4 April and then when the original BPMA inscription is reintroduced on 7 April after the removal of the "Postage Due" commemorative inscription, another 12 new items will be produced because of use of the new machine. It all seems very confusing and very expensive for devotees of "Post And Go" Exhibition and Museum souvenirs.

New Zealand Post will issue 6 stamps and a "miniature sheet booklet" on 2 April 2014 to commemorate the 75th anniversary of the start of the Second World War. The stamps were designed by New Zealand Post Ltd. and lithographed by Southern Colour Print. The designs feature poster art. The price of the booklet is $19.90 and contains 7 panes, 1 of each individual stamp and one which unites all 6 values:- 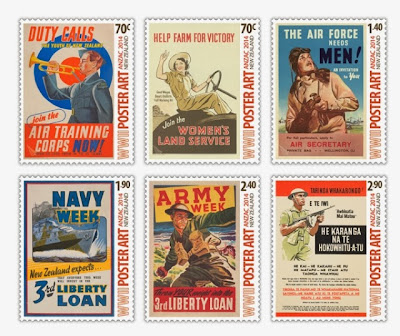 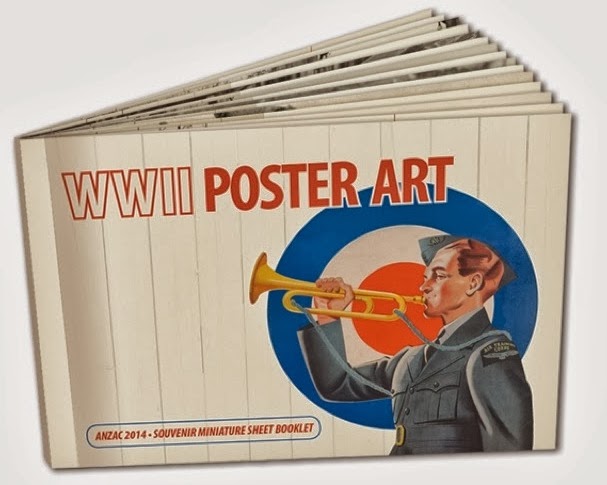 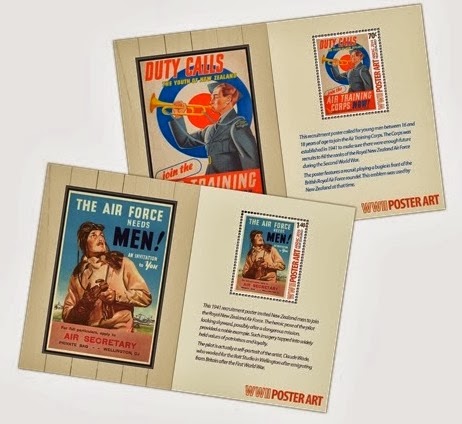 In Blog 369 I mentioned the short-lived 63c baby animal and Queen Elizabeth II definitives from Canada necessitated by a hike in postal rates and depicted below is the booklet of 10 (5 x 2 different stamps) self-adhesive "Pride" definitives which was also issued to meet the needs of the introduction of the 63c domestic mail rate:-