Royal Mail's most important stamp issue of the year will be released in July 2014 when 6 stamps are released to commemorate the centenary of the outbreak of the First World War. In all, a series of 30 stamps will be produced which will appear over the next 5 years and which will cover many aspects of the involvement of Britain and its former empire in the war. Themes of the series will include the role of the armed forces, of civilians and non-combatants, of women, of the countries of the present Commonwealth and of artists including painters and writers.
The first designs depict a poppy (original artwork by Fiona Strickland) and a quotation from the poem "For the Fallen" by Laurence Binyon and a portrait of Private William Tickle who joined the armed forces at the age of 15 on 7 September 1914 shortly after the outbreak of the war and who was killed at the Battle of The Somme in 1916. The first of 3 £1.47 values features the painting "A Star Shell" by CRW Nevinson:-

The second of the three £1.47 stamps depicts a detail of a war memorial located in a public park in Newcastle-Upon-Tyne which shows a scene titled "The Response" by the Welsh artist, Sir William Goscombe John and represents the raising of several companies of The Northumberland Fusiliers with the men joining up in 1914. The final stamp depicts a "Princess Mary gift box" which was presented to everyone wearing the King's uniform and serving abroad for Christmas 1914. The box contained a Christmas card, a photograph of Princess Mary (the daughter of King George V) who had launched the Christmas gift fund and gifts - smokers received a pipe, an ounce of tobacco, a tinder lighter and cigarettes while non-smokers received a packet of sweets and a writing case containing a pencil, writing paper and envelopes.

No family in Great Britain was untouched by the First World War and so this set and series has real meaning to the descendants of the people of the islands who lived through this war even 100 years after it began and so I feel that this is the most important set of stamps which Royal Mail will produce during 2014 and I think it is a job very well done.
Both of my grandfathers fought in France and both lived through the war when many of their comrades died. One of them, Dick White, joined the army in February 1914, several months before the war began. He had only just had his 16th birthday and was actually too young to join the army (like Private Tickle depicted on the 1st class value) but he told the recruiters that he was older than he actually was and so by the outbreak of the war in August 1914 he was a trained soldier. Below is a photograph of him - you can see he was very young - in the uniform of the Royal Warwickshire Regiment, clearly unaware of what lay ahead for the country and himself. He was not sent to France until 1 April 1915 when he was 17 years and 3 months old and his first action was at the Second Battle of Ypres on 22 April 1915. Eventually he was discharged from the army on 17 November 1917 due to injuries caused by severe frostbite acquired in the trenches in France - still only 19 years old with almost 3 years of active service in France behind him.
I have ordered some Smilers stamps with this photograph on the labels so that my personal hero of the War will be philatelically celebrated. Unfortunately I do not have a photograph of my other grandfather, Harry Knight, to do the same with but perhaps I will be able to track one down over the coming months. 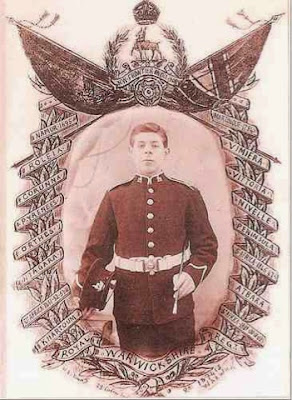