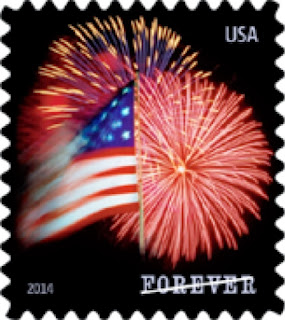 In Europe in 1814, following the three-day Battle Of Leipzig in October 1813 where the anti-Bonaparte allies (Sweden, Russia, Austria and Prussia) had defeated the self-proclaimed "Emperor" and his forces, the toppling tyrant had fled back to and was trapped like a rat in France itself. Meanwhile, the Americans who had taken the opportunity of Britain's preoccupation with Bonaparte to attack Canada also had their backs up against the wall.
In Blog 347, I described the events in late 1813 where the Americans defeated the British at the Battle Of Lake Erie and in so doing prevented a British Invasion of Ohio, Pennsylvania and western New York. The American stamp which commemorated the bicentenary of that battle was illustrated in that Blog.
At sea, the Royal Navy blockaded the American coastline although it allowed trade to carry on between Canada and New England where the inhabitants were more happy to continue profiting from the Canadian trade rather than to support the American cause. The Americans used small gunboats to defend their ports but they proved ineffectual as British ships were able to raid the American ports at will. The most notable raids took place along the Chesapeake coastline and culminated in British forces attacking the American capital and burning down the White House - the only time in history when a foreign power was able to attack Washington and raze the president's home. 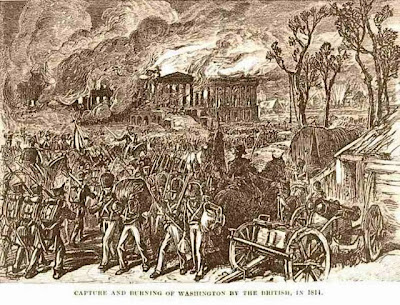 After the burning of Washington, British forces moved on to attack the town of Baltimore which involved an assault on Fort McHenry. On 13 September 1814 British ships bombarded the fort and land forces attacked Baltimore. The British land forces were forced to withdraw by American resistance but the bombardment of Fort McHenry continued through the night. As dawn filled the sky, the defending American General Armistead ordered that the storm banner flying over the fort be replaced by the standard flag and in the first light the flag was clearly visible to the attacking ships. The sight of the flag was evidence of the failure of the British assault and was instrumental in convincing Vice-Admiral Cochrane to withdraw his ships and re-embark the British land forces. The successful defence of Baltimore restored American morale which had been crushed by the burning of Washington.
The United States Postal Service issued a single stamp on 28 January 2014 which commemorates the bicentenary of the "Star Spangled Banner" and depicts the Stars and Stripes which flies over Fort McHenry National Monument and Historic Shrine in Baltimore. The flag is a replica of that which had persuaded the British to withdraw from their attack on Fort McHenry and which had led Francis Scott Key to write his poem "Defence of Fort McHenry". The poem was set to the tune of a British song and became an American patriotic song and eventually was recognised as The United States national anthem in 1931. A stamp will be issued later in the year by the US Postal to commemorate the successful defence of Fort McKinley.
A reminder that, as described in previous blogs, Canada issued 2 sets of stamps, each of 2 values, from 2012 to 2013 which commemorated the role of Canadians and British in the War Of 1812. The blog of 17 March 2012 describes the role of the Shawnee War Chief Tecsumah and the Guernseyman, Major General Isaac Brook, in the events of 1812:-

Blog 220 describes the roles of Laura Secord and Charles de Salaberry in resisting the American invasion and occupation of Canada in 1813:-

Although there does not appear to be a War Of 1812-related issue planned by Canada Post for 2014, perhaps the Canadians will wrap up their philatelic contribution to the story with an issue early in 2015.