372. The Commonwealth And Tibet. 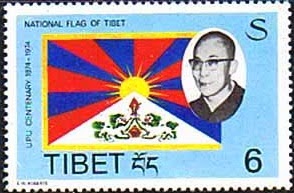 Tibet was incorporated in the Mongol Empire in the mid 13th century but was independent again for almost 4 centuries from the mid 14th century until a Chinese protectorate over the country was established in 1720 and a government was set up in Lhasa in 1721. In the late 1720's the Chinese established a presence at Lhasa in the form of the Ambans  but by the beginning of the 19th century Chinese imperial power in Lhasa was reduced to nothing more than symbolic. Chinese argue that the continuing presence of Ambans in Lhasa demonstrated ongoing Chinese sovereignty while Tibetans take the line that the Ambans were merely ambassadors for China.
The first British contact with Tibet was the visit of George Bogle, a Scots aristocrat, to Shigatse to investigate the possibility of trade between Tibet and the British East India Company. In 1865 the British began mapping the country.

By the beginning of the 20th century the British were fearful of a Russian invasion of India and amid rumours of growing Russian influence in Tibet whence such an assault could be launched, Lord Curzon, the Viceroy, requested negotiations with the Tibetans and the Chinese to establish trade agreements. A Frontier Commission was sent to Tibet in 1903 when the first Indian post office there was opened but as negotiations failed a British Invasion force left Gnatang in Sikkim, on 11 December 1903 and, under General Macdonald and Colonel Francis Younghusband, the Commissioner of the Tibet Frontier Commission, invaded Tibet fighting the Tibetans at Guru on 31 March 1904.
The British marched on to and took Gyantze Dzong on 6 July 1904 and arrived at Lhasa, the Tibetan capital, on 3 August. Although the Dalai Lama, the Tibetan ruler, had fled from the city, the British signed a treaty with the Tibetans and then departed the capital in late September 1904.
The British expedition had operated a number of Field post offices and these were replaced by civil post offices at Gartok (from 26 September 1906), Pharijong (opened 1905) and Yatung (from 1905). All  Indian post offices closed on 1 April 1905 except Gartok which did not operate after 1943.
I have a couple of stamps on piece in my collection which I presume are associated with the Younghusband Expedition. The first is an Indian 3p Queen Victoria definitive stamp, originally issued on 1 October 1900, cancelled by a small skeleton postmark of "LAHSSA" dated 29 August 1904 and the second is an Indian 1 anna Edward VII stamp, issued on 9 August 1902, with a similar cancellation dated 16 September 1904.

A treaty was agreed between China and Great Britain in 1906 by which the British agreed "not to annex Tibetan territory or to interfere in the administration of Tibet". The Chinese agreed "not to permit any other foreign State to interfere with the territory or internal administration of Tibet". In 1907 Britain and Russia agreed that they recognised the principle of Chinese suzerainty over Tibet and would not enter into negotiations with Tibet except via the intermediary of China.
With the overthrow of the Chinese emperor in 1910 Chinese power in Tibet fell away and Tibet entered a de facto state of independence. The exiled Dalai Lama returned to Lhasa in 1912 from India. After the establishment of the Chinese People's Republic in 1949, the People's Liberation Army entered Tibet in October 1950 and the Seventeen Point Agreement of 1951 formalised China's sovereignty over Tibet. Tibetan resistance to the Chinese grew during the 1950's culminating in the Lhasa Uprising in 1959 and the flight of the 14th Dalai Lama into exile in India.
The Dalai Lama established the Central Tibetan Administration (CTA) at Dharamsala in Hamachal Pradesh and this organisation stated it had goals of "rehabilitating Tibetan refugees and restoring freedom and happiness in Tibet". In 1972 four stamps were released which were said to be issued with the approval of the CTA and intended to be used from the Dalai Lama's compound at Dharamsala. It has been claimed that some of these stamps have been used on genuine mail although the more accepted opinion is that that is not the case. A "first day cover" is shown below which is dated 20 May 1972. The stamps themselves are attractive and colourful and depict illustrations of 4 Himalayan animals by Australians, Nelson Eustace and Ted Roberts. I view them as Indian local stamps and find them to be very interesting and attractive and have a page set aside in my collection for them and a second set which appeared in 1974.
The second set is said to have commemorated the centenary of the UPU but is clearly a propaganda issue in support of the Dalai Lama and Tibetan independence. This second issue again consists of 4 stamps which are as colourful and attractive as the stamps of the first issue but this time depict the Thekchen Choling Temple, a map of independent Tibet, the Potala monastery in Lhasa and the one time Tibetan national flag. All 4 stamps include a portrait of the 14th Dalai Lama:- 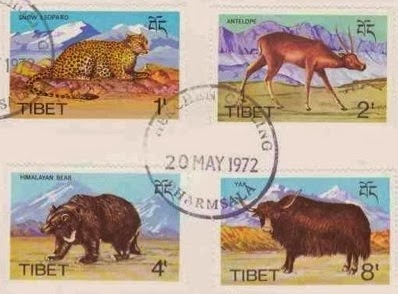 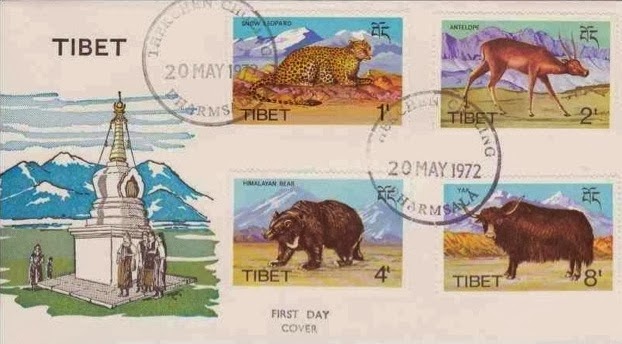 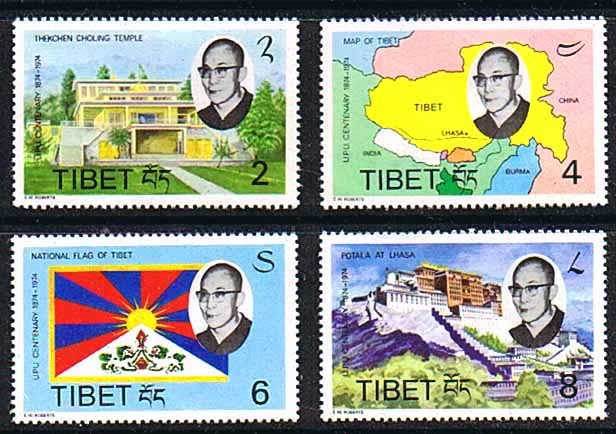 One further philatelic tie-in between a Commonwealth country and Tibet is the issue on 21 September 2009 of 2 personalised stamps by New Zealand Post which commemorated the 50th anniversary of the Chinese invasion of Tibet in 1959. The stamps were produced by the sponsorship of a New Zealand group called the Friends of Tibet which had been campaigning since 1986 in support of the exiled Dalai Lama and had been involved in pressing for visits to New Zealand by the Dalai Lama. A number of these stamps were used postally but when the New Zealand government became aware of them there was fear that they may damage relations between New Zealand and The Chinese People's Republic and New Zealand Post not only refused to print more but also omitted them from the 2009 year pack of personalised stamps ensuring that the 2 items were rare and sought after. 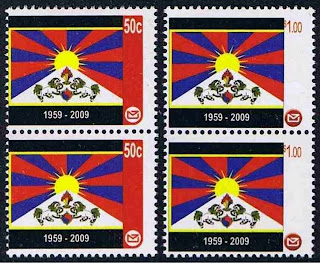