367. Commonwealth Philatelic Diplomacy War Between The Two Chinas Hots Up 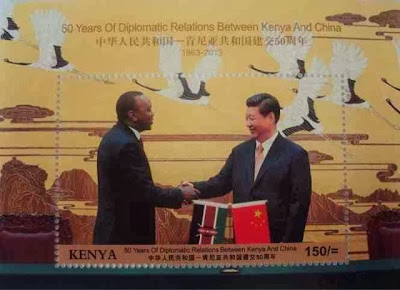 I have previously mentioned an issue from Kenya which commemorates the 50th anniversary of diplomatic relations between Kenya and The People's Republic Of China and it now appears that the issue consists of 2 stamps (depicted below) and 1 miniature sheet (illustrated above). The date of issue was 20 December 2013 and the issue was a gift to the Kenya postal service from The People's Republic. We have seen a large number of similar items gifted by The People's Republic to other Commonwealth countries in recent years and which commemorated various anniversaries of diplomatic ties between China and the respective countries.

Meanwhile a joint Taiwan (Republic Of China) - St. Kitts announcement made on 29 January 2014 described the issue of 8 stamps by St. Kitts which had been given to the Caribbean Island by Taiwan to commemorate the 30th anniversary of diplomatic relations between the 2 countries. This issue is similar to those such as the above issue made by various countries to commemorate their diplomatic relations with The People's Republic Of China and seems to represent a response to the numerous issues provided by The People's Republic, a sort of philatelic-diplomatic warfare. I do not yet know the precise date of issue of the St. Kitts stamps nor do I yet have a very satisfactory illustration but the designs apparently depict St. Kitts local scenery. 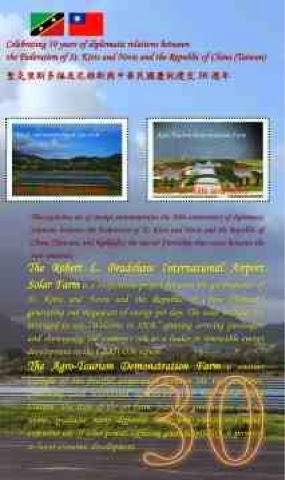 Australia Post will issue a set of 5 stamps and 1 miniature sheet inscribed "Australian Antarctic Territory" on 18 February 2014 to commemorate the centenary of the Australian Antarctic Expedition. The issue was designed by Andrew Hogg Design and lithographed by RA Print:-

Gibraltar issued a set of 6 stamps on 19 February 2014 to commemorate the centenary of the beginning of the First World War. The set is similar to that which Isle Of Man also issued on 19 February 2014 and is equally disappointing because the design consists entirely of a photograph with a poppy pushed up one corner and some lettering added. The stamps appear to have had very little effort put into their designs - to me they are more exploitative rather than honouring the brave people who fought in the war. Surely the designers,The Westminster Collection, could have produced something more memorable to commemorate this important anniversary. The set was lithographed by BDT International:- 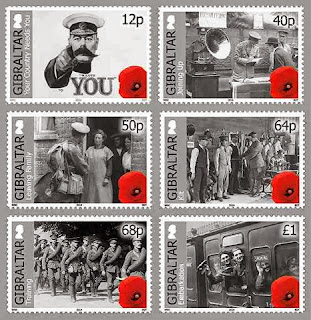 Something very much more memorable is the excellent set of 4 stamps from Falkland Islands which will be released on 25 March 2014. The set is the second issue on the subject of "Penguins Predators and Prey". The designs consist of excellent original artwork and are colourful, interesting, amusing and look as though a fair bit of work was put into preparing  them rather than just someone sitting in front of a computer and manipulating a photograph and adding some lettering. 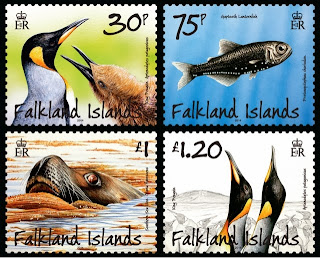 Pitcairn Islands will issue 1 miniature sheet on 27 February 2014 which depicts albatrosses of the territory. The issue was designed by Donna McKenna and lithographed by Southern Colour Print:- 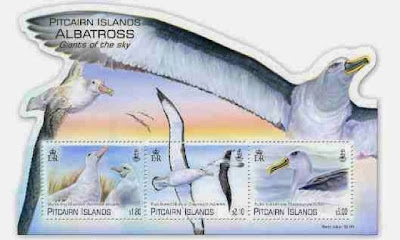 On 15 January 2014 Vanuatu and Fiji released a joint issue which took the form of a se-tenant strip of 3 Vanuatu stamps joined by a label to a strip of 3 Fiji stamps which commemorated the completion of the underwater cable between Vanuatu and Fiji. The designs were by Denise Durkin and the stamps were lithographed by Southern Colour Print:- 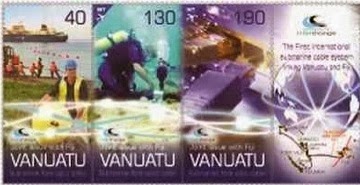 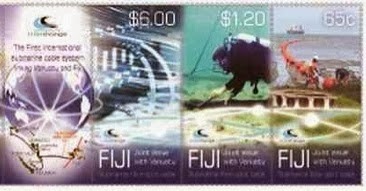 The latest Stamperija products require no comment  save that they appear to have nothing to do with serious stamp collecting. The company has announced that it produced 8 sheetlets each composed of 4 different "stamps" and 8 miniature sheets on behalf of Uganda with a stated date of issue of 25 November 2013. The subjects of the sub-sets are Butterflies, Dinosaurs, Turtles, Orchids, Owls, Minerals, Domestic cats and World Wildlife. Bizarrely, the designs of each stamp depict stamps of foreign countries and the borders of the sheetlets carry the cheeky inscription "World In Stamps":- 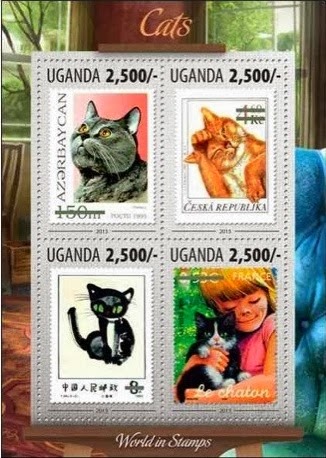 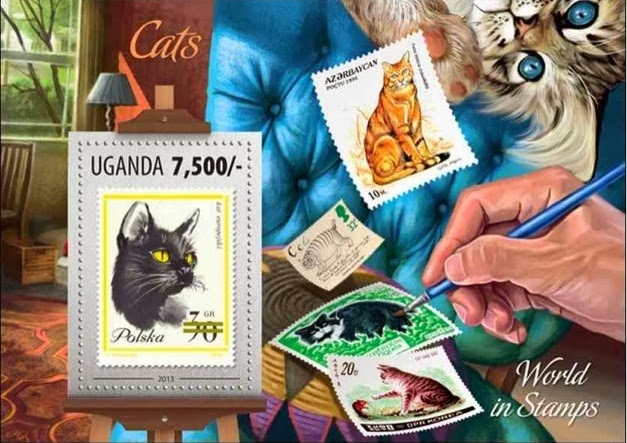 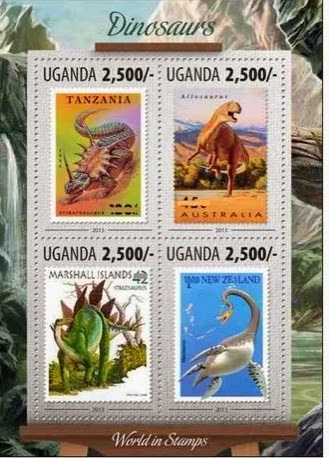 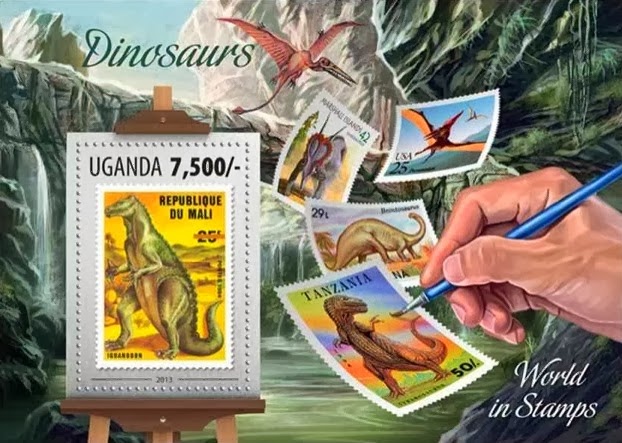 Stamperija also attempts to increase its financial profits by announcing the issue of 9 sheetlets each consisting of 4 different "stamps" and 9 miniature sheets on behalf of The Solomon Islands which are said to have been issued on 22 November 2013. The subjects of the sub-sets are Fossils and dinosaurs, Australian Mushrooms, the Lunar new year (year of the Horse) - said to be sold out (who is spending their money on this stuff?), Butterflies and orchids, Wild cats of the world, Fish of The Solomon Islands, Birds of prey, Killer whales and Turtles:- 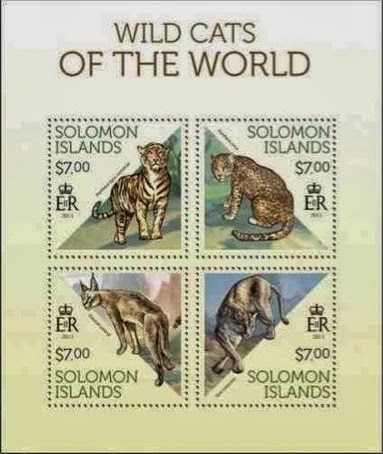 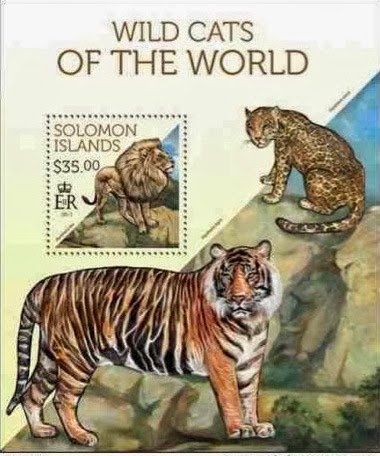 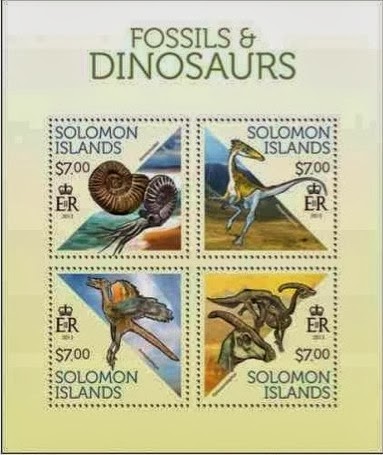 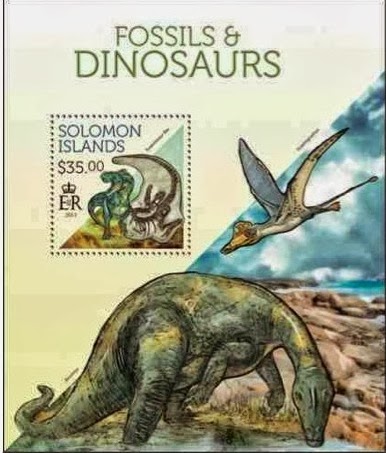 I'm very pleased to note that in the Catalogue Supplement of the March 2014 edition of Gibbon's Stamp Monthly the catalogue editor has consigned a large number of "issues" from Tuvalu which were said to have been released from 2010 to 2013 to the Appendix section and not given them full catalogue status (7 issues from 2010, 15 issues from 2011, 4 issues from 2012 and 5 issues from 2013). The excluded issues generally appear to feature subjects which clearly have no relevance whatsoever to Tuvalu but if that is the basis for their exclusion there is clear editorial inconsistency since some of the issues that have been given full catalogue status have little or no direct relevance to the islands and are somewhat exploitative.
There is also another strange inconsistency in that the issues of St. Vincent And The Grenadines listed in the same supplement are all given full catalogue status although a number of them are on subjects similar to the excluded issues of Tuvalu and are equally irrelevant to St. Vincent as they are to Tuvalu. Why not follow the same line with St. Vincent "issues" as has been followed with those of Tuvalu? Still it's a good start. Let us hope that the editor will now begin to withhold catalogue status to many more exploitative issues which have been issued in the name of such countries.
How pleased I am to have relegated all philatelic exhibition "Post and Go" stamps to "footnote" status in my collection which means that I save a vast amount of money by not buying them and I am particularly pleased that I decided to do this from the beginning of 2014 since the Royal Mail
stand at 2014 Spring Stampex exhibition seems to have managed to produce an enormous number of new varieties from the new machines set up there as well as dealer pre-ordered over-the-counter versions. The latest Norvic Philatelic Blog, as always gives an excellent account of the latest varieties and as far as I can see, if we ignore the coding of the different machines, we have 12 new "Machin head" Post and Go's (they have the additional inscription "Stampex 2014 19-22 February" and come with and without "MA13"), 12 new "Union Jack" "Post And Go's" (no additional inscription but from the new machines and with or without "MA13") and 6 new "Spring blooms" stamps (from the new machines with "MA14"). This is a total of 30 new stamps sold only at the exhibition for 4 days only at a cost of £32.30p - these are expensive exhibition souvenirs not postage stamps.

On 2 February 2014, India issued 3 stamps and 1 miniature sheet which combined all 3 designs to commemorate the bicentenary of the Indian Musem in Kolkota. The stamps were printed by Security Press, Hyderabad:- 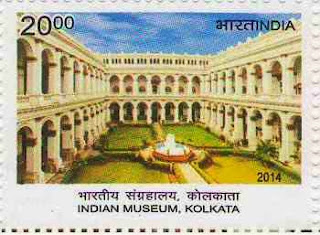 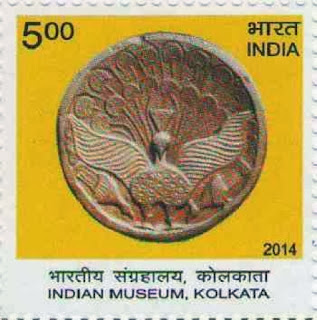 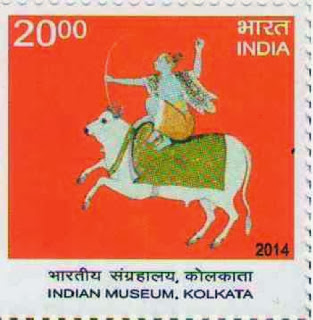 and 2 stamps were released on 8 February 2014 to commemorate the musician, Jagjir Singh. This issue was also printed by Security Printing Press, Hyderabad:- 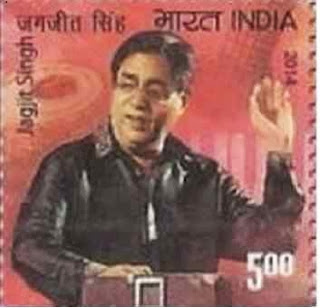 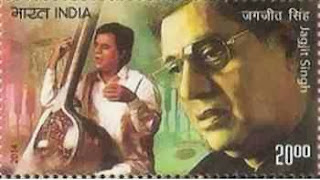