Two stamps issued by Nigeria during 2013 are currently being offered for sale on an Internet auction site. The stamps depict flowers as well as the national flags of Nigeria and Philippines and probably are part of a Nigeria-Philippines joint issue. Notably both stamps seem to include a hologram which is now a common feature of new Nigerian stamps. The precise date of issue is not yet known:- 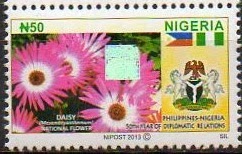 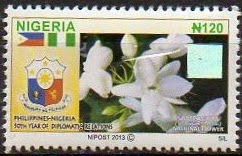 Apart from the Stamperija-produced philatelic items mentioned in the previous Blog, Uganda has also had some items produced on its behalf by its New York-based philatelic agent. Thus there is a sheetlet of 4 different stamps which commemorates the "Brasiliana 2013" Philatelic Exhibition and the subject of the designs is "Animals of South America". Really, you would have thought that Uganda had enough of its own interesting wildlife to depict on its stamps without having to show jaguars and tapirs on them. A definite "Footnote Issue". 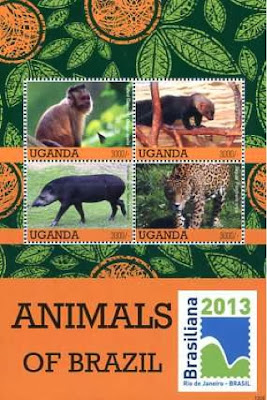 Meanwhile, from Tuvalu, 2 sheetlets have been produced which commemorate the late Nelson Mandela - one consists of 6 different stamps and the other contains 6 identical stamps:- 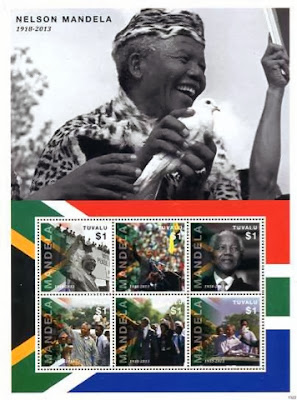 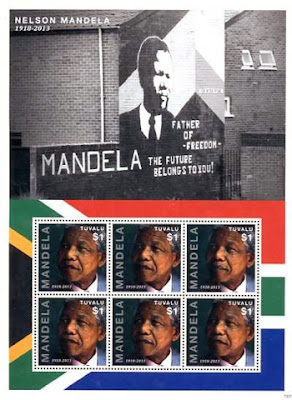 An issue that I have never seen before but just chanced upon recently while looking at various Internet sites is the single $20 stamp from Guyana which is thought to have been issued some time in 2003. It is a value of the birds definitive set which depicts an Egyptian goose and which has been overprinted to commemorate the 50th anniversary of the Bahai faith in Guyana. This must be very rare as I have never seen it offered by any dealer. There must be a lot of unknown stamps from countries such as Guyana out there and it is certainly worthwhile keeping an eye open for items such as this. This is rewarding, real philately and very different from the collection of expensive labels produced by cynical exploitative so-called philatelic agents. 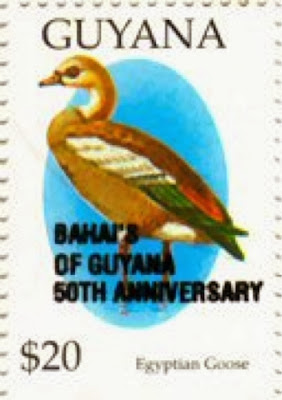 Elsewhere I found another stamp about which I had not previously known - the stamp depicts Adrian Thompson, a mountaineer, with Mount Roriama, the highest point in Guyana, in the background. The mountain is thought to have been the inspiration for Arthur Conan Doyle's novel "The Lost World". In fact, the stamp is part of a curious sheetlet of 9 different stamps which was issued in 1993 and which mainly depicted various forms of transport most of which had no real relevance to Guyana which is probably why I ignored the issue. However this single stamp within the sheetlet is highly relevant to Guyana because Adrian Thompson led an ascent of Mount Ayanganna when Guyana achieved independence in 1966 and a flag raising ceremony has been held annually on 22 February, the eve of Independence Day, on Mount Avanganna since then. 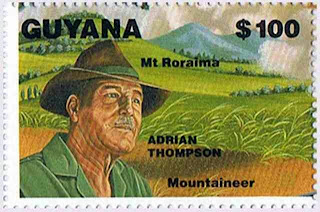 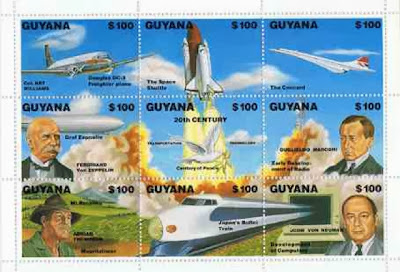 Other famous Guyanese can be found in other similar sheetlets also issued in 1993. The other stamps in the sheetlets again depict foreign celebrities or subjects of no relevance to Guyana but the individual stamps of local interest do seem worth including in a collection of modern Guyana stamps. One of the stamps depicts the Guyanese cricketer, Rohan Kanai and another locally relevant stamp from yet another sheetlet depicts Desmond Hoyte, former prime minister of Guyana. The date of issue for these stamps is recorded as 25 July 1993. 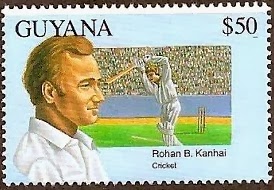