252. Cruising To Pitcairn and Malta; New Year In Bhutan.

From Pitcairn, four $2 stamps issued on 24 April 2013 which depict cruise ships which have visited the territory. The ships shown on the stamps are The Arcadia, The Constaneo Romantica, The Pacific Princess and MV Marina. The designs are by Denise Durkin and printing is in lithography by Southern Colour Print. Pitcairn followed up by issuing a miniature sheet on 29 May 2013 which contains 3 stamps depicting lobsters of Pitcairn, with the same designer and printer as the ship set:- 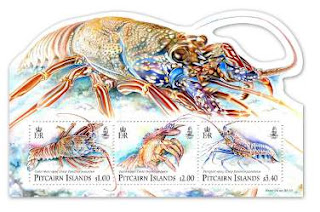 Malta issued 3 stamps on 20 May 2013 which also depict cruise ships which have visited that island in commemoration of the European Maritime Day conference being held in Malta from 21 to 22 May 2013. The values are 26c, 51c and 97c and the stamps are designed by MaltaPost p.l.c. and lithographed by Printex. Thankfully on this occasion the Maltese Post Office has not issued 88 stamps showing different visiting ships which of course is the number of stamps which it issued in 2012 to show Malta Convoy ships.

There are 2 new issues from Bhutan. The first which appeared on 10 October 2012 is a sheetlet of 6 different stamps and 1 miniature sheet which commemorate the 50th anniversary of the Bhutanese postal service:- 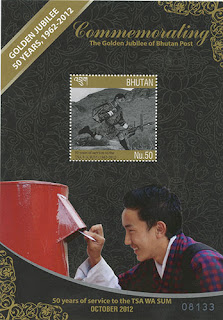 and, more recently on 11 February 2013, a single stamp and a miniature sheet were issued to commemorate the lunar new year, the Year of The Snake:- 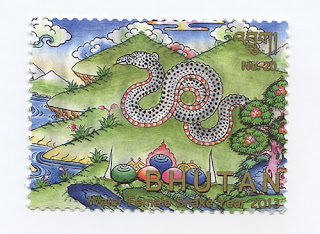 I very much like all of the above stamps and will be glad to include them in my collection.
Posted by White Knight at 08:58