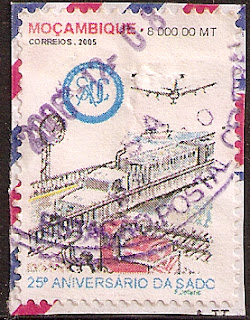 Following on from my previous blog, among the various Mozambique surcharges that I recently obtained was an example of the 25th anniversary of SADC stamp, issued on 11 August 2005, used on piece, which I did not previously have in my collection. I had only once seen this being offered for sale about the time of the date of issue, by a British dealer who lists huge numbers of worldwide new issues for sale but  not infrequently is not able to fill the order, and indeed this particular stamp was never supplied to me and the money I had paid was used to pay postage on price lists which were sent to me even though I did not particularly want them! Therefore I was rather pleased to obtain this apparently rare stamp even though this particular example may be described as something of a "space-filler".
Of the surcharges I have recently obtained, there is a 10000 MT surcharge on one of the crustacean stamps which were originally issued in 1981. I have included an illustration of another value of the set in a previous blog - here the surcharge takes the form of the overprint "CORREIOS - 2000" beneath the added value and a large black bar which obliterates the old value:- 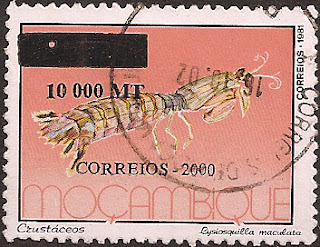 Another form of surcharge is this 5000mt on 10.00 MT "Ricinus Communis" stamp where the surcharge is in very fine print and the "t" at the end of the surcharged value is deformed and more like an acute accent over a letter "i" than a letter "t":- 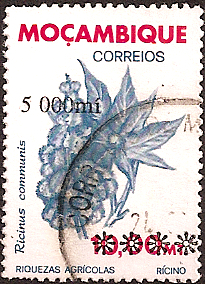 Another example of a surcharge on a stamp from the 1998 "traditional housing" set is depicted below in which the 3000 MT surcharge is combined with *** which obliterates the old value, in this case 15000 MT:- 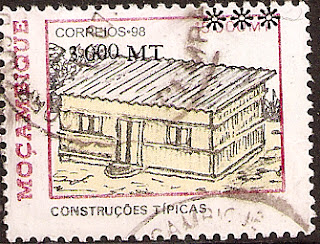 Finally, some examples of values from the plants set which was originally issued on 9 October 1998 with various surcharges. Below is depicted the 12500 MT value of the set with the original value obliterated by a silver bar and a surchatge of 33000 MT added. The left hand example was easily obtained in an unused state from an ordinary new issue dealer but it appears to exist with different shorter and thicker numerals as shown in the right hand illustration. These surcharges are thought to date from 2005:- 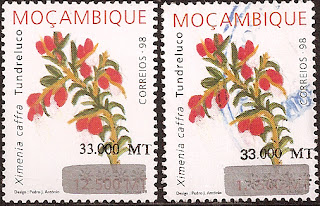 Another value of the set, the 7500 MT revalued to 33000 MT, is depicted below with 2 different surcharges applied - on the left is an example, again presumably from 2005, with obliteration in silver and numerals in the same format as in the left hand stamp above but on the right, obliteration of the old value has been carried out by means of applying ****:- 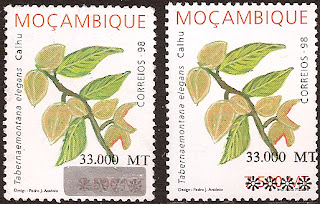 My search for Mozambique provisional surcharges continues.
Royal Mail transported "Post and Go" Hytech machines A3 and A4 on their first trip overseas to the Australia 2013 Stamp Expo and visitors to the Royal Mail stand there were able to obtain exhibition souvenirs in the form of Post and Go labels, in either the Machin head or Union Jack formats, which were inscribed "Australia 2013 Stamp Expo". Since these were clearly souvenirs rather than postage stamps for use on mail (one can not send mail by Royal Mail service in or from Australia which is the only place where the stamps were being sold) I shall not be spending money on these items. However, back in Edinburgh, the Royal Mail Philatelic Bureau is selling "collectors' strips" (again, both Machin head and Union Jack types) in connection with the Australia exhibition but with a different inscription from the stamps sold at the exhibition itself - the stamps sold in Britain are inscribed, "Australia 2013 World Stamp Expo".  These stamps are produced by Hytech machine B1. I guess that because these are sold in Britain to anyone who places an order with the Edinburgh philatelic bureau they are available to be used for postage and therefore are true postage stamps and can therefore be reasonably included in a collection of postage stamps. Mozambique provisional surcharges seem to be much more straightforward than the items currently produced by the British postal service!