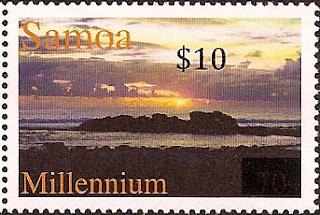 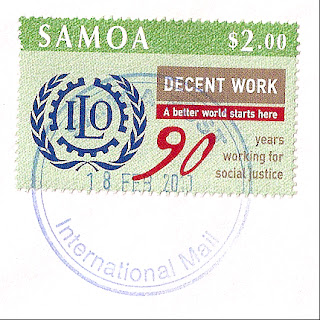 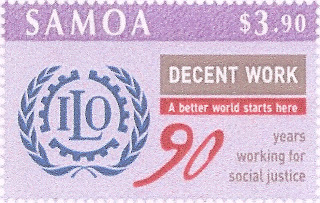 As described in Blog no 205, the New York-based philatelic agency, Philatelic Collector Inc, took over responsibility for all aspects of the production, promotion and sale of the stamps of Samoa in December 2012. To some people this seemed to be a rather worrying development since in the last 3 years or so the same agency had gained control of the stamp issues of Cook Islands and Tonga with the result that
a relatively large number of stamps, which some people thought to be excessive, and some with very high face values, were produced on behalf of those territories. Samoa appeared to be on the same route as Tonga and Cook Islands with the rapid issuing of 3 sets of rather poorly designed and printed stamps.
Prior to this development Samoa seemed to have had a pleasingly conservative new issue programme which included a number of truly excellent designs prepared for the territory by New Zealand Post. But for several years the situation was clearly deteriorating in that the number of stamps issued declined greatly and those that did appear seemed to be produced by unusual sources for Samoa, for instance the peony and 2008 Olympics miniature sheets which appeared to have originated in China and were presumably donated, or perhaps sponsored, by China since they were connected to events in China. It looked as though the Samoa Post Office, like a number of other territories, could not afford to pay for the production of new stamps although they pulled out all the stops to commemorate the highly important 50th anniversary of Independence with an excellent set from New Zealand Post.
In that context then, the intervention by Philatelic Collector Inc. is a sort of bail out for the Samoa Post Office - at least they will have stamps prepared for them even if they are not necessarily what they and stamp collectors would like to see. Evidence of the need for some sort of solution to what is clearly a financial problem for the Samoa Post Office which brought them to the door of Philatelic Collector Inc.  is also provided by 2 further issues made in 2009 and 2011 about which I was not aware until I looked at the shop website of Steven Zirinsky, a great Pacific area expert. There I found he was illustrating and offering for sale some covers which were stamped with an issue which was released on 27 April 2009 to commemorate the 90th anniversary of ILO. 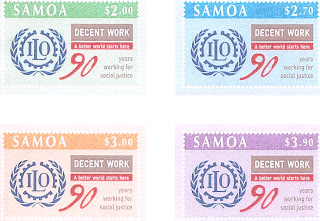 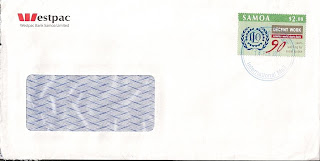 The stamps are very atypical of what we have seen from Samoa in recent years and clearly the commemoration of this particular anniversary is rather surprising given the huge range of subjects which the Samoa Post office has not commemorated in recent years - one really struggles to believe that the 90th anniversary of the International Labour Organisation is of such great significance
to the territory that it warrants a stamp issue more than a good number of other subjects we could think of. Perhaps this was also a donated or sponsored issue. I have not seen it advertised by any dealers on E Bay or Delcampe, nor has it been mentioned in any British philatelic magazines and Stanley Gibbons do not seem to be aware of it as it has not been listed in the new issue supplement of Gibbons Stamp
Monthly. Nor have I seen any British new issue dealers offering it for sale but I do see that the issue has been give a number by Scott  and there are in fact 4 values in the set (Scott nos 1122 - 25). I have found a joint Samoa-ILO statement from 2009 which announced the issue of the stamps and included an illustration of them and I show this above with Steven Zirinsky's website cover illustration as well as a close-up of a stamp on one of the covers. I have bought (and rapidly received) one of the covers from Steven Zirinsky as well as another item of which I had not previously been aware - a set of 8 surcharges produced in 2010 or 2011, shown below:-

As can be seen, these are surcharges on the Millenium commemorative stamps and I think the need to issue surcharges suggests that stamp availability in Samoa must have been becoming difficult. Again, I have seen no mention of this issue in any of the British philatelic media but I see that Scott has acknowledged the issue and allocated them the catalogue numbers 1129 - 36.
Clearly, Samoa needed to go somewhere to continue to be able to have stamps available for postal usage and the new agency which they use provides them with stamps and if we stamp collectors do not like the stamps we really do not have to buy them. So far, I have bought the Christmas sheetlet since it was reasonably priced and the waterfall issue but chosen not to buy the Chinese New Year issue because it really does not seem to have any relevance to Samoa and, in my opinion, the design is pretty poor. I have long given up striving for completion but am perfectly satisfied with a representative collection of issues which tell me about the country whose stamps I am buying. However, I find it satisfying and thrilling when I discover what are to me previously unknown issues, as I have on Steven Zirinsky's site and now I have a new goal - that of tracking down a set of the ILO stamps. What fun!
Meanwhile, there are new issues from Guernsey. On 29 May 2013 the Guernsey Post Office will issue a set of 6 stamps and a £12.36 prestige booklet with the name of the island of Alderney  printed on them which commemorate the 60th anniversary of the coronation of Queen Elizabeth II:- 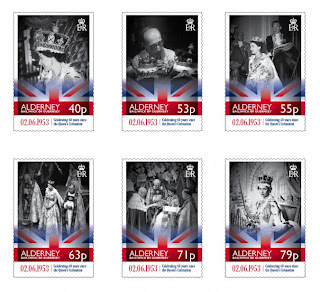 I have previously mentioned the miniature sheet which was issued on 20 February 2013 and which depicts the gold post box on the island of Sark which commemorates the island's 2012 Olympic gold medal winner, Carl Hester who won the medal in the Team Dressage event. It is an attractive item and reasonably priced at just £1 though this unusually low face value for a Channel Islands miniature sheet may have something to do with the fact that the Guernsey Post Office generously gave away these miniature sheets entirely free of charge to their standing order customers. The item was designed by Bridget Yabsley and lithographed by BDT International Security Printers:- 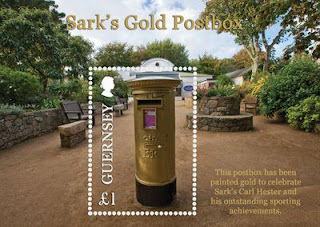 On 29 May 2013, yet another island of the Guernsey Bailiwick - Herm - will be featured on a set of 6 stamps designed by Bridget Yabsley and lithographed by Lowe Martin:- 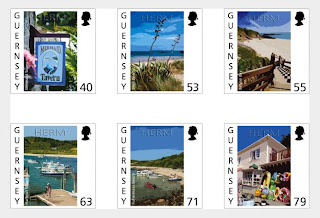 A set of 6 stamps and 1 miniature sheet which combines all 6 values will be released by Guernsey on 8 May 2013 as its contribution to the annual "Europa" issues. All values depict postal vehicles which is the 2013 Europa theme but strangely and unnecessarily the set does not only feature vehicles in Guernsey but also in Germany, France, Great Britain and USA:- 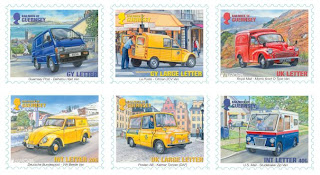 Papua New Guinea continues to issue interesting sets which depict all aspects of local life - culture, scenery, wildlife, social and political aspects, and I find its issues thoroughly worthwhile except that there are too many issues which are too expensive and of course there is also the problem of the issues which its foreign philatelic agent forces on it which usually are entirely to do with American culture and nothing to do with Papua New Guinea. Actually, the foreign-themed items do not bother me that much because I have never bought any of them which leaves me with a fascinating collection of local issues which is like an encyclopaedia of Papua New Guinea. For the record, the latest foreign agency issue was released on 13 March 2013 and commemorated the former President of The USA, Kennedy, who was assassinated in 1963:- 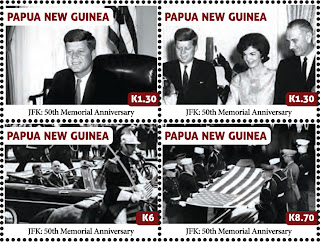 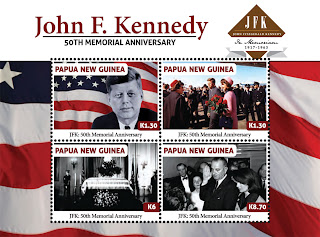 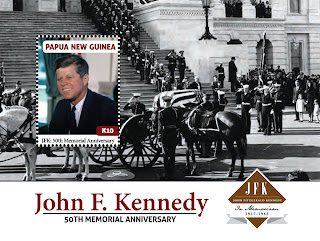 With that issue behind us, we can celebrate the local Papuan new issues by noting that the 6th set in the annual "pioneer art" series was released on 20 February 2013 and depicted the sculptures of Gigmi Kundun. The set of 4, m.s. of 4 different stamps and single stamp miniature sheet show different pieces of work by the artist. The sculptures have fascinating local themes and an intriguing style - I particularly like the bird of paradise on the 8.70 value and the fish on the single value miniature sheet:-

The Pioneer Art set was designed by Peter Apa and lithographed by Henan Post Printing Factory in Zheng Zhao in China.
The theme of a set issued on 13 March 2013 is a little more mundane - that of "root crops". The subject does not really allow for particularly glamorous designs but because they illustrate items of local economic importance they inform the collector about life in Papua New Guinea and at least one of the stamps which depicts a large pink vegetable which resembles a pound of liver more than any vegetable I know is weirdly interesting. The issue was designed by Billy John Telek with the printing details being the same as for the Pioneer Arts issue. Once more the set consists of 4 stamps, a m.s. of 4 different designs and a single value miniature sheet:-