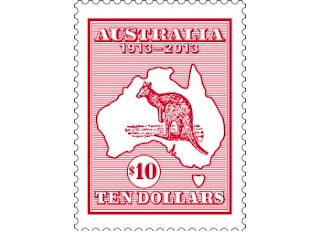 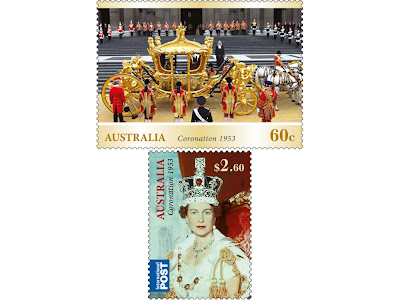 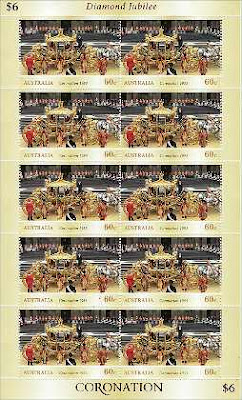 Most new issues which have recently been released by Australia Post are related to the Australia 2013 International Stamp Exhibition which coincides with the centenary of the issue of the first Commonwealth Of Australia postage stamp, the 1d red kangaroo and map design which first appeared on 2 January 1913. The exhibition ran from 10 to 15 May 2013. Prior to that there had been 2 issues not previously mentioned in this blog which were released during April 2013.
On 9 April 2013, 2 gummed stamps and 1 self-adhesive stamp from a small sheetlet were issued to commemorate the 60th anniversary of the coronation of Queen Elizabeth II. An "embellished" sheet containing 10 of the 60c value was also issued (depicted above).
On 23 April 2013, five gummed se-tenant stamps and 5 self-adhesive stamps printed in a coil, were issued which depicted Australian Botanical Gardens.
On 10 May 2013, three issues were made to coincide with the opening of the Australia 2013 Philatelic Exhibition:-
a $10 stamp and miniature sheet and intaglio-printed miniature sheet (sold in a pack for $15! - face value plus 50% - something I won't be buying) which commemorates the centenary of the kangaroo and map stamp. I'm not sure why it was felt appropriate to produce an intaglio-printed version of the miniature sheet since the original stamp was printed in typography, presumably the clever people at Australia Post thought that something printed in intaglio would have a superior appearance to it which would justify a 50% mark-up in sales price above face value.

a gummed 60c stamp and a self-adhesive stamp from a booklet to commemorate the popular race horse Black Caviar and her achievement of winning 25 races:- 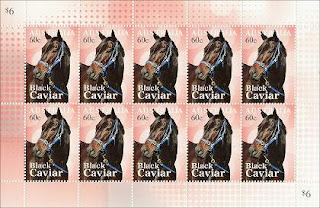 and, finally on 10 May, two gummed stamps released as a joint issue with Israel to commemorate the Battle of Beersheba.
On 11 May 2013, there were 2 further issues. The first featured birds, named pardalotes, and appeared as 4 gummed stamps, a 60c self-adhesive in coil format and a $1.20 self-adhesive from a sheetlet of 5 as depicted below:- 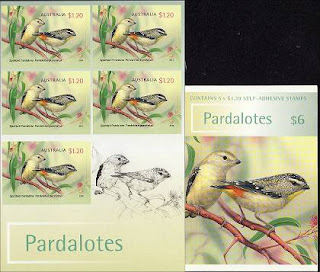 The second issue of 11 May 2013 comprised 2 gummed stamps and a miniature sheet which commemorated the centenary of the first banknote of The Commonwealth of Australia:-